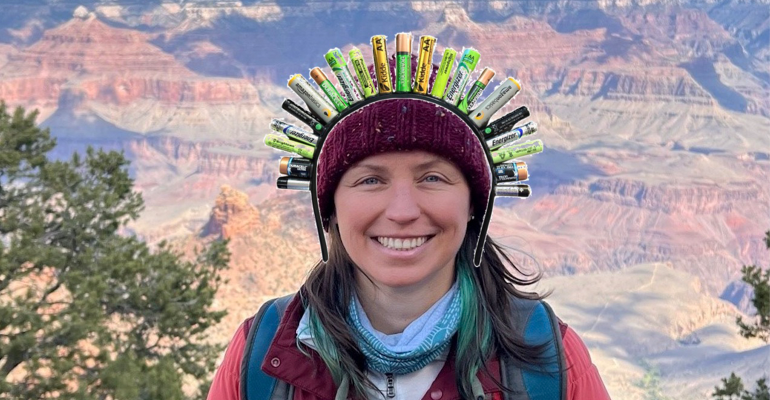 As we enter the holiday season, there’s no better time than now to discuss batteries and the dangers they can present to waste and recycling workers if disposed of improperly. Read on to find out what “The Battery Queen” has to say about battery disposal, and where we stand as an industry with facility fires. 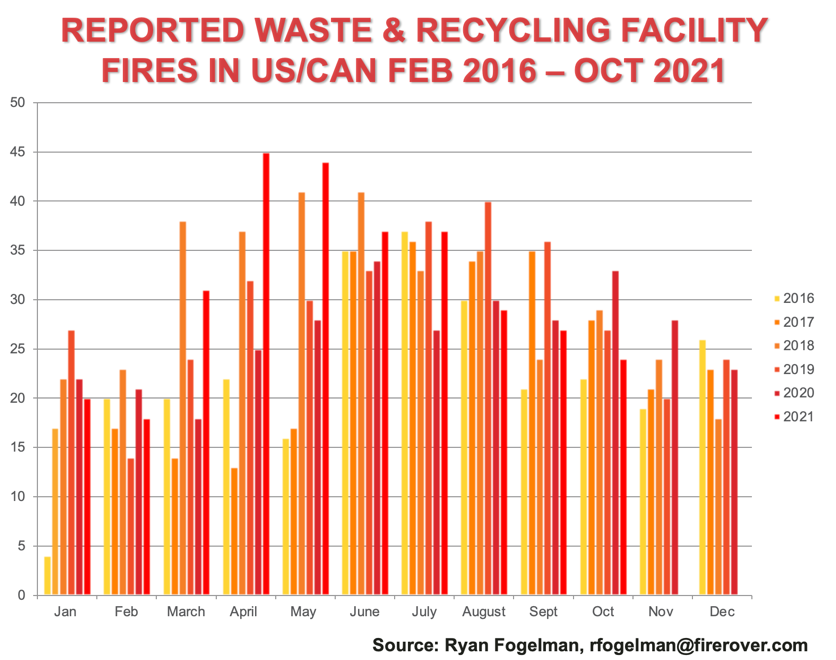 I would typically say that the 24 publicly reported fires that I found using Google Alerts would be pretty accurate, but unfortunately, there was an outage to the system this month. I didn’t receive alerts for my keywords of “fire” plus “MRF,” “waste management,” “shredder” and “transfer station” from October 12 to October 18. This turned out to be a highly documented outage that occurred across the entire platform. However, I did try to supplement the incidents with direct searches, which is how I came up with the final number.

Even with the lower numbers in September and October, we are unfortunately still on pace for 2021 to be the worst year for publicly reported fire incidents since I began tracking these fires in 2016. I can assure you that I have my eye on this number and look forward to the end of the year where I consolidate the 2021 data and insight for the next “Waste & Recycling Facility Fires Annual Report.” 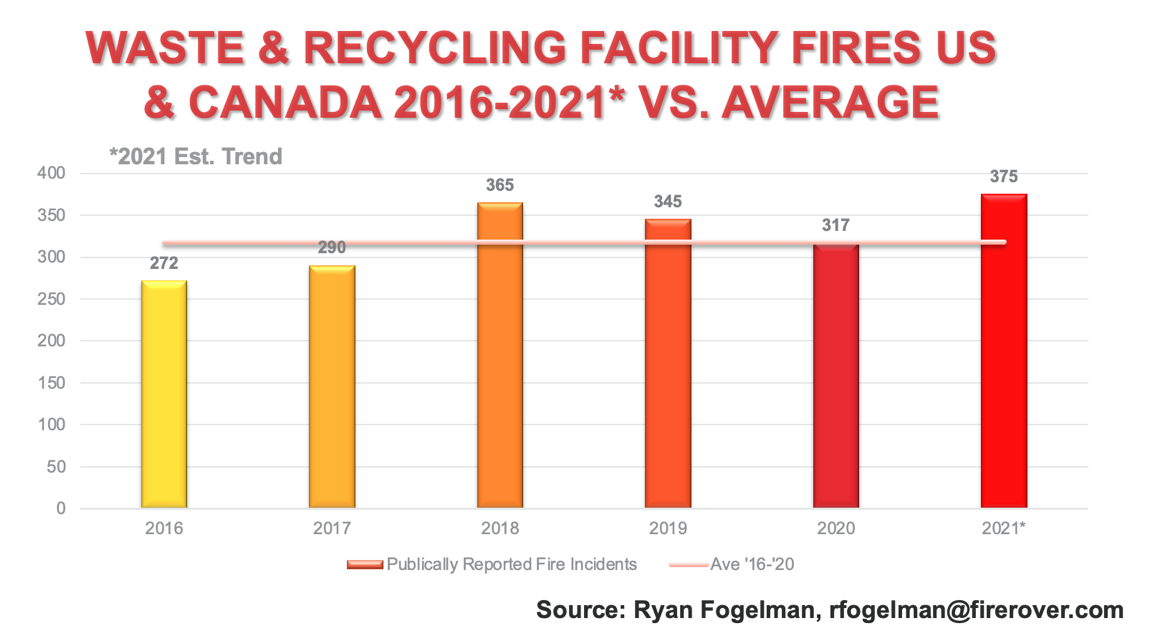 Educating the Public on the Hazards of Batteries

Over the years, I have developed a strong belief that our waste and recycling operators are falling victim to the public’s love of batteries. As I mentioned in several previous articles, I estimate that the cost of fires to the waste and recycling operators and to the fire professionals who are forced to fight these fires is more than US$1.2 billion annually. I arrived at this number by using Eunomia’s UK actuals as the basis of my assumption.

I believe there are three critical forces that go into ultimately solving our problem: 1) implementing technology, 2) following operational best practices and 3) educating the public about the dangers batteries can cause when improperly placed in our waste and recycling streams.

Earlier this month, I was on a panel with Courtney Scott, household hazardous waste (HHW) program manager for Zero Waste Sonoma, and I felt that her effort and insight would be a positive for those who read my articles. Throughout her career, Scott has been involved with several different environmental nonprofits and organizations including a stint at AmeriCorps. She has worked in HHW for 10 years, five of those years with the city of San Rafael, Calif., Fire Department managing the Marin County HHW facility and five years with Zero Waste Sonoma managing the Sonoma County HHW facility, e-waste programs and oil payment program.

Ryan Fogelman: Why is it so hard to collect batteries from consumers?

Courtney Scott: I am amazed every day by how prolific batteries are and how difficult it is for the community to collect and recycle them. Our HHW program is one of the most comprehensive programs in the country and yet it is still difficult for our residents to find convenient disposal options.

About 10 years ago, Zero Waste Sonoma worked with Call2Recycle and the California Product Stewardship Council (CPSC) to find retail locations willing to collect all batteries. They built up a good network of locations, but most of them have fallen off the list by now as retailers are burdened by the labor of sorting batteries and, most importantly, the cost of disposing of single-use batteries. In California, all batteries are considered HHW, but we only have extended producer responsibility (EPR) for rechargeable batteries.

Ryan Fogelman: Tell us about your HHW program?

Courtney Scott: Our HHW program includes a permanent facility in Petaluma, Calif., weekly HHW events at rotating locations across the county and a door-to-door pickup program. Zero Waste Sonoma spends at least $40,000 per year disposing of single-use batteries alone, and we also spend 60 to 80 hours per week sorting all batteries. It’s not an efficient use of our time, and we strongly believe that manufacturers of hazardous products should be responsible for their disposal/recycling and ultimately creating a closed loop system.

Ryan Fogelman: Is EPR the answer?

Courtney Scott: A few years ago, we looked into creating a new battery collection program at either retail locations or at government buildings like fire stations and community centers. However, with the uptick in lithium-ion battery fires, we realized that it would be both expensive and dangerous to have batteries collected at more locations.

During that same time period, EPR for batteries was being discussed at the state level so we wanted to see how that played out. Since a couple of different battery bills failed in recent years, Zero Waste Sonoma was approached by CPSC to see if we were interested in joining a handful of other local jurisdictions to implement our own battery EPR ordinances.

We recently brought the idea to our Zero Waste Sonoma Board of Directors in September to gauge their interest. We received support to create a model ordinance for true EPR of all battery chemistries, both loose and embedded. I’m currently working on a more specific draft ordinance based on their feedback and will bring it back to the board soon. This will be a long process, but it’s one we really believe in because batteries are so prolific.

Ryan Fogelman: Besides CPSC, who else is joining the fight?

Courtney Scott: Recology Sonoma-Marin has also decided to address the issue separately from Zero Waste Sonoma’s programs. Recology Sonoma-Marin is the waste hauler for eight out of ten of the jurisdictions in Sonoma County, and the hauler reported to me that it generally experiences at least one fire per month at its materials recovery facility (MRF) due to lithium-ion batteries. Luckily, none of them have been catastrophic, and Recology Sonoma-Marin is making an effort to remove batteries from its recycling stream by implementing a battery collection program.

With the new program, which was previously only offered in Santa Rosa by Recology and in Windsor by Sonoma County Resource Recovery, residents will tape batteries and put them into clear, sealed bags on top of their blue recycling bin on garbage days. The drivers will identify the bags and put them into a special compartment of the truck. With a focus on advertising this new service, Recology Sonoma-Marin is hoping this will reduce the number of batteries that make their way inside the bin and into the MRF. We are currently collaborating on a video tutorial to help advertise this program.

Ryan Fogelman: Why do they refer to you as the “Battery Queen?”

Courtney Scott: During a meeting about the new battery programs, a colleague jokingly referred to me as the “Battery Queen,” so I went ahead and made a little battery crown for fun. We’re throwing around the idea of using this as the mascot of our battery discussions and outreach moving forward.

I have said it before, and I’ll say it again: battery manufacturers need to be held responsible for the products they are bringing to market. I do not look at it as a penalty to the manufacturers because they are just providing a solution for the public’s never-ending thirst for more portable power. There are many producers and manufacturers that are held responsible for the costs their products cause down the supply chain. For example, if an oil company has a spill, they have to clean it up and pay for the costs. It is no different here. We need to figure out a way to get help not only for education programs but for tools for the operators and fire professionals so they can control, contain and ultimately eliminate the fire risk at our nation’s facilities.

Ryan Fogelman, JD/MBA, is vice president of strategic partnerships for Fire Rover. He is focused on bringing innovative safety solutions to market, and two of his solutions have won the distinguished Edison Innovation Award for Industrial Safety and Consumer Products. He has been compiling and publishing the “Reported Waste & Recycling Facility Fires In The US/CAN” since February 2016 and the “Waste & Recycling Facility Fires Annual Report.” Fogelman speaks regularly on the topic of the scope of fire problems facing the waste and recycling industries, detection solutions, proper fire planning and early-stage fire risk mitigation. Additionally, Fogelman is on the National Fire Protection Association’s Technical Committee for Hazard Materials. (Connect with Ryan on LinkedIn at https://www.linkedin.com/in/ryanjayfogelman or email at [email protected]