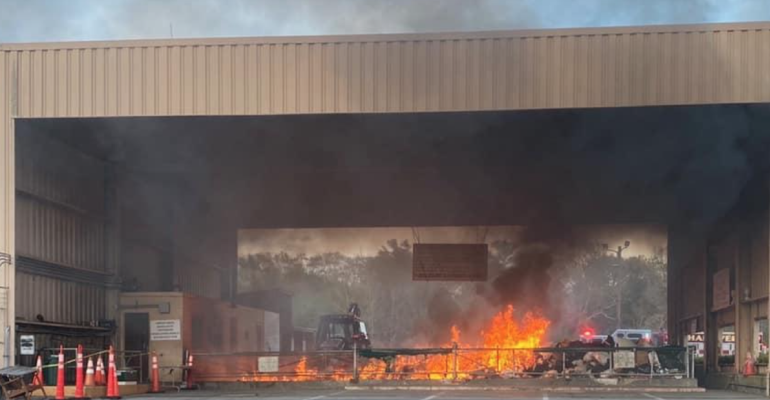 May started with doom and gloom that we were never going to get out of this pandemic. But as the weeks went on, we started to see a light at the end of the tunnel. In May, many “non-essential” businesses started reopening, joining their waste and recycling industry brethren back to the daily grind. During the month, we experienced 28 reported fire incidents at waste and recycling facilities. 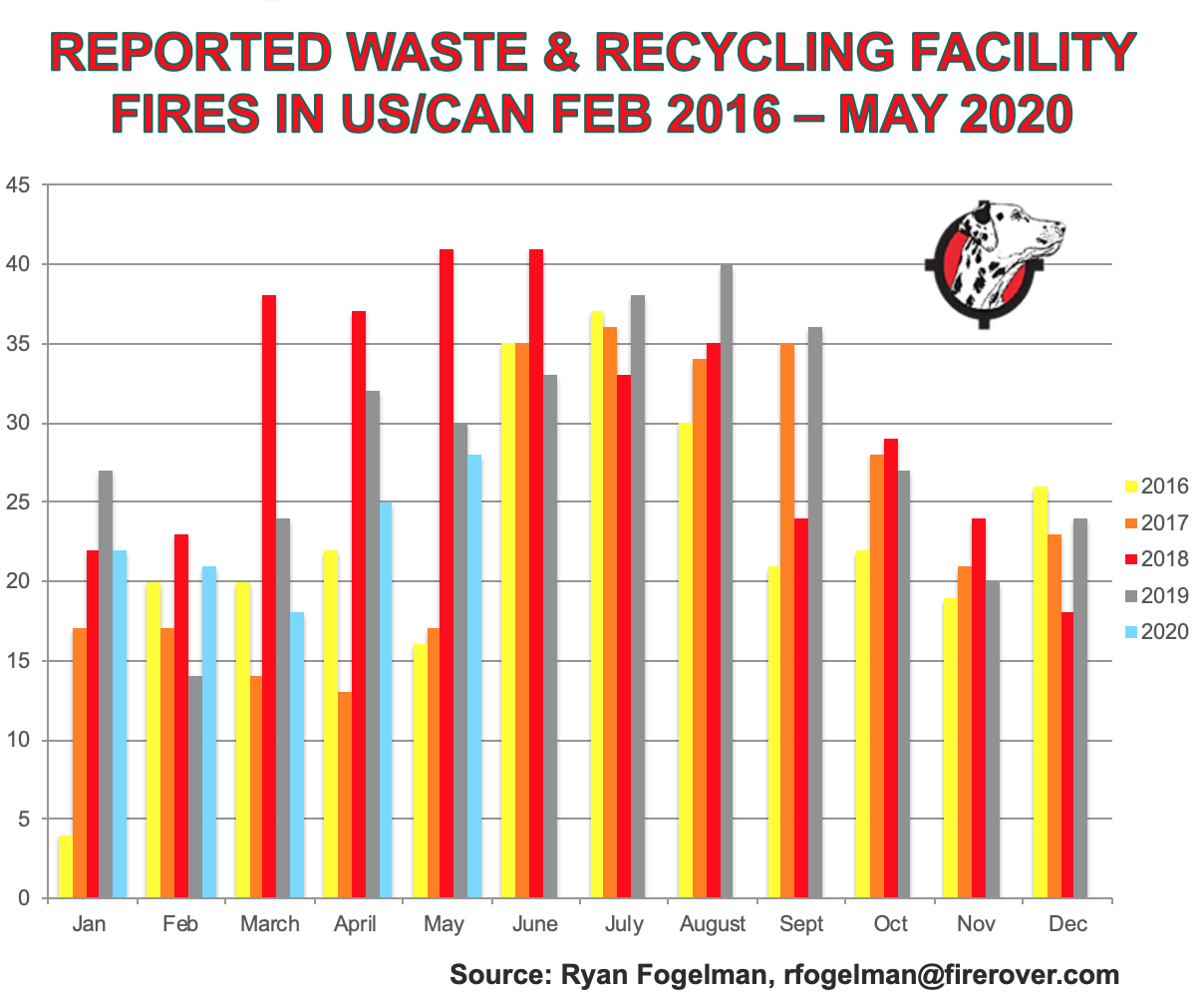 During the past 12 months, the waste and recycling industry has experienced 332 reported facility fires in the U.S. and Canada. Additionally, we incurred 48 reported injuries and five deaths that can either be directly or indirectly attributed to these fire incidents. Based on reasonable assumptions, we can extrapolate that 1,800-plus facility ﬁres have occurred during that time, which, based on the number of facilities reported by the Environmental Research & Education Foundation (EREF), is more than 40 percent of the industry. I define “reported facility fires” as any fire that has been reported by the media that occurs at a waste or recycling facility in the U.S. and Canada.Typically, the fires that are reported by the media are larger fires that require fire professionals to arrive on scene and where there are affects that the public can witness.

How Is COVID-19 Affecting Our Current Waste and Recycling Streams

Since the start of the pandemic, we have been forecasting (educated guessing) how our change in behavior would affect our waste and recycling streams. I felt early on that the transition of tonnage from commercial to household would have a negative effect on the number of incidents our waste, paper and plastic operations would experience.

In addition, after the stay-at-home orders went into effect, we experienced a significant uptick in consumer purchases that we typically do not see until the fourth-quarter holiday. We also experienced the “100-year spring cleaning,” where households organized, discarded, donated and recycled like we have never seen before. 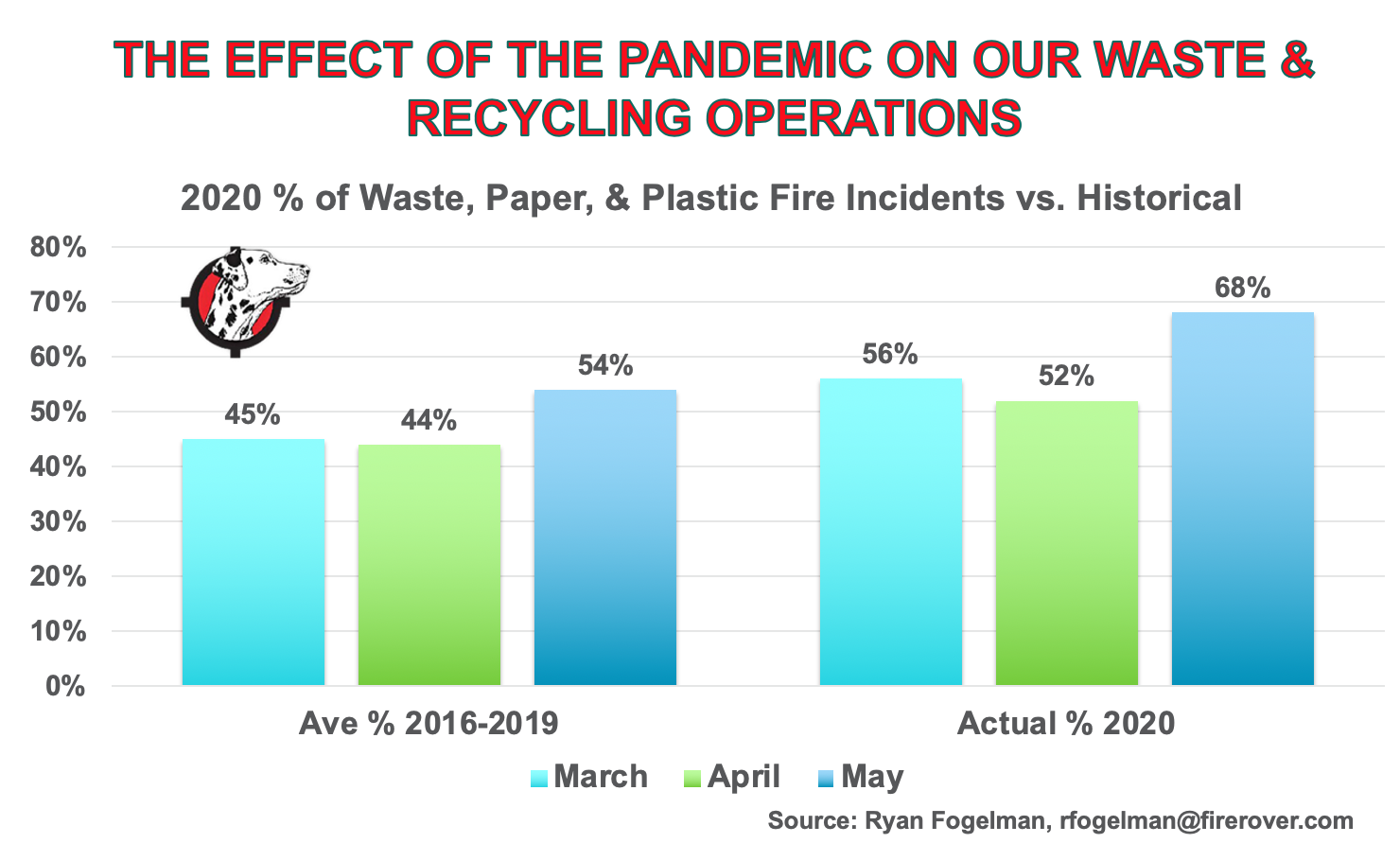 The number of fires we at Fire Rover are seeing at transfer stations has risen as well. A number of these fires were caused by lithium-ion batteries, but other hazards like old fuel tanks, saw dust, fertilizers and more are culprits as well. We need to remain as diligent as possible, especially until things start to normalize.

To gain a better understanding of the art and science of thermography for early fire detection of waste and recycling operations, I had a conversation with Andy Starnes, a level II electrical thermography certified instructor at Insight Fire Training.

Starnes has been an instructor and a captain for almost 22 years, with special experience and education involving the use of infrared and thermal technologies and fire applications. He is a thermal imaging subject matter expert who assists fire departments, industry and thermal imaging manufacturers with thermal education and training.

Ryan Fogelman: What are the pros and cons of thermal detection in fire prevention?

Andy Starnes: Thermal detection within industry today is becoming the norm and not the anomaly. Emergency services such as fire departments, police and emergency medical services have been using thermal detection devices known as TICs (thermal imaging cameras) for many years. The usage of thermal detection devices now has expanded to unmanned aerial vehicles (UAVs) like drones with which first responders can survey large areas without placing responders in danger and locate lost persons faster than traditional ground search methods.

The usage of thermal detection in UAVs now is also being used to actually fight fires from suppression, locate the edges of wildland fires and more. However, emergency services are just now realizing the value of thermal detection technologies, whereas the industrial world has been using infrared technology at much more advanced levels.

Many large corporations understand the value of condition monitoring of expensive manufacturing processes that cannot afford prolonged periods of downtime because of preventative maintenance, repair or catastrophic failures that could have been prevented or even predicted with infrared monitoring.

The construction industry is an excellent example of thermal detection usage. In the following photo (provided by FLIR Systems), a home inspector is able to quickly locate areas lacking insulation or potential moisture problems. 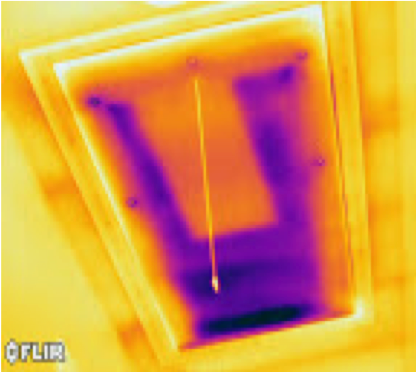 Another example of thermal detection is the early fire detection system by MoviTHERM. This system uses a series of cameras in a large laundry facility that “watches” for preset temperatures and sends an audible and visible alarm when they are detected.

Thermal detection for early fire detection is also used in refineries, electrical substations and waste facilities, like your Fire Rover solution. This is known as thermography, or the process of remote/noncontact temperature measurement.

For example, industrial thermal imaging cameras have many adjustable parameters to ensure measurements are within a certain tolerance for proper interpretation.

And there is not one specific model or brand that can “see” everything; every application has unique parameters that need a custom solution, interpretation, false positive identification and more.

Additionally, these cameras are often quantitative in nature, which equates to their measurements being more exact, whereas there are many other professions that use nonadjustable, automatic gain, infrared cameras that are qualitative in nature such as fire service thermal imaging cameras.

These cameras are designed to locate anomalies or problem areas but not for exact measurements. The importance of this was found by many consumers who purchased qualitative thermal imaging cameras and attempted to use them to screen individuals for EBT (elevated body temperatures). These devices were not designed for this use, and their measurements can be several hundred degrees in variance depending upon numerous variables or parameters that are not accounted for nor adjusted because of the fact that the device is nonadjustable in these areas.

Fogelman: How do you see this technology helping waste, recycling, scrap metal and hazmat operations?

Starnes: This technology should be mandated for condition monitoring in these types of facilities. In general, when there is a fire in these types of industrial areas, it has a tremendous negative impact on the business, the community and the environment.

I had experience with a large recycling plant fire in Newark, Calif., that caused extensive impact to the business, the community and the environment. The business suffered loss of revenue, equipment and ended up being responsible for a large cleanup effort. My suggestion is that these industrial complexes should implement condition monitoring services known as leak detection and repair (LDAR) teams. LDAR teams consistently monitor potential sources of leaks (500-700 checks per day on average), ensuring that valuable product isn’t lost, employees are not being exposed to the product and the surrounding community and environment aren’t being negatively impacted.

According to “Leak Detection and Repair—A Best Practices Guide,” in 1999, the Environmental Protection Agency (EPA) estimated that, as a result of noncompliance with leak detection and repair regulations, an additional 40,000 tons of volatile organic compounds (VOCs) are emitted annually from valves at petroleum refineries alone.

As fire sprinklers and heat detectors have been used successfully in different buildings, infrared detection of waste, recycling and specifically hazardous material operations are of critical importance in a world where industry and residential occupancies are in close proximity of one another.

Fuel tank farms are an example of this type of thermal detection and fire suppression. Many fuel tank farms have automatic high expansion foam suppression systems that are activated when infrared detectors sense a certain level of heat. These types of businesses understand that if the fire is not suppressed early on, a conflagration may ensue, causing exponential damage to the business, the community and the environment.

With the increased usage and improper disposal of lithium-ion batteries, waste and recycling facility fires are on the rise. However, while these fires may not be totally preventable, they can be limited to very small incidents instead of large-scale incidents that cause countless dollars in revenue loss, negative environmental impact and needless injuries or deaths.This early suppression through thermal detection allows for business continuity without loss of revenue or negative impact.

Fogelman: What advice do you have order to prepare for an incident?

Starnes: In the fire service, these types of buildings or businesses are known as high-risk occupancies. In order to manage or mitigate a large-scale incident, the fire suppression effort begins long before the incident ever occurs. Municipalities must have strict codes and requirements for these specific types of businesses.

One such example is the required fire flow policy, which requires a high-risk business to install either suppression systems that will suppress the fire early on in its incipient stage or large water mains that will provide adequate water flow for suppression efforts. Typically, when the business discovers the costs of installing large water mains to their facility, they opt for the cheaper and smarter decision, which is a fire suppression system such as fire sprinklers.

Many fire departments create what is known as automatic aid agreements for these types of incidents so when a response is needed, the proper amount of resources will be dispatched through a pre-incident plan.

Fogelman: What advice do you have for prevention?

Starnes: As a firefighter, I advocate for community risk reduction and promote fire prevention efforts.These efforts extinguish fires before they start through education, code enforcement and fire detection/suppression systems such as smoke detectors and fire sprinklers.

However, in the case of specialized high-risk occupancies, customized solutions are required. The use of thermal detection combined with smart suppression technologies such as your Fire Rover helps reduce losses to the business, reduce/prevent injuries to employees and protect the surrounding community and environment. Unlike traditional LDAR teams used in industry, these require large numbers of employees who are monitoring certain known potential leak points (thermal detection with automatic preset temperature alarms are more efficient), always on duty and consistently monitoring larger areas with one system.

Interested in learning more?  Andy will be my guest in Episode #6 of my webinar, “The Art & Science of Thermography for Early Fire Detection of Waste & Recycling Operations,” June 10 at noon ET. During the webinar, we will take a deep dive into early fire protection utilizing infrared/thermal technology in waste, recycling and scrap operations.

Ryan Fogelman, JD/MBA, is vice president of strategic partnerships for Fire Rover. He is focused on bringing innovative safety solutions to market, and two of his solutions have won the distinguished Edison Innovation Award for Industrial Safety and Consumer Products. He has been compiling and publishing the “The Reported Waste & Recycling Facility Fire in the US/CAN” since February 2016 and the “Waste & Recycling Facility Fire Annual Report.” Fogelman speaks regularly on the topic of the scope of fire problems facing the waste and recycling industries, detection solutions, proper fire planning and early-stage fire risk mitigation. Additionally, Fogelman is on the National Fire Protection Association’s Technical Committee for Hazard Materials. (See here)