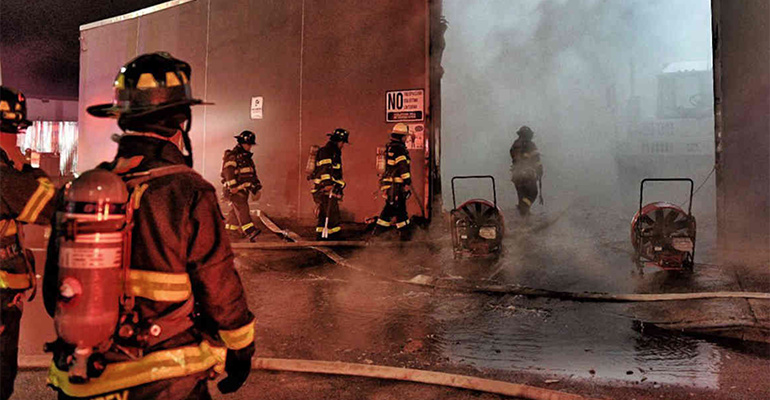 In July, there were eight more reported injuries to firefighters caused during three additional fire incidents.

During the past 12 months, the waste and recycling industry has experienced 326 reported facility fires in both the U.S. and Canada. Based on reasonable assumptions, we can extrapolate that 1,800-plus facility ﬁres have occurred during that time, which, based on the number of facilities reported by the Environmental Research & Education Foundation, is more than 40 percent of the industry. 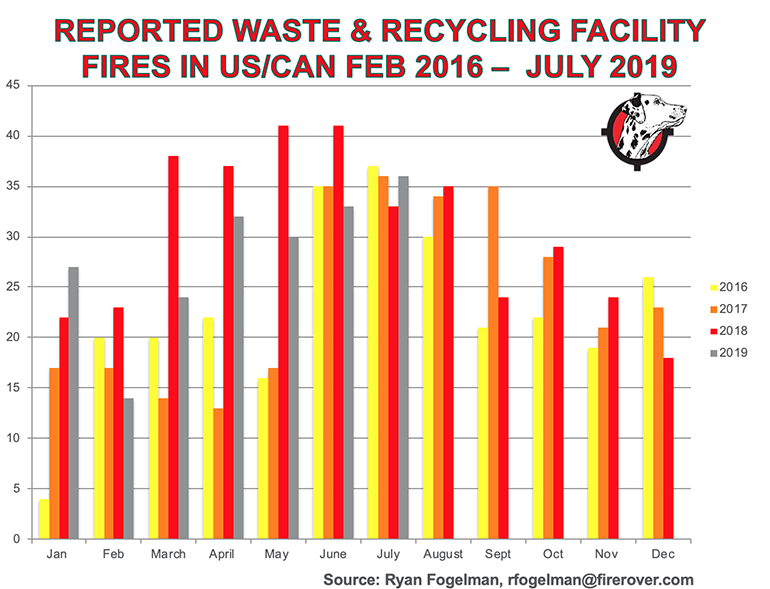 I define “reported facility fires” as any fire that has been reported by the media that occurs at a waste or recycling facility. Typically, those fires are the two-alarm fires that required fire professionals to arrive on scene.

When I first started working with Fire Rover, I was amazed to find out that fire incidents were down the list as a safety priority in the waste and recycling industry. This wasn’t due to a lack of caring, but as I met with industry consultants, executives, safety and operations folks, I began to understand that unlike truck accidents, landfill slides and compactor issues, fire wasn’t associated with the risk of losing a life. It is true that there have been very few deaths that have occurred in waste and recycling facilities due to fire. Fortunately, when there is a fire incident, the employees are typically able to evacuate. But unfortunately, the injuries that I see reported in the press around these fire incidents are more often than not the firefighters fighting these fires. 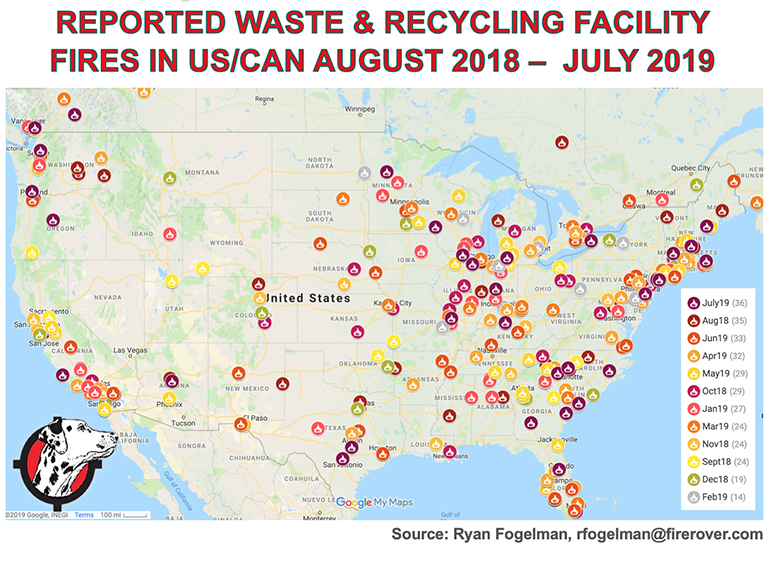 Over the past 12 months, there have been 30 injuries due to these fires, with a significant percentage of these injuries to the fire professionals. The scary thing is that 60 percent (18) of these injuries occurred during the past two months.

In addition, since I began consolidating waste and recycling facilities in February 2016, I have identified 53 injuries in 28 different incidents.

Since this data is only from media agencies, the question we must ask is whether these numbers are truly representative of the problem. Most of the articles I read report the initial event, the plumes of smoke that can be seen from miles and miles away or the fact that there was a fire at a facility, but in most, there is not a follow-up story that shares the results and any consequences.

Before we started to truly understand the hazards due to lithium-ion batteries, fires were considered a “black eye” for the company that endured them. A fire was considered a “failure” and fingers were pointed at the operations and safety personal of the organization to fix what went wrong. Fire codes were followed whether effective or not. And while traditional sprinkler systems can work, they are not ideal for the type of material and the shear amount of material we process on a daily basis.

In my early stages of research of industry fires, I published a serious of articles on LinkedIn called “The Anatomy Of …”  In these articles I would piece together snippets of reported information of a fire incident that gave the inside story highlighting the layers of waste and recycling fires, from initial detection through the full consequences. In similar fashion, I want to share some highlights from a couple of articles that provide insights to the fire professional’s perspective.

This article highlighted a scrap metal recycling facility fire that occurred in July published on MyStateLine.com. Heat from fires is nothing new for first responders, but when the weather adds to that, an already dangerous job comes with more risk … Wednesday morning, July 3, the heat index was in the upper 80s with the humidity rising as [city] fire crews battled a blaze. “Half the time, your adrenaline is pumping so much that you don’t even think about it because you have so many tasks to do,” said Rockford, Ill., Fire Department Firefighter Mike Beier in the report. “Try not to be a hero. Know your own limits, especially in this heat, because at the end of the day, we have to keep ourselves safe, as well as look out for our crew members.”

Regardless of the extreme temperatures, firefighters say saving lives trumps the heat they are feeling.

“There’s a lot going on, so we’re always trying to think steps ahead,” added Beier. “So, a lot of times we don’t even think about that heat, until it’s like ‘Whoa I am hot,’ and finally it will set in at some point, but you’re working so hard and doing so much that sometimes it doesn’t even set in.”

This is another eye-opening article posted in the Bronx Times that highlights the issue that our employees and fire professionals face.

A massive three-alarm fire ravished a recycling plant … Five out of the 138 responding Fire Department of New York (FDNY) members suffered non-life-threatening injuries while combatting the thick smoke and high flames. Three employees were inside the burning facility and were each evacuated safely by rescue workers—the smoke was thick to the point that anything past that expansive doorway was essentially too murky to see beyond for first responders. Drone footage showed FDNY members operating atop the facility’s roof, fighting through blinding smoke generated by the intense flames that was barreling from down below. The department also said that the smoke had become so intense at points during the operation that firefighters had to regroup and call for backup to put out the blaze.

I have learned so much since my early research on this subject. In my position at Fire Rover, I have a front row seat of fire incidents, their causes and the best way to avoid and fight them. What we typically see is that smoke from the fire fills up the affected building faster than their fire plan has expected. Check out this video that occurred on a materials recovery facility tipping floor.

The building fills with smoke within moments of the fire starting. Once the fire is at this stage, the idea that your employees are required to do any more than evacuate the building is not reasonable. I have heard numerous times of fire plans that required manual water cannons to be positioned toward the fire by an employee before they evacuate the scene. This might seem like a logical plan, but in the reality of a live fire incident, the smoke fills the structure so fast that the employee should evacuate to stay safe and wait for the fire professionals to arrive. Keep in mind the smoke fills warehouse structures that have 30- to 50-foot ceilings.

In this specific incident, we were able to fight the fire from a remote location and were unaffected by the smoke due to our thermal cameras. As we cool the flames and hot spots, the fire and smoke dissipate so that an evaluation can occur without putting anyone at risk of injuries. We continue our fire watch of the scene so that any hot spots or flare ups are dealt with as necessary.

If this incident was left to a traditional fire sprinkler to fight, the cleanup could have been days versus the results, which allowed the business to go back to work within hours of the incident. Even if the sprinklers worked correctly, the fire professional would have been responsible for final extinguishment, which is just another chance for a major fire to occur, putting fire professionals at risk of an injury.

The goal for us as an industry is to ensure that firefighters are not put in a position to make a Hobson’s choice of whether to fight a fire or not. Of our hundreds of fire incidents successfully detected and eliminated over the years, the firefighters who arrive on scene show up to a controlled scene where, at most, they add a water stream to ensure there are no hot spots or flare ups. Trust me when I say that no firefighter is upset they did not have to fight a waste or recycling facility fire and safely go home to their families after their shift.