Arwood Waste Inc., continues to grow as it always has &ndash; by embracing the slow and steady path that others often eschew.

Like many small haulers, John Arwood learned about the waste and recycling business at an early age and continued learning by doing it his own way.

Today Arwood Waste Inc. generates revenue of about $9 million with 40 to 60 employees. Based in Jacksonville, Fla., the company provides a wide range of waste and recycling services primarily in the Florida and Georgia area, including collection, demolition, recycling and hazardous waste. Arwood Waste’s CEO also operates a separate national brokerage company called Together Waste Inc. 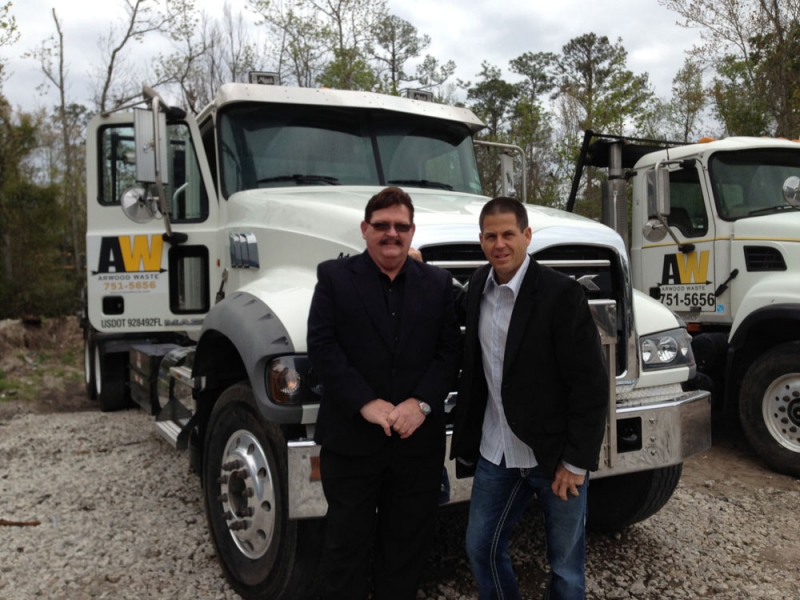 Arwood’s father, John Arwood Sr., is a full-blooded Cherokee Indian who worked at Bethlehem Steel in Jacksonville. When the younger Arwood was seven or eight years old the company let him sweep up for extra money. He started pulling excess stainless steel welding rods and selling them. “I was making more money than my dad at seven years old,” Arwood says.

He then began helping Bethlehem with roofing work and started hauling the roofing material. That led to a Dumpster account separating and hauling scrap metal. By high school Arwood added a roll-off. After school his dad quit work and joined his son in his growing business.

Arwood worked to grow that business however he could. He found loopholes in contracts companies had with businesses to take their cardboard for recycling and not interfere with the main contract. “I’ve always pushed recycling,” he says.

Arwood Waste grew into a full-service waste and recycling company serving Jacksonville, St. Augustine, Palm Coast and Gainesville in Florida, and St. Marys and Brunswick in Georgia, as well as smaller cities. The military is a big market for the company.

John Arwood took another unusual tack to building his business. He developed a separate national Internet brokering business, called Together Waste. He established websites under different names such as 123dumpsterrental.com and dumpstershop.com, and if any potential customer searches for a Dumpster rental, it comes up on the first page of Google. Arwood brokers the business, putting the customer in contact with a local hauler for the commercial or residential job, usually construction, to supply roll-off containers and service.

“We’re doing it differently,” Arwood says. “We’re going after a front load at a jiffy (convenience) store or somebody that has two or three places. I don’t want Walgreens with 10,000 stores, and you’d lose it in a year.” 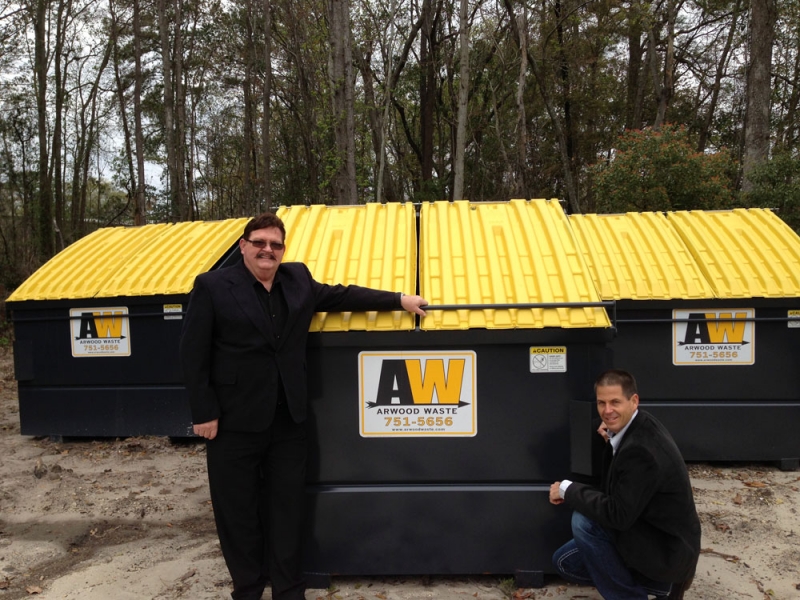 The sites did so well that an opportunity opened for Arwood to sell advertising space to the small hauler subcontractors. “They’re guaranteed the work because they advertise with me.”

He now has some 3,000 front-load collection accounts. And it’s increased Arwood’s national profile. “Everyone knows me in the industry because I’ve talked to them on the phone,” he says. “Larger companies are interested how I got this work. I’ve gone from welding rods to now I’m competing with largest companies in the nation.”

Another distinctive trait about Arwood Waste is that it is, as far as Arwood has been able to determine, the only full-service Native American-owned waste company in the United States. It’s a point Arwood is proud of and lets people know, but he didn’t communicate that at first. As he struggled to get recognized by the government for potential waste contracts as a minority, “it made me realize that the American Indian reused the land and everything,” he says. “When they killed an animal they’d use the hide for a tent, clothes. Whatever they did, they reused. They’re like the godfathers of reusing. “I’m trying to keep that going, to reuse as much as I can, because it’s my belief.”

To achieve disadvantaged business enterprise (DBE) status with government contracts minorities have to be approved by the government. Arwood worked through a process that he described as sad. “The American Indian is the minority of the minorities,” he says. “If you’re black, you’re black. For an American Indian it’s the most red tape to get approved. It’s a real struggle to get the status to use to bid.”

Arwood knew a black entrepreneur who got registered with the government for DBE status in 120 days. It took Arwood almost a year, as the government wanted extensive documentation, such as birth certificates from ancestors.

(Arwood asked to emphasize that the above was just an example and could pertain to any minority.)

But once Arwood got DBE status it has helped his business significantly in winning government business, primarily larger demolition jobs, because his particular minority is scarcer and more quickly fills a quota for that group.

Don’t Give Him Credit

Arwood thinks big with his company, but he’s old school regarding debt. “Everything is bought and paid for,” he says. “It’s just the way I was raised. I just don’t want to be owing anybody. It’s like the thinking goes, if you can’t afford to buy you don’t need it.”

Every big hauler has approached him to sell his company, he says. He listens, but getting swallowed by a bigger fish likely isn’t in the cards. Because of the way his equipment is depreciated, all the proceeds of a sale would go to capital gains taxes.

“I’m not a business major; I didn’t know all that when I started. Maybe it would have made more sense to do it that way. But I’ll probably never sell because the government would take all the money.”

He also has increased business the old fashioned way, making two small acquisitions that have worked out well, and winning contracts. “Someone told me you’ll never make it in the business; you can’t start from the ground up. It became a challenge for me.”

Waste Pro’s Cinelli says he’s worked with Arwood as a subcontractor and used his brokerage company occasionally. “He runs a very efficient operation,” he says. “He’s got a great demolition business.”

And he has high regard for him as a businessman personally. “He’s a man of his word. When he says he’s going to do something he does it. Sometimes that’s hard to find nowadays.” As a third-generation hauler himself, Cinelli has been around long enough “to know the guys who have and the guys who don’t. He definitely has it.”

Cinelli believes the Jacksonville/Duval County market in which he and Arwood compete in a fairly even playing field. “For an independent or small guy this is a good market.” 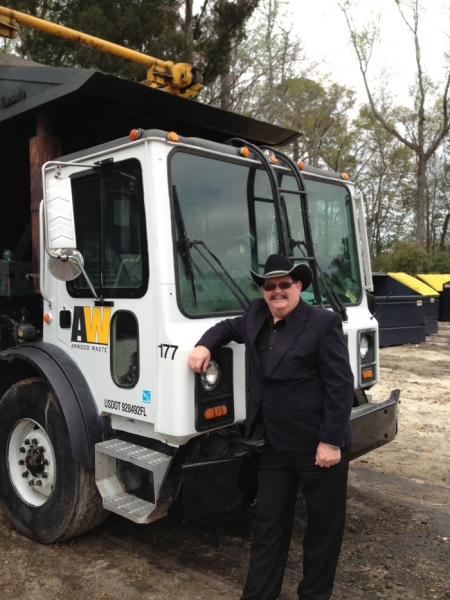 But on that last point Arwood doesn’t fully agree, particularly with Advanced Disposal Services Inc., which is based in the area. “I believe the market in Jacksonville is the slowest in the country to come back from economic downturn, and the most competitive area in America.”

Arwood has learned how to challenge the bigger companies on bids. “Every time I break one of these franchises they allow me to compete, and it opens door for everybody,” he says. “If there’s only one garbage company it would be ten times more costly because they could get away with it.”

He cites the challenges with the big companies owning the landfills as well. He gave the example of Advanced Disposal buying a second construction and demolition (C&D) landfill in the area, and the tipping fee eventually doubled, with discounts for volumes that Arwood couldn’t generate.

How does a smaller hauler compete? Arwood Waste offers niche services, like cleanup for homebuilders, promoting environmentally friendly recycling and collection, or analyzing a generator’s waste and showing them how it can be reduced – which can also lead to some valuable recyclables for Arwood Waste.

The company’s model has been to establish a sufficient business base in an area – about $1 million in revenue – and open a facility. Currently, Savannah, Ga., is Arwood Waste’s next region with enough business to set up shop.

“It takes a lot longer to do it that way but we don’t have to spend millions of dollars to buy companies just to be in that area,” Arwood says.
Phoenix is the next target market – distant from the east coast, but viable because the company’s brokering business has provided some regular customers, plus the military.

“I’d like to be the next Waste Management, “ Arwood says. “But with a whole different model.”