New Orleans: After the Flood

The Big Easy continues to clean up after Katrina and Isaac, while&nbsp; rebuilding essential operations like recycling. It&rsquo;s getting easier.

Welcome to New Orleans, site of WasteExpo 2013, a city you may know by one of it’s plentiful nicknames, including Nawlins, NOLA, the Birthplace of Jazz, the Crescent City, the City that Care Forgot, Mardi Gras City and, of course, The Big Easy.

If you are reading this onsite at WasteExpo, you should know that you are one of nine million annual visitors to New Orleans and part of a gargantuan trash-making machine.

Visitors come for one of the dozens of events and festivals listed on the city’s social calendar or one of the countless events not listed — including trade events like WasteExpo.

Over the course of a year, then, nine million people — two million more than live in New York City — visit the city and add their trash and recycling contributions to those of the city’s 369,000 full-time residents.

How much more trash do 9 million visitors add to a city the size of New Orleans? New Orleans disposes of about 173,000 tons of trash per year, including 5,000 tons from government agencies and 167,000 tons of residential trash.

By comparison, Atlanta, home to a population 432,000 in 2010, not to mention its own healthy tourism and convention trade, disposed of a mere 100,000 tons of waste in that year.

In short, New Orleans disposes of nearly twice as much trash as the larger city of Atlanta. 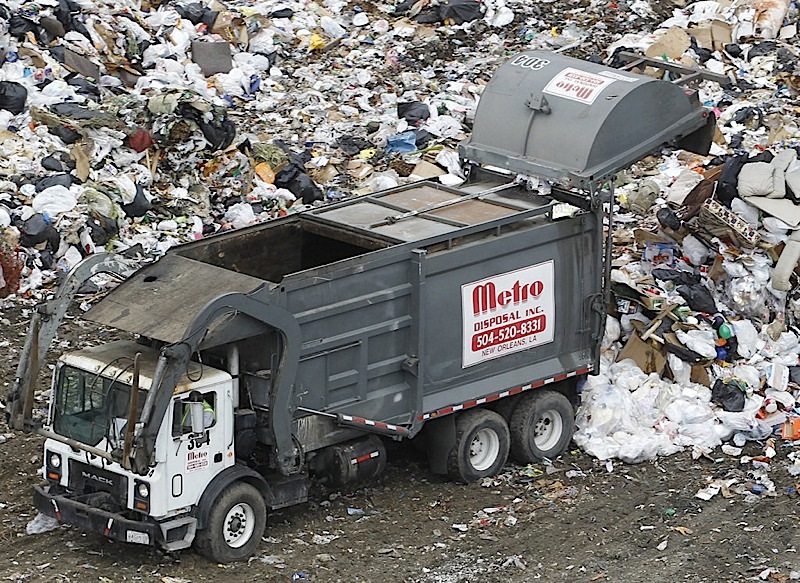 Interstate 10 runs east to west through New Orleans, more or less dividing it in half. “We service residents north of I-10,” says Glenn Woods, president and co-owner of Metro Disposal Inc. “This area was hit hardest by Hurricane Katrina and most of the repopulation is occurring there.”

Outside of the French Quarter and the Downtown Development District (DDD), trash is collected twice a week, according to Cynthia M. Sylvain-Lear, acting director for New Orleans’ Department of Sanitation.

The commercial areas in the French Quarter and DDD receive twice-a-day collection service. This area receives other enhanced services as well. “We sweep the streets and flush the streets every day,” says Sylvain-Lear. “We also pressure wash the sidewalks in the French Quarter at least one day every week. The sidewalks that receive the heaviest use get three pressure washes per week.”

Unsurprisingly, the reason for the extra service in the French Quarter and DDD is the heavy tourist traffic.

The city also pays the contractors for curbside commercial collection in buildings with four units or less. Larger commercial customers arrange for their own services, often contracting with city-based service providers. “We service casinos, hotels, and large condo and apartment complexes,” says Woods.

New Orleans hosts dozens of special events over the course of a year. The week before WasteExpo, for instance, the Bayou Boogaloo came to the shores of Bayou St. John in Crescent City.

Sharing the week with WasteExpo, from May 22 through 25, is the New Orleans Wine and Food Experience. Inaugurated in 1992, the event, labeled a “Perennial ‘Top Ten’ Wine and Food Festival” by Wine Enthusiast magazine, the festival draws thousands of wine and food lovers to the great French Quarter restaurants. If you’re reading this at WasteExpo, you might consider joining them.

The week after WasteExpo comes Greek Fest, which the city traditionally celebrates on Memorial Day Weekend.

All of these events bring spikes in waste generation. But the granddaddy of them all, of course, is Mardi Gras. This year’s Mardi Gras parades ran from January 26 through February 11. Immediately following one of these parades, says Sylvain-Lear, you literally cannot see the streets or the sidewalk along the parade route so layered are they with beads, trash and other revelry refuse. Two or three hours later, you can. Everything has been picked up and carted away. 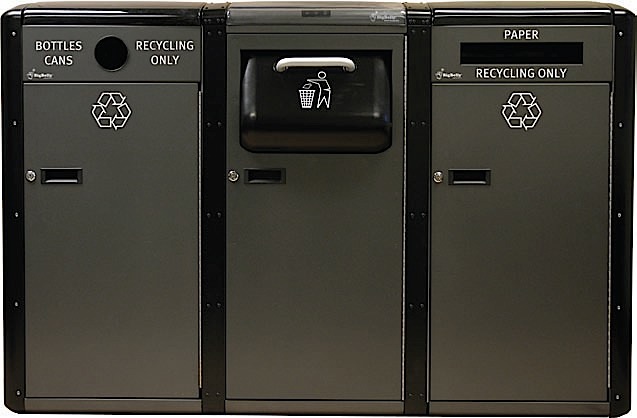 “There are people on the streets until all hours,” says Sylvain-Lear. “We do our best to clean up in a timely manner. We aim for two hours.”

While Mardi Gras is the biggest and messiest event of the year, it is but one of 102 festivals and events scheduled in New Orleans this year. More than 50 of those last two days or longer.

There are few days during the year when the city doesn’t have to pick up litter cans and supervise a general street cleanup by contractors.

In fact, the volume of trash is so staggering that the city is pilot testing new trash receptacle technology: trash cans equipped with solar-powered compactors. “We’re testing two units in the French Quarter,” Sylvain-Lear says. “We’ve found that they cut the collection requirement from 14 times per week to 3.5 times per week.”

Throw Me Something (Away), Mister! 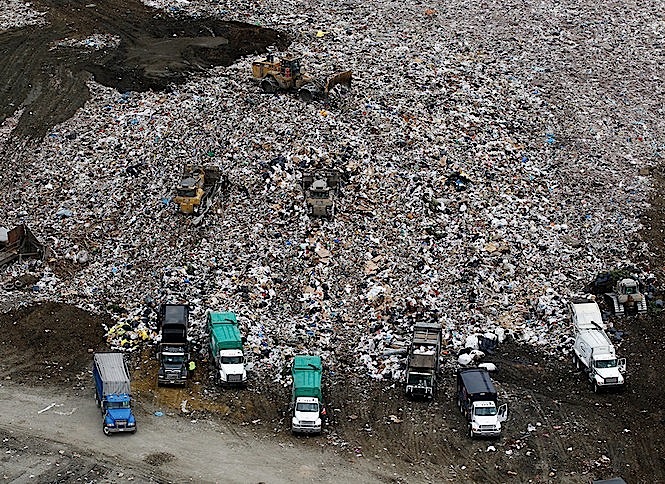 “We dispose of all of our trash at River Birch, which is about 20 miles from New Orleans in Avondale,” says Sylvain-Lear. The tipping fee is $30.49 per ton.

“We take our vegetative debris to Gentilly, which charges $3 per cubic yard. That’s a discounted rate for the city. The regular tipping fee is $4.”

One of the problems created by Katrina and other hurricanes, such as last year’s Isaac, is illegal dumping.

It has become such a serious issue in the city that in response, the city has mounted an outreach campaign that encourages citizens to report illegal dumping. Department of Sanitation employees keep an eye out when dumping litter cans. “We remove lots of illegally dumped materials from public right of ways,” says Sylvain-Lear.

In addition, two quality-of-life officers work out of each of eight police precincts. Their responsibilities include enforcing codes related to littering and dumping.

Since Katrina, the Department of Sanitation has discovered that public communications about the kinds of materials emergency contractors will collect helps to curb illegal dumping.  If members of the public understand that the materials will be collected, they will be less inclined to find an illegal site.

It’s also important to provide information about sorting the debris. “The better segregated the materials, the easier and faster it is to pick up,” Sylvain-Lear says.

In addition, the city has designated several temporary debris staging sites around the city. The state Department of Quality (LEQ) inspects and approves these sites annually. When a hurricane strikes, the city activates temporary sites closest to the debris fields. The temporary sites enable contractors to clear the neighborhoods without time-consuming trips to the landfill.

Before removing the debris from the temporary sites, LEQ requires that contractors reduce the volume of vegetative debris by 50 percent through chipping and grinding.

“Although we have seen a tremendous amount of rebuilding, we still have a significant number of vacant lots and abandoned housing,” says Kambium E. Buchner, a spokesperson for the Department of Sanitation. “As the New Orleans Redevelopment Authority and private interests continue to place properties into commerce, the number of blighted properties decreases along with the volume of illegal dumping. We have not solved the problem; however, we are gaining ground.”

The Late Return Of Recycling

The city’s recycling tonnage is low because recycling was slow to recover after Hurricane Katrina. Suspended in 2005 in the wake of the hurricane, curbside recycling service did not restart until May of 2011, and that was only in part of the city. Service remains unavailable in the DDD or the French Quarter.

Slowly but surely, New Orleans is rebuilding its recycling capabilities. The city operates a drop-off site that accepts and separates fiber, plastics, metals and electronics. The site operates on the second Saturday of every month. Last year, it collected 80 tons of material.

There is also an annual drop-off event for household hazardous waste. It averages six tons per year.

“We have several partners that handle some of the recycling,” says Sylvain-Lear.

SP Recycling Southeast LLC, with offices throughout the southeastern U.S., buys the fiber from the recycling drop-off facility. “They provide us with a 30-yd. roll-off for the cardboard and other fiber products,” Sylvain-Lear says.

Boston-based Iron Mountain Inc. maintains offices in New Orleans and attends three of the monthly drop-off events. The company provides secure shredding services. Individuals can bring up to 50 pounds of paper to the event, and Iron Mountain will shred it free of charge.

The Green Project, a local New Orleans non-profit, takes paint that comes into the hazardous waste drop-off. “The Green Project has a store and sells the paint, and FCC Environmental takes our oil,” says Sylvain-Lear.

Headquartered in Houston, FCC Environmental is an environmental services company with offices in cities across the United States, including New Orleans.

New Orleans is also making plans to get back to where it was before Katrina. The 2013 budget contains a line item that will fund a feasibility study for the construction of a recycling facility. “We want to find out if this will reduce our costs and perhaps generate revenue,” says Sylvain-Lear.

Finally, Katrina devastated the city’s transfer station. Repairs have stretched on for years. But the facility is finally scheduled to come back on line this year.

That will be a major milestone in New Orleans’ long, difficult trek back.

The New Orleans Department of Sanitation operates with a small staff. “We have three people, including me, in the office,” says the department’s acting director, Cynthia M. Sylvain-Lear. “There are three supervisors and 50 people in the field -- equipment operators and laborers.”

Sylvain-Lear keeps an eye on operations by studying reports from haulers and landfills. I track the number of loads per driver,” she says. “If they are all working the same kinds of route and one makes four trips the landfill and another makes three trips, I want to know why. Are the workloads properly allocated? Are we as productive as possible and using the least fuel?"