Unprecedented Interest in the Supply Chain and a Year of Shortages 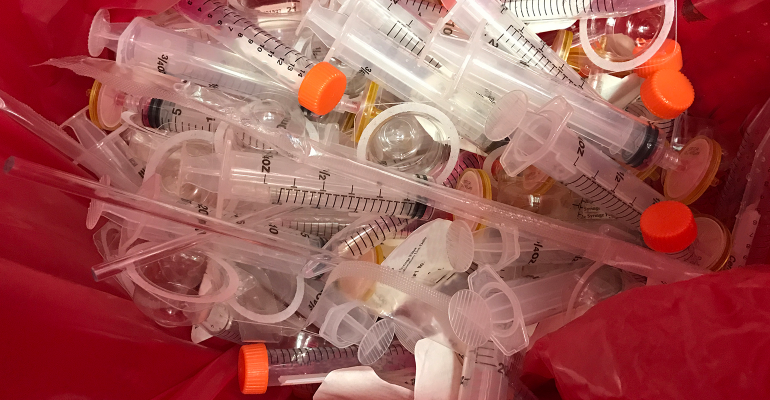 In the past, if you brought up the term supply chain at a party, people would probably start looking for a graceful exit to the conversation. How do I know this? Because I read 90 Percent of Everything by Rose George, a book about shipping, and had to chase my audience as they walked away from me when I shared nuggets from the book. I also read The Box by Marc Levinson about the development of the shipping container…

Of course, we don’t go to parties anymore. However, collectively we are more tuned in to supply chain issues over the past year than ever before. From PPE (which we no longer have to spell out because now everyone knows what it means) to toilet paper shortages to flour and yeast, to outdoor heaters and home office equipment.

There’s more. Did you know there was a shortage of gym equipment? With all the gyms closed, people wanted to work out from home. Hair clipper shortage? People wanted to cut their hair at home – although from some of my zoom calls, I think a lot of people used the pandemic as an excuse not to cut their hair. Even coins! People didn’t want to handle money during the pandemic. Some banks limited the number of quarters they would sell even those that desperately needed to go to the laundromat. These shortages were mainly due to the pandemic.

Christmas trees! Apparently, this was largely related to the last financial crisis in 2008 where many Christmas tree farms went out of business resulting in fewer trees planted. The trees take about twelve years to grow setting the stage for our 2020 shortage. But apparently, people were more interested in Christmas trees than ever before because we were all stuck at home --- so partly pandemic driven.

Now that the pandemic is nearing its end, is it all better now? Unfortunately, it doesn’t look like it. When the Ever Given got stuck in the Suez canal for nearly a week blocking shipping traffic estimated at $3 billion per day between Europe and Asia, it caused ripples in the flow of goods that are anticipated to last for weeks, if not months. Given that the “90 percent” in the title of George’s book refers to amount of goods that are transported by ship, it is no surprise that blocking a major shipping channel would cause a few problems.

Besides all the delayed shipments, there is a less well-known shortage in shipping – that is, a container shortage. Ocean carriers rushing back to Asia to fulfill U.S. import demands were often leaving U.S. ports with empty containers abandoning U.S. exporters and sticking them with demurrage charges and lost business. This caused the U.S. Federal Maritime Commission to send a letter to the World Shipping Council in December 2020 after receiving numerous complaints about it.

All these shortages and delays reminds me of a parable Milton Friedman once presented demonstrating complexity through a simple pencil. He said that not a single person could make a pencil from scratch. To do it, they would need to harvest the wood, collect rubber for the eraser, mine metal for the ferrule and do whatever is necessary to make the yellow paint. And that doesn’t even cover the graphite. The internet made it seem as if suddenly all materials were easily and readily accessible. But the inner workings of supply chain have largely been opaque.

From the medical waste side of the fence ---

Supply chain issues have resulted in a shortage of sharps disposal containers. This might seem likely given that there is a major vaccine rollout going on right now that requires more sharps disposal containers than ever before, not just in the U.S. but worldwide. However, surprisingly, the vaccine rollout is not the primary cause of the shortage.

Fear of a massive shortage in disposable, polypropylene sharps containers blossomed in January after a major manufacturer notified its customers of limited availability of polypropylene resin. This was due to a December 2020 fire at a polypropylene resin manufacturing facility. Not the best news at the beginning of the single largest vaccine campaign in U.S. history.

Sharps containers are FDA approved medical devices. So NWRA’s Healthcare Waste Institute members met with officials from Occupational Safety and Health Administration (OSHA) and Food and Drug Administration (FDA) in early February to discuss potential mitigation measures. However, because reusable sharps containers which are made of a different resin were not impacted, hopes were high that the sharps container shortage could be weathered without significant consequence. The February freeze that caused massive blackouts in Texas changed that outlook. The freeze shut down the entire petrochemical-producing region blacking out about 80 to 85 percent of the country’s polyethylene and polypropylene production.

As a result, CDC and OSHA have released a document on Strategies for Sharps Disposal Container Use During Supply Shortages to address the potential shortfall. While declaring that FDA-cleared containers should be used whenever possible, the federal agencies recognize the possibility that healthcare facilities might not be able to secure them. They mandate that any alternative containers used at vaccination sites still meet OSHA Bloodborne Pathogens standard requirements. Among other items, alternative sharps disposal containers could include laundry detergent, windshield wiper fluid, cat litter, or bleach containers. The alternative containers must be leakproof and made of heavy-duty, puncture-resistant plastic or metal with a tight-fitting, puncture-resistant lid. In addition, they should include biohazard warning label.

And just that easily, the sharps container shortage has been solved. So if a pencil is not be able to made, substitutions for temporary shortages can be found --- like pens!

On the flip side, shortages are good news for recycling commodities. The concentration of a significant portion of the petro-chemical industry in a small geographic area may have some advantages, but the Texas freeze showed how vulnerable the industry is as well. Conversely, the lack of centralization has always been a challenge for recycling as it requires reverse logistics. This means working against the law of entropy, trying to create order out of disorder and randomness. The advantage is that no single event will wipe us out, not even COVID.

Demand for fiber shot up at the beginning of the pandemic and along with that prices, reminding us of the value of our materials, not just in the circular economy, but in the global supply chain. High-density polyethylene (HDPE) and polypropylene started rising shortly afterwards and metals were inching up by the fall. Then, the plastic shortage got worse.

The same Texas freeze that caused heartburn for the healthcare waste sector spelled relief for the recycling sector. Less availability of virgin plastic means that existing demand for the remaining plastic is higher, included recyclables. This was reflected in increased pricing. Over the past few months, plastics have seen significant price increases. Natural HDPE continues to reach new all-time highs. It is more than double where it was a year ago and more than double where it has been historically. Similarly, color HDPE is also up, more than triple last year’s price. However, it has not reached its peak from 7-8 years ago. Polypropylene is five times what it was selling last year. All this bodes well for recycling.

Polyethylene terephthalate (PET) is a different story, having experienced low demand over the past year. And even though PET beverage bottles have gone up over the last few months pulling out of a 10-year low, these increases just brought the value of PET up to where it was last year. This, despite numerous brand commitments. In fact, as late as the end of 2020, recyclers struggled to move many of the PET bales.

The uptick in prices has been good news for recyclers, but the experience with PET bottles reinforces the need to bolster demand. Last year, California enacted AB793 which requires plastic beverage containers to have a minimum of 15 percent recycled content by next year, 25 percent by 2025 and 50 percent by 2030. Already, this has created a stronger market for PET in California than in the rest of the country.

Many brands have made voluntary commitments to use 25 percent recycled content by 2025. Yet, the progress to date has been limited. Ellen MacArthur Foundation’s annual Global Commitment Progress Report shows commitments by Pepsi and Coca-Cola to use 25 percent post-consumer recycled content (PCR). However, Coke used only 9.7 percent PCR in 2019, up from 9 percent in 2018 and Pepsi used 4 percent PCR up from 3 percent from 2018.

Without demand, material will not be collected and processed. Without buyers, material has nowhere to go. But even if the demand is there, the supply cannot be developed immediately. It requires infrastructure. The material is not going to appear overnight. Demand for PCR should be increased now to establish a glide path for brands to meet their 2025 commitments.

Finally, if you’re trying to buy carts or trucks, be patient! Demand for carts was already up in some areas as residential service requests increased. For instance, the City of Yakima, Washington normally orders two loads of carts per year. By the end of September, they had already placed a third order, but were told that pandemic-related production issues would delay cart deliveries. Combined with the current plastics shortage, carts might be in short supply for a while.

Truck manufacturers too have been challenged by increased orders and by a number of shortages. The current, ongoing, worldwide semiconductor shortage has affected motor vehicle industry as much as it has affected the electronics industry.

Only time will tell whether most of the shortages get resolved once we go back to “normal.” But, here’s something – if you live on the east coast, it’s time for Brood X to come back, our 17 year cicadas. We certainly won’t have a shortage of cicadas this summer.