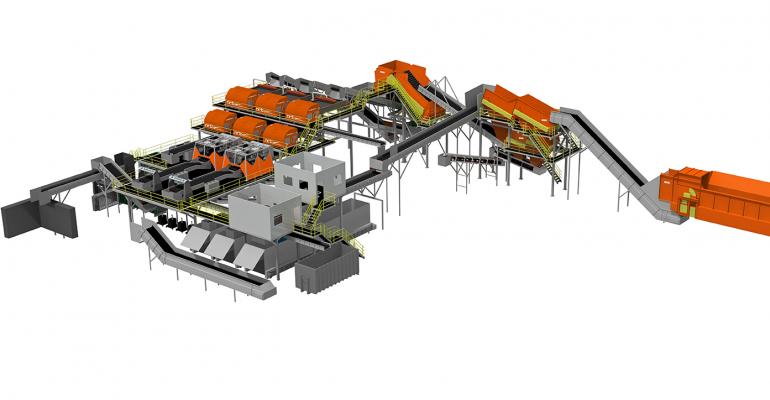 Operational in Q1 2019, the system will process 20 tonnes per hour (tph) and run three shifts to process approximately 120,000 tonnes annually. Noteworthy to this process is the inclusion of Max-AI VIS (visual identification system) units to monitor the quality of outbound paper.

The process begins with a BHS metering bin, OCC separator and debris roll screen to feed the system, recover cardboard and remove fines. A BHS NewSorter separates news and pams from smaller fiber and contamination. The news and pams are split into two material streams for purification, a process that begins with two NRT SpydIR-R optical sorters to remove and recover plastic film. The news and pams are then treated by two NRT ColorPlus optical sorters to remove and recover any remaining cardboard. Final paper purity is achieved autonomously by Max-AI AQC-2 robotic sorters. NG will also recover aseptic containers and remove contamination from mixed paper with two NRT SpydIR-R units.

NG noted it will be able to analyze product quality in real time with its two Max-AI VIS units and the Total Intelligence Platform.

“We are extremely pleased to have signed with BHS for a new paper line for our production facilities in Oslo, Norway,” said Frode Karlsen, Norsk Gjenvinning’s head of the Oslo-region, in a statement. “The level of automation and technology is astounding and will help us achieve new levels of throughput and quality. We are very eager to receive the equipment and start production as soon as we can next year.”

NG receives unsorted paper and cardboard from both residential and commercial customers from southern Norway. The pure, outbound material will be used to create new paper and cardboard. NG handles approximately 25 percent of Norway’s waste as well as waste from Sweden, Denmark and the U.K. The company recycles 85 percent of all waste collected and supplies secondary materials and fuel to customers in Norway, Europe and Asia.