Nashville's New Tune is a Riff on Recycling

<p> ARE YOU READY TO RECYCLE?: T-Rac, mascot for the NFL&rsquo;s Tennessee Titans, poses with a Curby recycling truck at the Nashville Mayor&rsquo;s First Day of School Festival.</p>
The Music City aims to take recycling to a crescendo.

Nashville toots its horn as the “Music City,” but lately it’s been tightening up its recycling routine, trying to earn a reputation as a big-time green capital.

“Our mayor has made a commitment for Nashville to become the most sustainable city in the Southeast,” says Veronica Frazier, director of the Nashville Metro Beautification and Environment Commission. “We are doing everything we can to support that vision.”

When Metro Public Works Director Billy Lynch moved into his position in 2002, Nashville was doing very little recycling, and the economy was struggling. The Public Works Department saw cutbacks of $26 million and a reduction of 200 employees during that time. “We had to find out how to be efficient and provide resources the taxpayers expect us to provide,” he says.

Going green was a big undertaking. The region’s solid waste code hadn’t seen significant updates since it was developed in the early 1960s. But major revision came in August 2010, as Nashville’s Metropolitan Council created a five-year plan to reduce waste and increase recycling.

“It laid out kind of what we want to achieve over the next five years or more,” Lynch says.

Changes began immediately, with the requirement that all leaves and grass clippings be placed in biodegradable paper bags for collection. In November 2010, fees increased at Nashville’s convenience centers and mulch facility. As of July 1, 2011, Metro required residents to place their yard waste at the curb, as all yard waste was banned from solid waste collection. Residents have several options for yard waste recycling. They can contract with a private hauler, have the material collected by Public Works or drop it at one of two sites in the city at no cost.

The metropolitan government’s department of public works will begin charging residents and businesses a collection and disposal fee for using more than two trash carts starting on July 1, 2012. But the department will provide customers with additional recycling carts and monthly recycling collection at no cost. 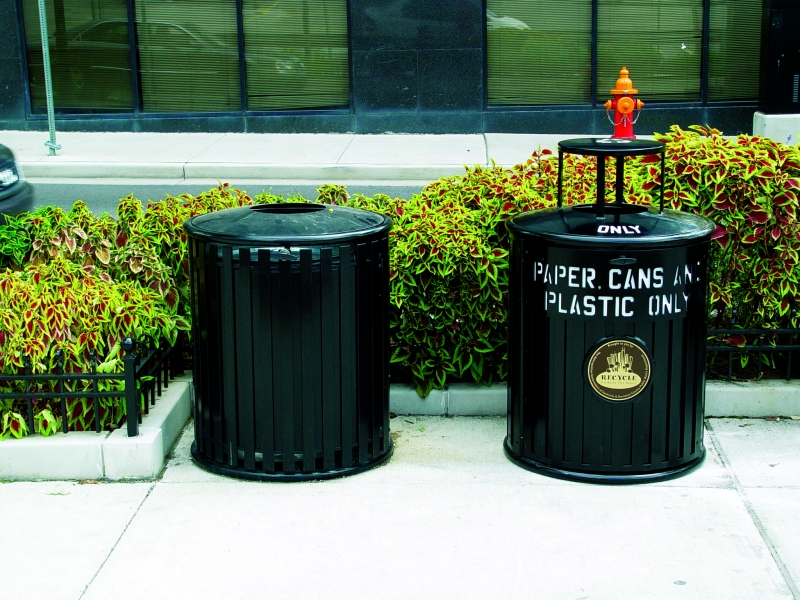 The next phase, which begins on July 1, 2013, will see private haulers implementing a pay-as-you-throw system, with a recycling option available to all customers in Nashville and Davidson County. The contractor has yet to be approved by the metro government. Also in July 2013, the metro government will ban cardboard from county waste collection, directing it to be recycled instead.

On July 1, 2014, the Public Works Department will further tighten the noose on waste as it begins charging customers a fee for using more than one trash cart. Again, the department will provide monthly recycling collection and additional recycling carts at no additional cost.

Finally, by July 1, 2015, the government will ban electronic waste collection within Davidson County. Residents will be able to recycle e-waste at Metro’s household hazardous waste facility, while businesses will be required to recycle their e-waste with a private recycler.

Lynch feels good about how the changes have been accepted so far, and believes it’s helpful that the moves will be phased in over the next five years. “It’s going to be a little difficult adjustment [for people],” he says.

Metro Nashville is divided into two tax districts. The Urban Service District, which includes the Nashville metropolitan area and pays a higher tax rate, has had curbside recycling since 2002.

The remainder of the county is the General Service District. In recent years, the Public Works Department has looked for ways to offer more recycling services in this area. The government established 13 recycling drop-off sites throughout the county and opened three recycling convenience centers, which take a greater variety of materials than the drop-off locations. In 2009, the government launched a pilot program for curbside recycling pickup for the General Service District. Lynch says the program currently has a 69 percent participation rate.

Metro now provides weekly curbside waste collection and monthly recycling collection to the Urban Service District, with brush collections three times a year for most of the county (satellite cities are excluded). 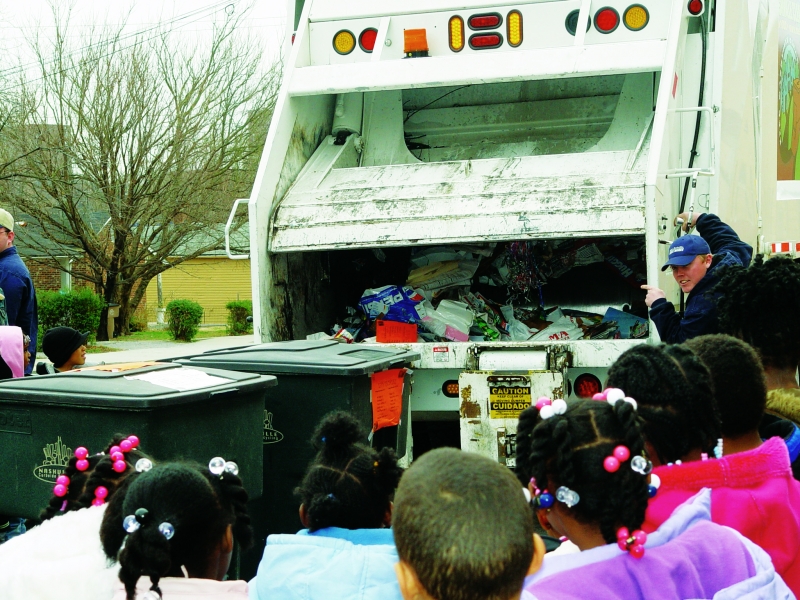 Educating residents about diversion is important to the county. “We teach classes on composting and recycling and work with the schools,” Lynch says.

The government also works with the contracted hauler and school janitorial staff on the separation of waste and recycling. Schools often sponsor recycling drop-off sites on school property, and in those cases they receive revenue.

Frazier says the highly visible school programs demonstrate to residents that “people aren’t secretly throwing [recyclables] in landfills. They are actually getting recycled.”

Metro Nashville also is advocating recycling through neighborhood groups. In particular, the government is targeting what it terms “fragile” areas — lower income neighborhoods where the community might not feel quite as invested in sustainability initiatives.

“We’ve been quite active to take giant steps forward,” Lynch says. While the progress has been steady over the past nine years, the revision of the waste code accelerated things. “That laid the groundwork for expanding a lot quicker,” he says.

Still, Lynch is frustrated that the area hasn’t been able to add two more recycling convenience centers. “We have the sites selected, but either the funding, the staffing or the buy-in from the area has not been there,” he says.

Frazier acknowledges that budget constraints challenge the department. “We don’t have a billion-dollar advertising budget,” she says. “We utilize every resource we can.”

One successful program, in cooperation with the Coca Cola Co. and Kroger Co., encourages customers to put stickers (mailed out by Coke), on their recycling carts for a chance to win one of 10 $50 Kroger gift certificates awarded each week. Collection workers note which residents have set out carts with stickers and enter them into the drawing. “We look for everything we can to raise our recycling rate and awareness,” says Frazier.

Does Metro Nashville have enough resources to meet its recycling goals?

“With what’s available today, I’m comfortable we can do it,” Lynch says. “I worry about two to four years from now. We can’t continue to follow this path.”

Metro views money as key to reaching its recycling goals.

“Economics has been just as much a motivator and catalyst for increasing and promoting recycling as our mental stewardship and concern,” Frazier says. “We believe that those two should go hand in hand.”

She discounts the idea that tourist traffic or other variables particular to Nashville present insurmountable recycling challenges. “Those are behaviors that are learned,” says Frazier. “If you didn’t recycle as a child, you’d have to learn it as an adult. It’s just continuing education.”

For instance, organizers of the weeklong Country Music Awards did “a tremendous job,” recycling a significant amount, she says, noting the pedestrian waste achievements in a popular tourist venue like Nashville.

Even when Nashville faced other challenges, such as a bad flood in May 2010, “not one house that wasn’t flooded missed their recycling program and trash pickup,” Lynch boasts. “It shows the commitment this department and staff have to make this work.” 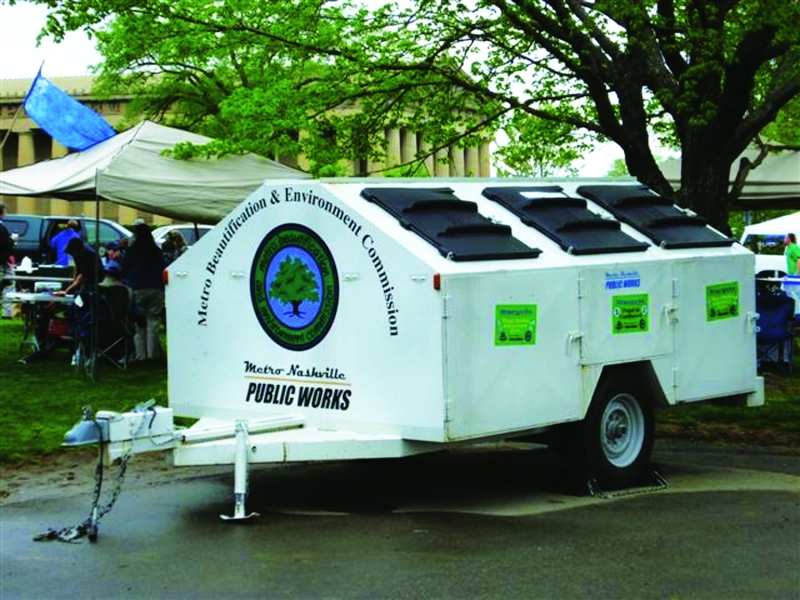 On the other hand, the Public Works Department believes money remains a more universal driver of recycling. Cities considered “progressive” are likely to have high landfill fees that help justify high recycling rates. Nashville area landfill tipping fees are currently $32 per ton, and recycling is generating $25 per ton in revenue.

“Governments are facing tough times,” Lynch adds. “We have to identify ways to be more efficient, to expand services that people demand.”

Two materials that meet that criteria are brush collection and grass cuttings. Smith says Metro’s recycling efforts have been a catalyst to other programs, such as backyard composting. Metro sells 450 composting containers per year. “More and more people are buying them, even though we haven’t promoted the program,” says Smith.

Lynch says his department spends a lot of time trying to educate the public on the benefits of recycling and changing their disposal habits.

“It’s a slow process, but if people are sincere [about doing] things more efficient[ly], then recycling is one component that we need to urge everyone to [adopt],” Lynch says. “We need 100 percent participation. That’s why we spend a lot of time with younger people: to change habits.”

Frazier hopes that 20 years from now people will be forced to ask, “Where can I find a trash can?”

“The real issue starts in your kitchen, your trash can,” he says. “When you control your own waste stream, what you do is very important to your city.”

National statistics suggest that almost 90 percent of Americans improperly dispose of outdated or unwanted prescription and over-the-counter (OTC) drugs. Many simply don’t know that throwing them away with household garbage or flushing them down the toilet or kitchen sink is no longer the preferred way to get rid of them.

Nashville Metro and Tennessee officials consequently launched the state’s first comprehensive, county-wide medication take-back initiative to educate residents about how to properly dispose of prescription and OTC medications — and provide a convenient location to do so. The Metro Nashville Pharmaceutical Collection Program also ensures the city’s water supply is protected, while helping to reduce the risk of prescription drug overdose and abuse.

The Tennessee Department of Environment and Conservation (TDEC), the Metro Police Department and the Metro Public Works Department have partnered for several years to sponsor public events where Metro Nashville residents could properly dispose of prescription and OTC medications. Growing interest in these events initiated discussions on how a permanent collection program could be organized.

With shared funding from TDEC, Public Works and Metro Water Services, 10 collection containers were purchased and wrapped with educational messages regarding pharmaceutical disposal. A collection container will be placed at Metro Nashville police precincts where residents can drop off unused or unwanted medications. To increase public awareness about the proper disposal of pharmaceuticals, the containers also will be taken to community events, including the city’s Earth Day Festival.

Items accepted for the Pharmaceutical Collection Program include:

Items not accepted in the program include:

“Monitoring across the nation has indicated the presence of pharmaceuticals in our surface water and waste water,” says TDEC Commissioner Bob Martineau. [Was this in a press release?] Establishing a permanent collection of drop-off boxes provides a safe and viable disposal option to keep drugs out of our water and off the streets, he adds.