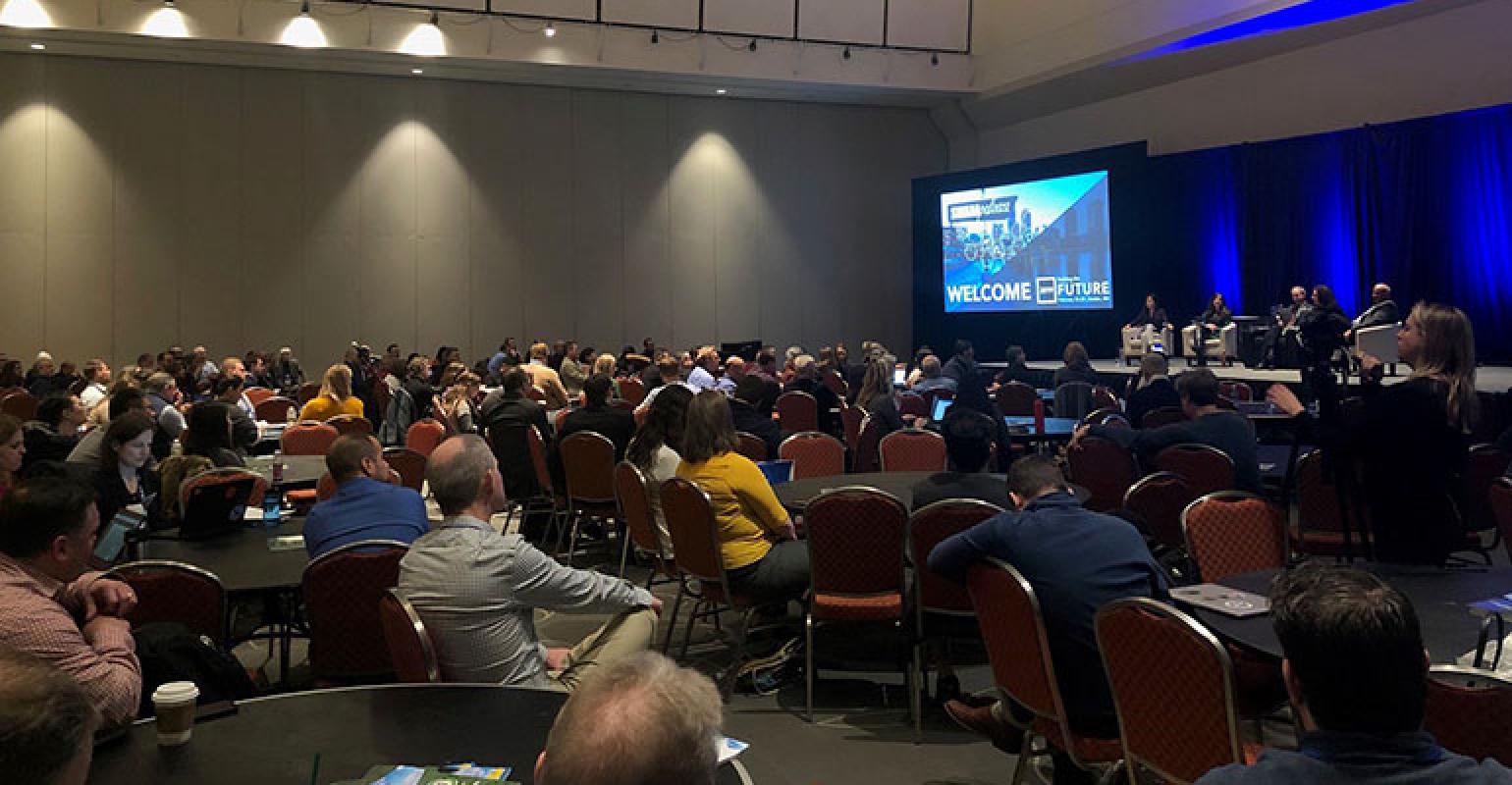 The second day of the show included the SWANA Technical Division Awards as well as keynote and education sessions.

SWANApalooza, the Solid Waste Association of North America’s (SWANA) technical gathering for professionals to explore environmental solutions for integrated solid waste management, is taking place this week in Boston. The show began on Monday with a plethora of meetings and certification courses and continued into Tuesday with an exhibit hall, the SWANA Technical Division Awards as well as keynote and education sessions.

“I am very pleased by the overall attendance and level of engagement by public and private sector attendees,” SWANA CEO and Executive Director David Biderman told Waste360. “The keynote sessions Tuesday morning on the new normal for recycling and marine litter were extraordinary, and I expect Wednesday’s sessions on shrinking disposal capacity in New England and Michael E. Hoffman’s always popular state of the industry session to be excellent as well.”

Here’s a look at some of the highlights from day two:

• During keynote session “The New Normal in Recycling for 2019 and Beyond,” Bob Cappadona of Casella Recycling, Corinne Rico of Gershman, Brickner & Bratton, Inc., Stephanie Sidler of Canada Fibers and Robin Wiener of the Institute of Scrap Recycling Industries, discussed the opportunity North America has for creating jobs while generating processing capacity for recyclables that formerly were shipped outside the continent to markets in China and other Asian countries. They also discussed how technology innovations and education campaigns are responding to demands for decreased contamination in materials sent for processing.

Wiener spoke about the three sources of recycling—commercial, industrial and residential—and the role that demand plays in the industry. She said, “Recycling is a demand-based industry, and recycling is not successful unless there’s an end user and a demand for the material.”

She also highlighted the “new normal” for the recycling industry, which includes greater cross-industry collaboration/cooperation to address challenges; a laser focus on quality and consistency to meet consumer demands; an increased investment in recycling equipment, technology and process changes; a shift in end markets/demand overseas; greater proactive engagement with governments to promote responsible recycling; and significant efforts to expand domestic demand. 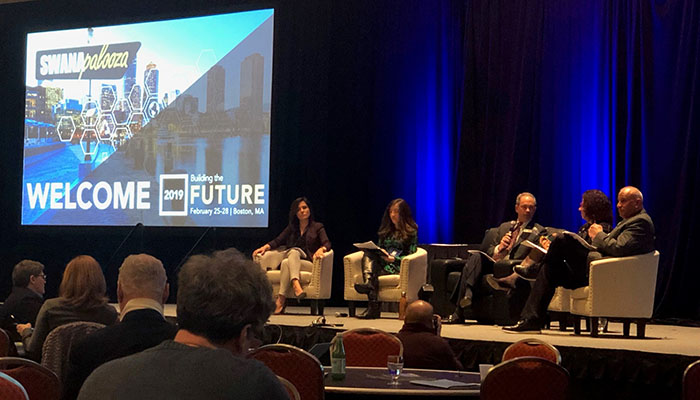 Cappadona went back to the basics to stress the five items that shouldn’t be placed in recycling bins—food waste, clothing/textiles, tanglers, plastic bags/film and lithium batteries. These items can pose safety risks, cause damage to equipment and present contamination challenges.

He also shared that while recycling has its challenges, there is good news. He said consumers still want to recycle, recycling volumes are still strong, domestic paper mill infrastructure is being built, equipment upgrades are being considered, the industry is recycling smarter and better and the industry will soon have a cleaner recycling stream to improve the quality of materials.

Rico explained that the recycling system is very complex, and it’s going through a reorganization phase, which will allow the system to be more resilient. She said, “A resilient system adapts to challenges and opportunities in order to become a better system.”

Sidler discussed five ways that Canada can meet the challenges of recycling:

• During keynote session “Marine Litter—The Last Straw?,” April Crow of Circulate Capital, Yuanyuan Cui of Closed Loop Fund, Jenna Jambeck of the University of Georgia and Kara Lavender Law, Ph. D. of Sea Education Association spoke about the creative ways people are reusing plastic waste to make new products; communities considering banning plastic bags, straws, balloons and other materials that end up in rivers and oceans; and how to prevent marine litter from entering the waterways in the first place. 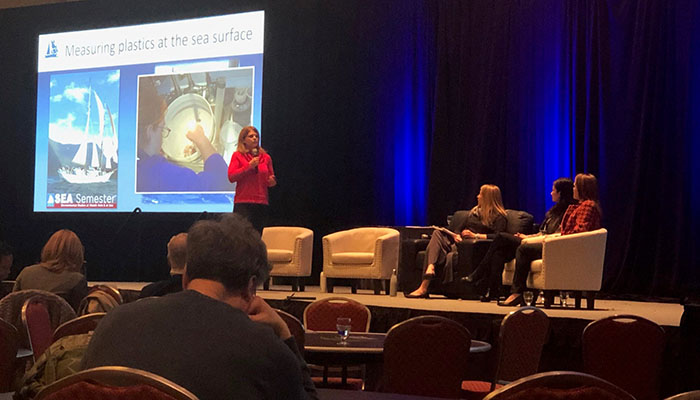 Cui touched on some of the marine litter problems in Asia, stating that 10 rivers (seven of which are in Asia) carry 90 percent of the plastic in the world that ends up in the ocean. She said that the rivers have two main things in common: a generally high population living in the surrounding area and a less than ideal waste management process.

She also shared that the potential market value of unrecycled plastics in China and the U.S. is $230 billion annually. In the U.S., more than $5 billion is spent annually to landfill commodities that, with advanced recycling infrastructure, could be sold for more than $15 billion.

• At the deep dive session “Workshop on Tools and Approaches to Fight Contamination in Your Community Recycling Program,” Chris Coady, Alita Kane and Tricia Tiedt of The Recycling Partnership and Marissa Perez-Dormitzer of the Greater New Bedford Regional Refuse Management District encouraged show attendees to identify challenges for fighting contamination and to develop an action plan to combat contamination at the curb. 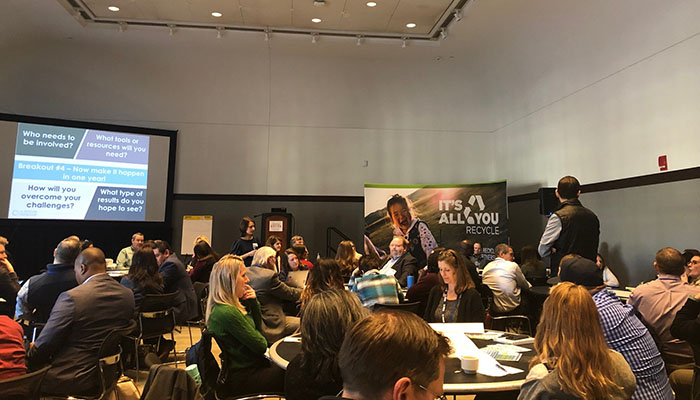 Some of the challenges identified by attendees were funding, staffing, diverse populations, languages, enforcement, wishcycling, different programs in different cities, pay-as-you-throw programs for trash while recycling is free, elected officials and their demands, symbol confusion, confusion at the bin and the statement of “It’s not my job.”