Confessions of a Recovering Recycler 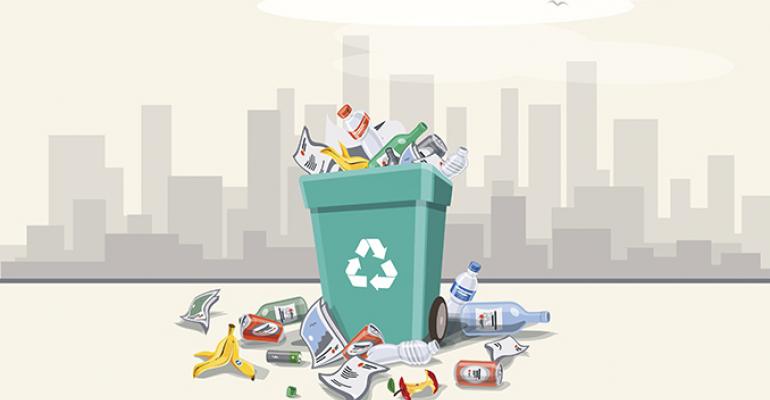 "A cynic is a man who knows the price of everything, and the value of nothing."—Oscar Wilde

We are facing a resource conservation crisis. Asia has rejected millions of tons of American cardboard and plastic due to contamination problems. Contamination in the U.S. is high since recyclables are often dumped into one bin instead of multi-streamed or separated from the source. Now, China has strict standards for recycling materials it will accept, requiring contamination levels in a plastic bale, for example, contain one-tenth of 1 percent. The situation is dire for many localities as recycling costs have skyrocketed. Many municipalities have stopped recycling, greatly increasing disposal.

For more than 40 years, I championed marketing secondary materials as a recycling coordinator, working in towns, cities and regions. I have helped recycle a wide variety of reused products, from tennis balls to motor oil. I have worn many hats to promote secondary end markets. Without finding new economic opportunities for recyclables, it may be discarded. Incorporating some type of lifecycle value to these materials will best manage Cradle to Cradle opportunities.

Being a vanguard for recyclables in a throwaway culture has been challenging. Like lessening climate change, the consequences of not doing so are enormous.

People's byproducts go to the path of least resistance. Unfortunately, we're just beginning to realize the cost and price of such foolishness. The real irony is that we call it waste management at the expense of resource conservation. Tragically, we're seeing this in all aspects of our lives. For example, in the healthcare industry, a third to half is mismanaged (1). Symbolically, both our waist and waste are expanding. Both areas are sweetened by various special interests. The culprit is simple: ignorance, greed and inequalities. Also, the lower class is more exposed to the hazards of these enterprises. Throughout this article, I have referenced my past articles in this regard, like the burning of trash.

Any recycling professional knows that without establishing a secure end market, the whole business fails. My dad's congressional tax expertise allowed me to observe how subsidies and other incentives have stimulated cradle-to-the-grave economics.

I even got to testify before a House subcommittee to fund the Used Oil Recycling Act of 1980 to create public awareness campaigns of the tens of millions of do-it-yourself oil changers who mostly disposed their drainings.

Fortunately, I had months before I helped build a used oil recycling plant in Alexandria, Va. Just several hundred yards away was an asphalt plant with a demand for 10,000 gallons per day for No. 4 industrial fuel. Too bad hundreds of millions of gallons of used oil are thrown out every year. Over the years, I spent countless hours promoting to re-refine oil back into new lubricants; however, the low price for crude oil made such enterprises difficult.

The economics of recycling have always haunted this endeavor since increased supply lessens demand. Back in 1980, I was the first recycling coordinator for Washington, D.C., and in order to get paper recycling, which contributed more than 45 percent of the waste stream, and to fill the precious white copy, all you had to do was throw a few color sheets. The price of the paper then went from $140 a ton to $30 a ton.

Quickly, I learned how profitable the scrap business was—and recycling firms’ accounting methods. Compound this with working for the most wasteful cities in the United States, whose whole operations ran by the idea of “use it or lose it.” If you save money you lose money in next year's budget, so waste was further subsidized. Washington, D.C., spends many more times than other cities across the country since the federal government picks up the tab.

I grew up in Montgomery County, Md., a very wealthy suburb of Washington, D.C. In 1977, I helped start the county’s curbside newspaper program and also worked with the Beverages Industries Recycling Program. Few counties are in the beverage business, and Montgomery County makes billions of dollars a year from the sale of liquor.

Montgomery County had a 56 percent recycling rate in 2018—13 percent of the material received was contaminated and couldn't be recycled. The county pays for all its waste services through property taxes—$4.5 million in revenues was received in 2017 (2).

Without reuse first and a well-thought-out sustainable design process, we are adding to the problem. The lack of smarter packaging and full-cost accounting shows the ramifications with the unattended consequences of our global marketplace. Unfortunately, we all suffer from these environmental consequences. However, with today’s horrific plastic pollution, numerous innovations are happening. A recent Forbes article cites 91 percent of plastics is not recycled.

PepsiCo announced recently that its Aquafina brand water will be sold in aluminum cans in the U.S.

Looking back, Earth Day 1970 was an end market disaster. All sorts of recycled materials were collected, creating a flooded market for these secondary materials. Since the late 1970s, I have explored markets for recycled materials. Without first identifying a secondary market, creating a demand for recycling programs failed. In the 1980s, high disposal fees in major cities briefly stimulated recovery while punishing local taxpayers. Also, high collection costs and other factors hampered recycling. Reuse always did well among the lower incomes; however, mass production of things like electronics hindered repair efforts. Reduction of the most favored practices was also harmed by the public/private "use it or lose it" budgeting, stimulating further waste.

Years before, I spent countless hours trying to find recycling paper markets, including talking to brokers to send materials to China. One friend spent decades trying to make this work. The challenge exceeds not just supplying the man, but the favorable tax incentives given for virgin materials.

Also, many recycling market development options backfired, giving tax credits to certain industries for paper balers, which, to me, is corporate welfare since these firms would be buying cardboard balers regardless of tax credits since it would pay them back.

Regarding plastics back in the mid-80s, I worked researching one project for recycling plastic film into plastic wood possibilities. Recycling plastics is complicated since there are so many types. Plus, there are enormous transportation costs because of its tremendous volume given its light weight.

In the late 1980s, I worked on the East End of Long Island as a recycling manager on a state $300,000 grant. Tipping fees were so cheap that collecting materials didn't make money. One of the towns was East Hampton. It had no garbage fee, so recycling cost the town. Biologist Barry Commoner said this town could recycle 90 percent of its waste years before. Several years later, the town spent millions on a composting facility that barely lasted a few years before going bust due to lack of material.

Ironically, in my next job working in Virginia, I watched the state become the No. 2 importer of New York trash. It's simple environmental economics. If you don't have some type of end user fee or put in the environmental cost upfront for collecting materials like plastic, it is going to be thrown away.

A better recovery agenda would be to concentrate on tonnage and toxics. For example, why are we saving glass, which is silica sand, and throwing out more than a billion light-duty motor oil filters, with every 16 filters containing 1 gallon of used motor oil? There needs to be a wiser design of the three Rs. Reduction must first be emphasized, and there needs to be lifecycle analysis brought into looking at what makes the most sense. Bottom line, the whole thing is funny money, especially when you look at landfill financial insurance funds that may not be there when the landfills close (3).

This happened because they mandated golf courses for 90 days to try out and see the results of using plastic versus metal spikes. So, back in the mid-90s, golf superintendents, major spike makers and shoe companies partnered to make Softspikes plastic cleats become the norm. All the high-end clubs saw the immediate benefits and a tipping effect was created. You do not find metal cleats today simply because they're obsolete, more uncomfortable and they tear the heck out of everything they touch (4).

Back in the late 1990s, I volunteered as the chairman of Virginia’s Buy Recycled Business Alliance (5). Fortune 500 companies are well aware of investment recovery and in the importance of developing markets. Many of these captains of industries have long-term strategic plans looking to benefit from resources for the future.

Also, during the same time, I secured two U.S. Environmental Protection Agency $50,000 market development grants to promote paper, electronics, antifreeze and other materials. By the way, polyethylene terephthalate (PET) plastic and antifreeze share many chemical similarities. I was amazed at how white paper or mixed paper was being thrown out just because the building service firms were not properly communicating with the cleaning firms to recycle.

In one grant, as Northern Virginia governments then did not wish to participate garbage by the bag or pay-as-you-throw, my boss spent $15,000 in waste reduction brochures, where the majority of them were eventually recycled. Bottom line, increased affluence shows increased wasteful effluence.

Finally, in 2002, I explored recycling marked about for rural areas since transportation to market is an expensive factor and cooperatives create better economies of scale. I attempted to do a recycling market co-op back on the East End of Long Island that I wrote about in 1989 in Biocycle Magazine. Opportunities happen when alternative markets are created.

Any manufacturer that produces materials must show some stewardship for this material and some designer planning process on how to best address end of life of their packaging or process. Look at the lead-acid car battery with its 97 percent recycling rate, for example.

Close to home, in 2018, Shenandoah County, Va., reported a 45 percent recycling rate. Many nearby localities have discontinued recycling because of its cost. Shenandoah County accepts recyclable materials because it has various recycling vendors that process its secondary materials. However, this may be in serious jeopardy since they collect mixed plastics because of consumer convenience. Also, the county grinds its glass and uses it at the landfill since there are no glass markets.

Shenandoah County last year recycled 38,566 tons of materials and disposed of 46,721 tons of waste. It was estimated to close and clean up the landfill in the future. A general obligation bond of $11,894,770 will be required when this facility closes (6). Time will tell what will happen when this landfill closes (7).

Once there, when we awaken to the environmental economics of things like landfills and other future costs, we will pay dearly decades from now. If we can design golf footwear, we certainly can design more efficient resource conservation methods. Advancements in climate change, healthcare, education, nutrition and other key areas present new opportunities for future growth. Future generations and resources will be critically impacted. Failure to plan, preserve and protect is a dangerous iceberg that we on the proverbial Titanic have yet to address.

For 40 years, Rob Arner has worked on water quality improvement programs and resource management issues. He has experience in implementing all types of conservation programs in the Washington, D.C., area and in other parts of the U.S. and abroad. Also, he has provided technology transfer and technical assistance in all aspects of pollution prevention.