A Trash Can in the Water? Solutions in the Fight Against Ocean Plastics 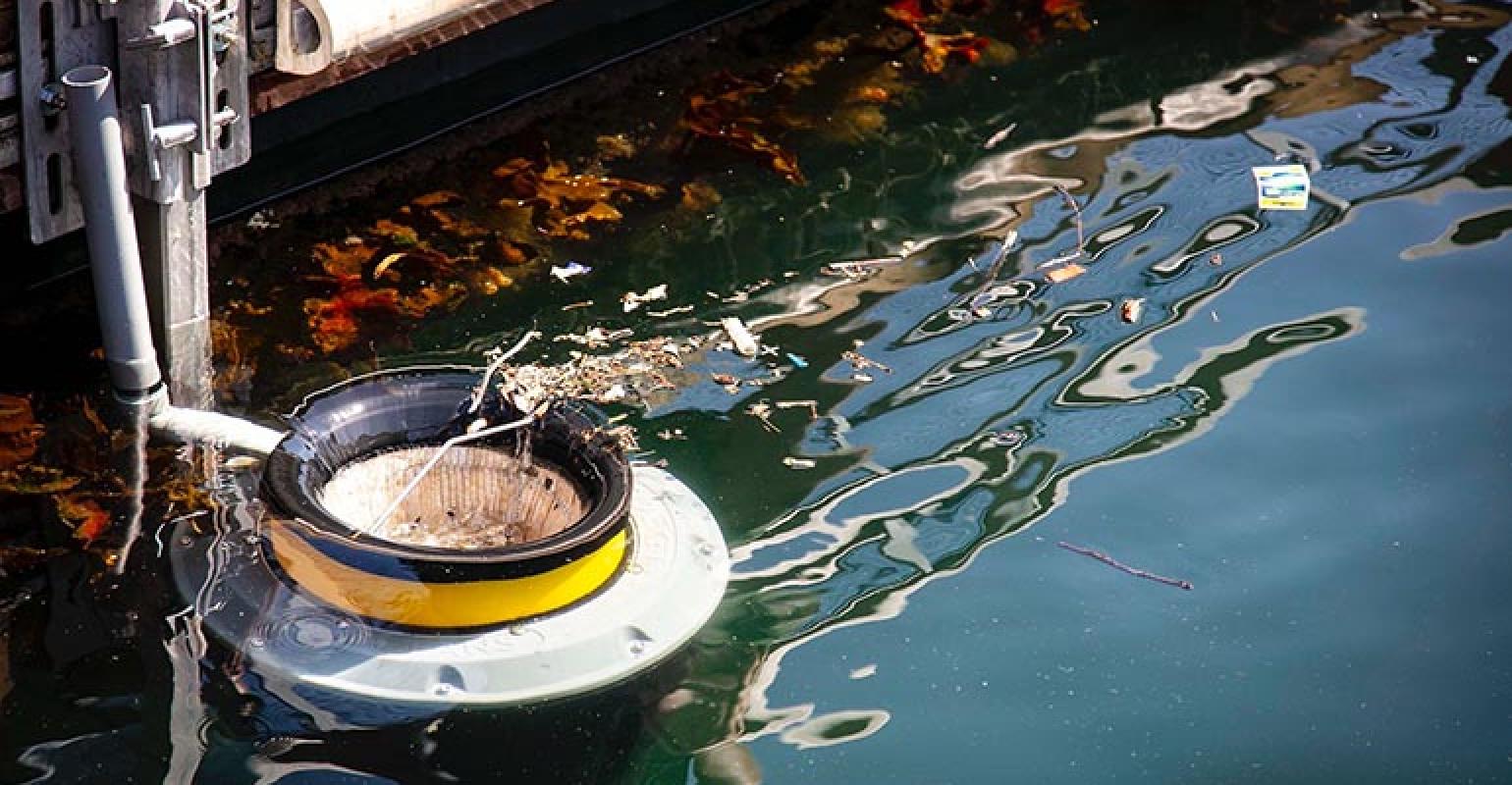 As plastic pollution continues to devastate marine life, people around the globe are working on both preventive and reactive solutions to help solve the problem.

It’s hard to forget the image of a sea turtle with a plastic straw lodged up its nostril or the young whale found dead in the Philippines after consuming 88 pounds of plastic. As difficult as those images are to take in, it might be slightly easier for those who don’t see the devastating effects of plastics pollution firsthand. But for those who spend their lives near the coast or sailing the world, the plastics pollution crisis is all too real and visible.

Now, as more and more plastics and microplastics are found in the ocean and the food chain, people around the globe are working on both preventive and reactive solutions to help solve the problem. Pete Ceglinski is one of those people.

Ceglinski developed a healthy respect for the environment at a young age, growing up surfing, swimming and scuba diving in Australia. His first career was as a product designer, where he was responsible for designing products using plastic and injection molding. Eventually, he decided to take some time off from work and traveled the world for the next 12 years, participating in events like the Volvo Ocean Race. 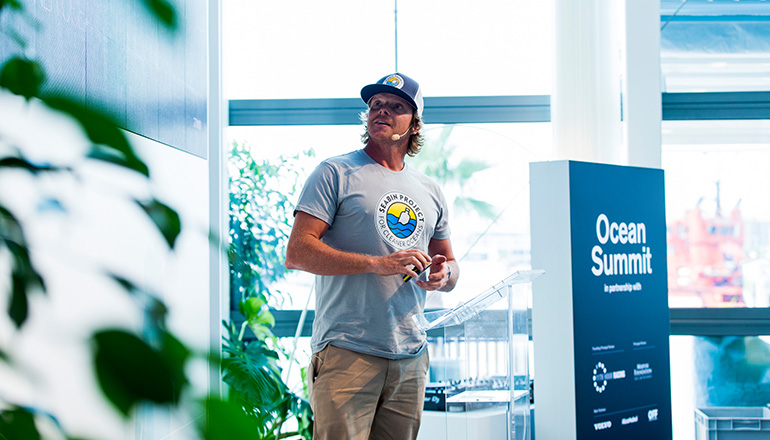 “What really hit home was that anywhere we went—it didn’t matter what country it was—the marine litter was always there,” says Ceglinski. “What was different was the amount that was in the water or the language and brand names on the litter.”

During his travels, Ceglinski got a call from his friend Andrew Turton, who invented the idea for a device, known as a Seabin, which is essentially a trash can for the water to help reduce and, ultimately, eliminate pollution in waterways. Turton didn’t know how to bring his idea to the next stage of development and called on Ceglinski to leverage his experience as a product designer.

Since June, Ceglinski, along with his pregnant partner, Sacha, and their one-year-old son, has been touring the West Coast—from San Diego to San Francisco and then to Hawaii and to Puerto Vallarta, Mexico—in a truck packed with surfboards and Seabins. 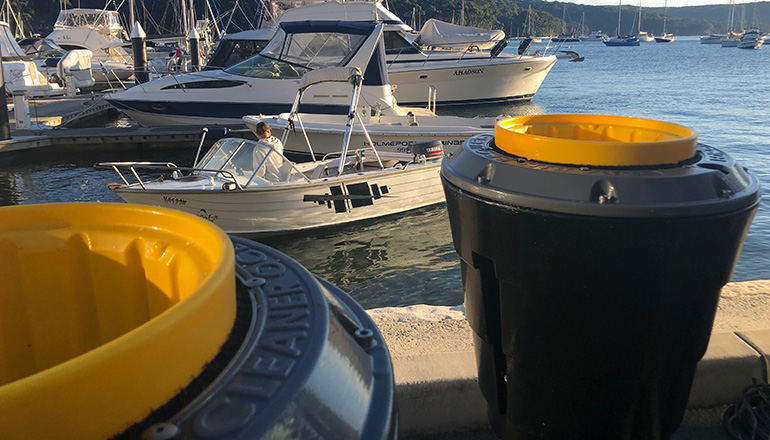 Since the Seabin Project launched in the U.S. two years ago with Safe Harbor Marinas, an estimated 16.6 tons of waste has been extracted from U.S. waterways. Each Seabin installed can remove up to 1.5 tons of waste from marine waterways per year. Since Ceglinski crowdfunded the Seabin invention in 2015, the product has received substantial uptake throughout marinas, harbors and ports around the world. To date, there have been 719 Seabins installed worldwide. Each day, a total of 1.95 tons of waste is extracted from the world’s waterways.

More than 70 units are predicted for installation throughout July, August and September, resulting in an additional 90 tons of marine pollution extracted from U.S. waterways each year.

“The U.S. is our most important market entry milestone for the team at Seabin,” said Ceglinski in a statement. “Our goal is to install, demonstrate, give corporate presentations and host community events throughout the tour. The issue of ocean plastics is ‘everyone’s problem’ and not any one person or group can solve it by themselves. We are looking to engage and activate communities by giving them the Seabin technology as a powerful communication platform.”

Seabins work like a pool skimmer. Each device has a pump at the bottom and allows users to skim the top inch of water and filter out plastic, litter, microplastics and oil. The idea was to build a sustainable floating garbage bin that could collect water-borne plastics and trash 24 hours a day. Over time, the scope of the project evolved into a comprehensive research, technology and educational initiative. 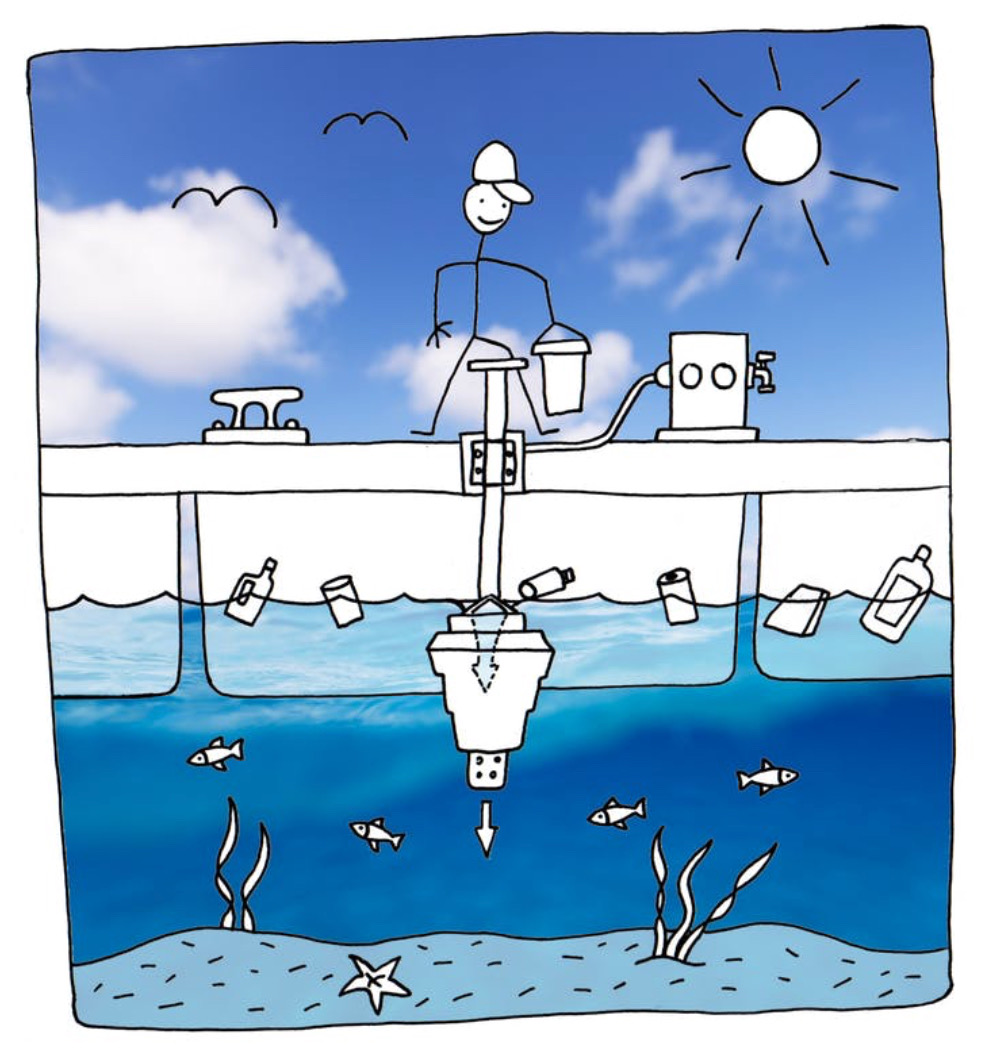 Throughout Ceglinski’s tour, Seabins are being installed at marinas, ports and yacht clubs, which are ideal locales since there are no huge, open ocean swells inside the marinas.

“For us, the most important thing to acknowledge is that technology is not a solution,” says Ceglinski. “It’s only part of a solution, so we focus quite a lot on the preventative missions, which means, how do we stop the litter from entering the water in the first place? We have to have reactive and preventative solutions in parallel.”

“From a design perspective, it’s working with schools and children through STEM [science, technology, engineering and mathematics] workshops and coming up with ideas and technologies,” he adds. “We start out in the ocean, which are steps too far already. For us, it was starting close to the source of the problem and intercepting as much stuff from the ocean in the early stages. Again, technology is not the solution. In a perfect scenario, we shouldn’t have a need for the Seabins; we shouldn’t have to put trash cans in the water.” 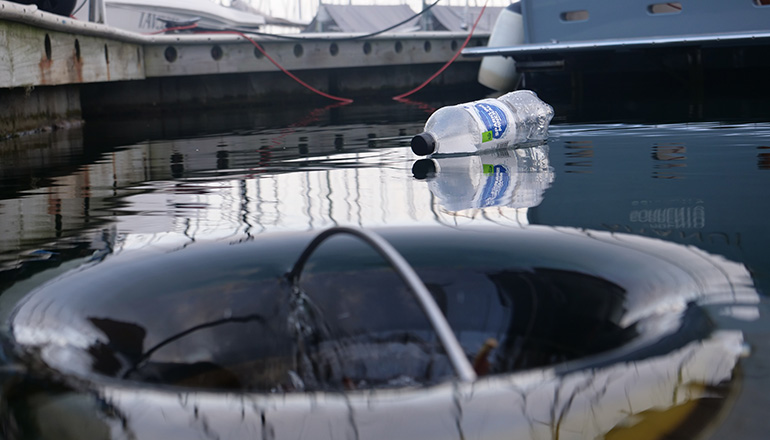 The Seabin Project is a 50-50 business model, partly for-profit and the other part nonprofit, in which Ceglinski and Turton set up a foundation, where they collect data and hold community events and STEM workshops.

“For us, that was the most important—putting the prevention and reactive solutions together,” explains Ceglinski. “We’re trashing the planet, and we’re trashing the ocean. We wouldn’t have oxygen without the water. We don’t want polluted water. This is something that is close to my heart. I don’t want my children to have to deal with pollution in the water, and I don’t think anyone else wants to either.” 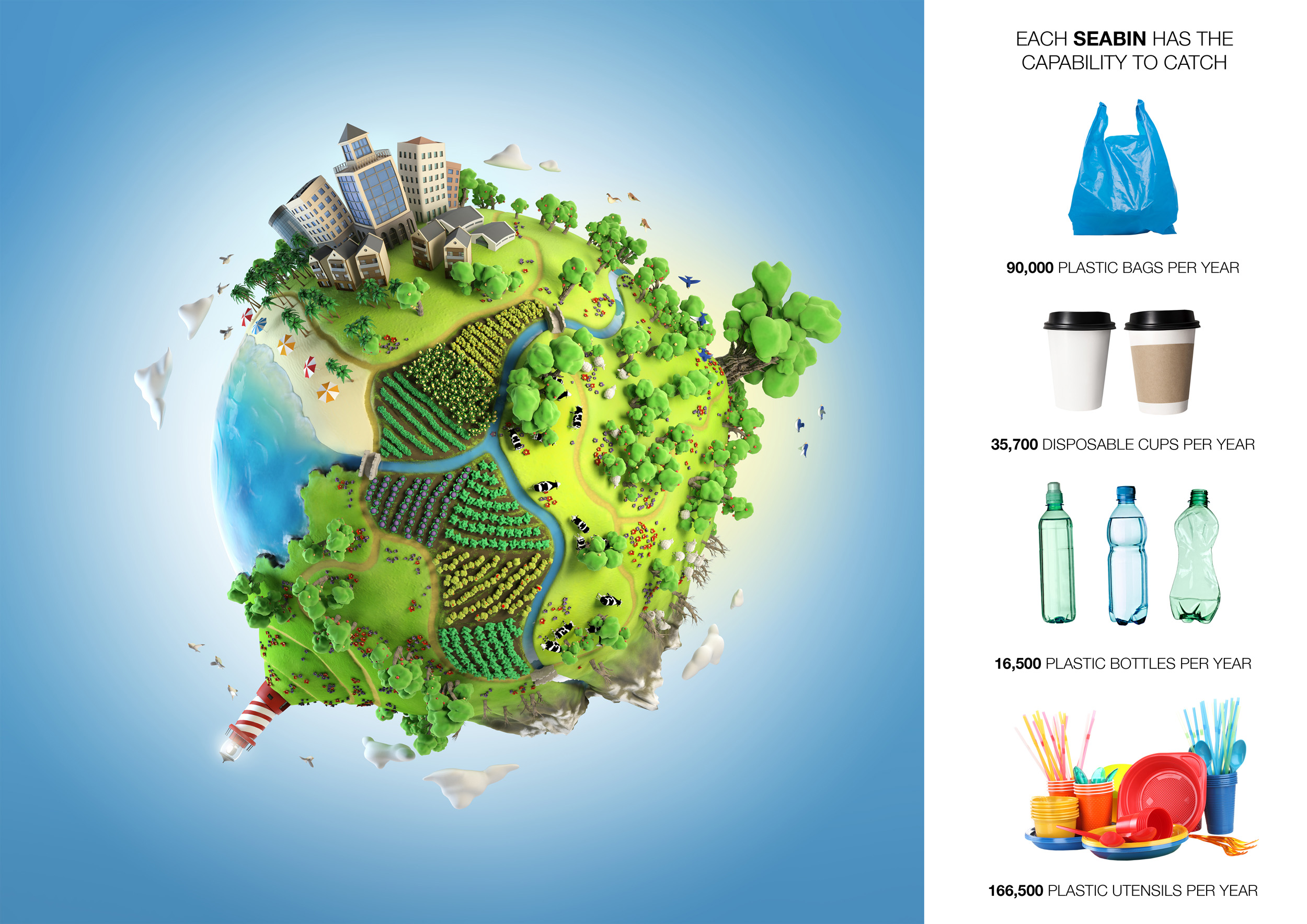 Also on a mission to study and help stop the influx of plastic pollution is Emily Penn. About 11 years ago, Penn, co-founder and director of eXXpedition, an all-female sailing voyage and scientific research mission to study plastic pollution, took a boat from England to Australia as a way of “hitchhiking” to a new job as an architect. During the voyage, Penn came across plastic in the Pacific Ocean, and for her, that’s when everything started to change. 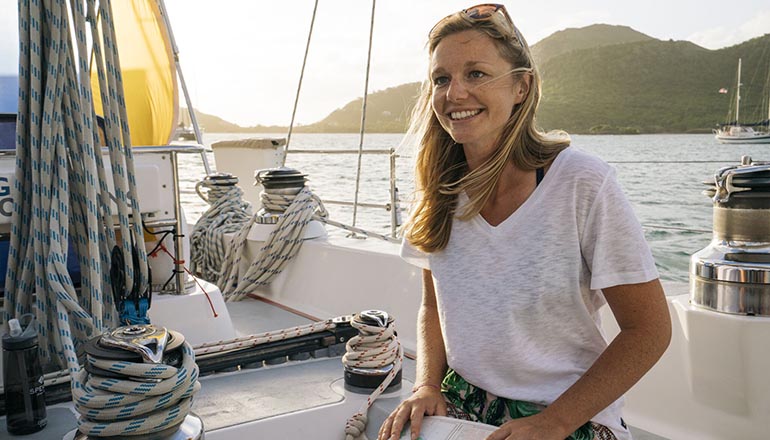 She set up a series of voyages in the South Pacific that led to the eXXPedition and has spent the last eight years leading these global expeditions.

Over the years, Penn spent time at sea learning more about the plastics issue and gyres—massive accumulations of plastic in the ocean. She realized that plastic was breaking down into tiny fragments, ending up in the food chain and becoming really challenging to clean up. 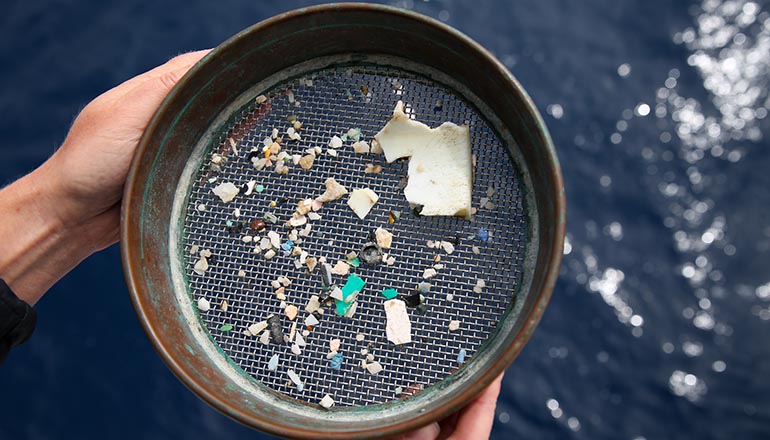 EXXPedition focuses on science-based solutions that aim to identify the sources of where this plastic is coming from and how to stop it from getting into the ocean. Additionally, there is a lot of communications work involved, particularly around the fact that ocean plastic is small, fragmenting and sinking and needs to be dealt with at the source. And the final piece of eXXPedition is about building a global army of women who see and understand the problem and then take their experience back home and work in a multidisciplinary way to help find a solution. 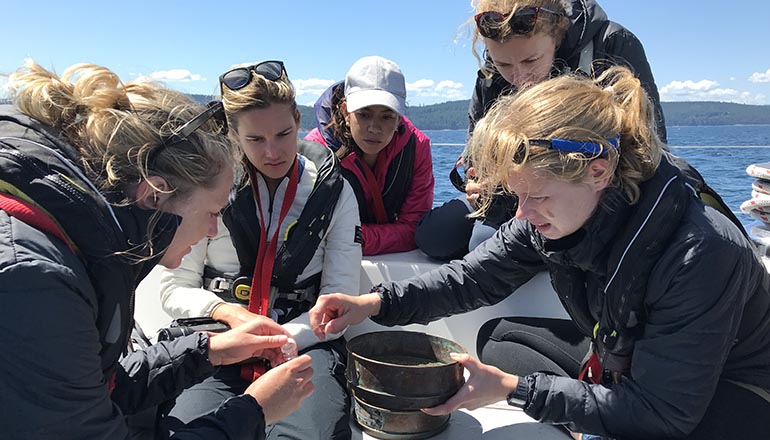 Over the past five years, eXXPedition has done 11 voyages, and Penn notes that efforts this year are scaling up. The eXXpedition Round the World 2019-2021 starts in October and will take two years navigating the planet and sailing to four of the five gyres and the Arctic. Penn says 300 women will join over those two years to become ambassadors for fighting plastics pollution. The group seeks women with the greatest opportunity to create real impact from their experience on board. 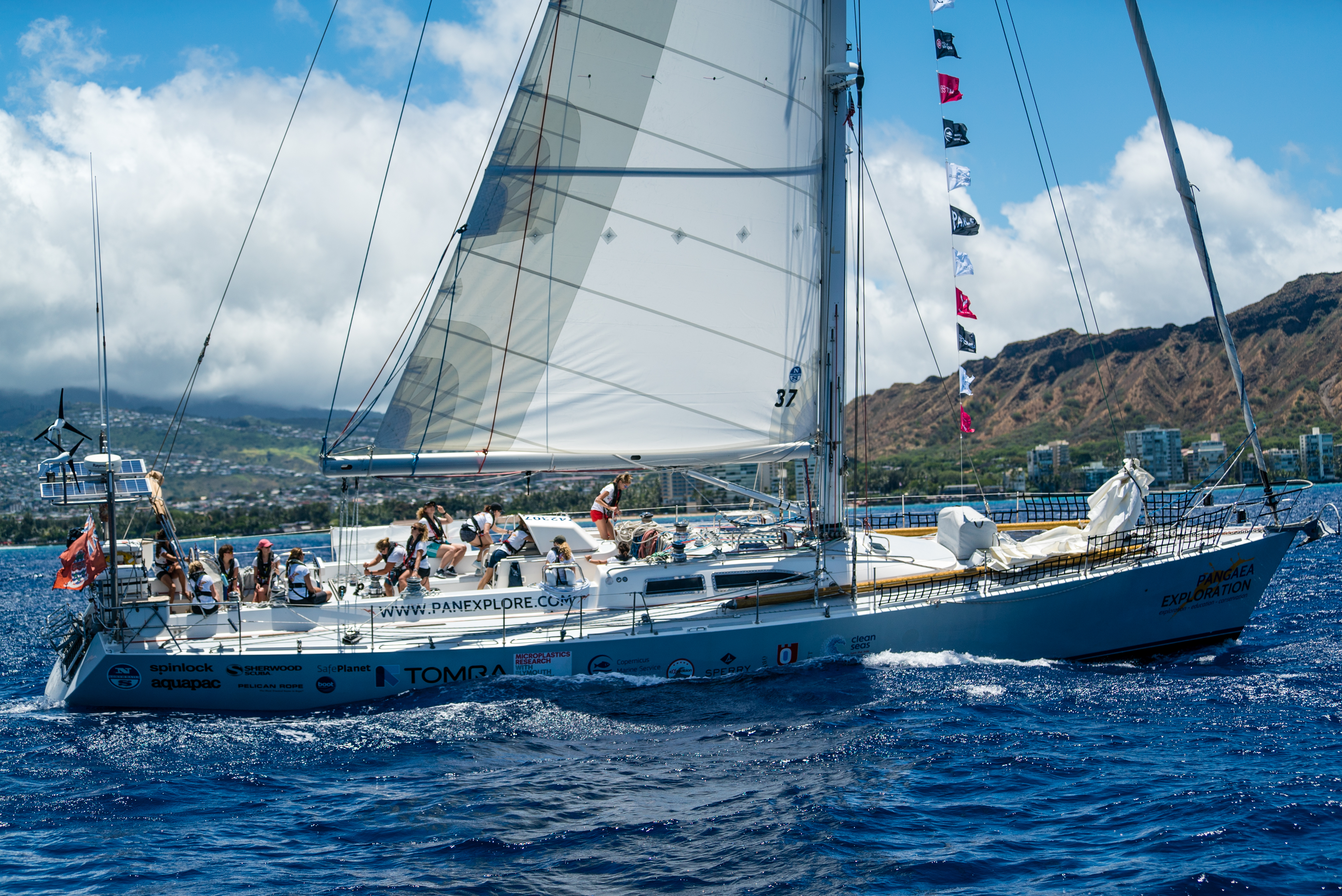 “I think seeing the issue firsthand is the most shocking,” says Penn. “You’ve seen the pictures on TV or in social media, so when you get out there, you think you know the problem. But when you take your first net through the water, pull it up and see that it looks clear, it isn’t until you pull out a sample and really look at it to realize that there are hundreds of fragments of plastic in your hand. I think that’s a real realization point for people—that even though you can’t see it with your eyes or from space, actually the whole surface of our ocean is covered in these little fragments of plastic.”

“I think that is a very powerful moment that really transforms people, as well as seeing the interactions with marine wildlife,” she adds. “When you’ve got dolphins appearing at the bow as the sun is going down, it’s an extremely magical moment, but it is juxtaposed with seeing a plastic fragment go by the boat every 10 seconds. It’s all those moments that mirror upon each other and really give this powerful experience that changes who you are and your outlook on the problem.” 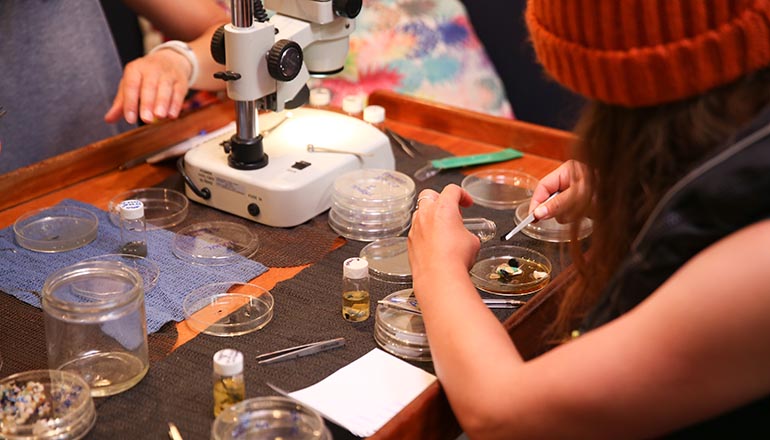 This will be the first eXXPedition that the group will conduct solutions-based research by working with the University of Plymouth in England on a circularity assessment to understand what waste is being mismanaged and where there are opportunities to change practices on land.

Scientifically, there is more to learn, Penn points out. But some of the solutions to solving this global crisis reside in policy change, through product redesign and through behavioral change.