A Look at an Installation in Madrid, Spain, that Addresses the World's Plastic Waste Problem 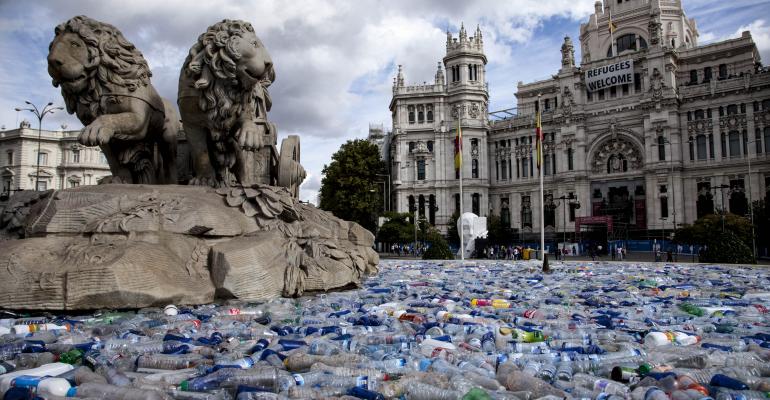 Start Slideshow ›
Luzinterruptus designed an installation made from 60,000 recycled bottles for the Luna de Octubre festival in Madrid, Spain.

The installation, Plastic Islands, was installed at the fountains of Cibeles, Neptuno and Apolo, Madrid’s most emblematic fountains located over the Prado-Recoletos axis. The installation covered the entire surface of water with recycled bottles, which were illuminated and left on display at night so festivalgoers could reflect on the massive usage of plastic in the world.

According to Luzinterruptus’ website, the goal of the installation was “to replicate, at a smaller scale, the so-called ‘eighth continent’ made of plastic and garbage which is alarmingly taking over great areas of the Pacific. Governments remain passive before this situation either because they lack interest or because they are incapable to solve this problem. They are allowing this huge mass of about 4 million tons of more or less crushed plastic to shape about 22,200 kilometers (about 13,794 miles) of irregular surface which goes 30 meters (about 98 feet) deep under the water, and is destroying most of the marine wildlife in the area and transforming the ecosystem.”

Last year, Luzinterruptus also created a labyrinth of plastic waste in the middle of the Plaza Mayor in Madrid and an installation made entirely out of plastic bags for the FAB Festival de Bordeaux in Bordeaux, France.