An Installation in France Highlights the Threat of Plastic Waste 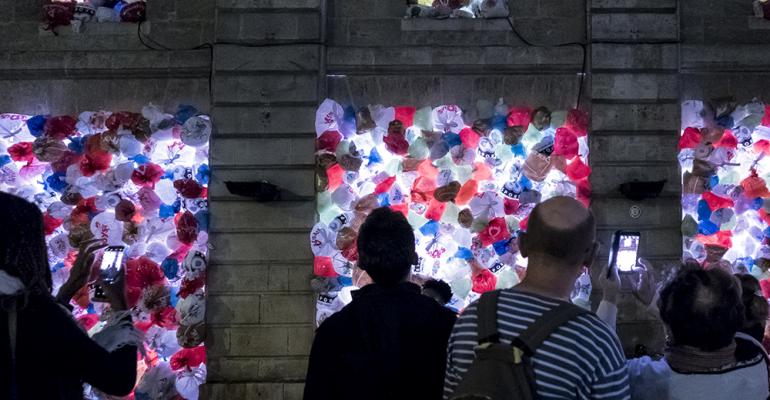 Start Slideshow ›
Luzinterruptus designed an installation made entirely out of plastic bags for the FAB Festival de Bordeaux in Bordeaux, France, which took place in October.

To help raise awareness about the threat of plastic waste, Luzinterruptus, the anonymous Spanish art collective, is creating works of art made from items like plastic bottles and plastic bags. Earlier this year, Luzinterruptus created a labyrinth of plastic waste in the middle of the Plaza Mayor in Madrid, Spain, and now, the art collective designed an installation made entirely out of plastic bags for the FAB Festival de Bordeaux in Bordeaux, France, which took place in October.

The installation, titled “The Plastic We Live With,” was inspired by France’s ban of single-use plastic bags that was passed last year. To create the installation, Luzinterruptus teamed with the La Direction Généralle des Affaires Culturelles de Mairie de Bordeaux and Asociacion Bénévoles en Action to outfit the gaps in the façade of the city’s old Virgin Megastore building with more than 6,000 plastic bags, which were collected from warehouses from all of the city’s stores.

According to the art collective website, “The idea was to graphically visualize, in a way that could be understood by all, the plastic excess that is around us, a recurrent subject in our work and in life, since practically everything we consume is either made with this material or it is wrapped in it or we are eating it in small particles in the meat and the fish we ingest. Plastic we are and to plastic we shall return …”

The installation, which remained lit for four days, could be viewed both during the day and at night. At night, the interior was lit and the windows filled with plastic bags resembled stained glass. Once the installation was dismantled, all of the plastic material was properly recycled.