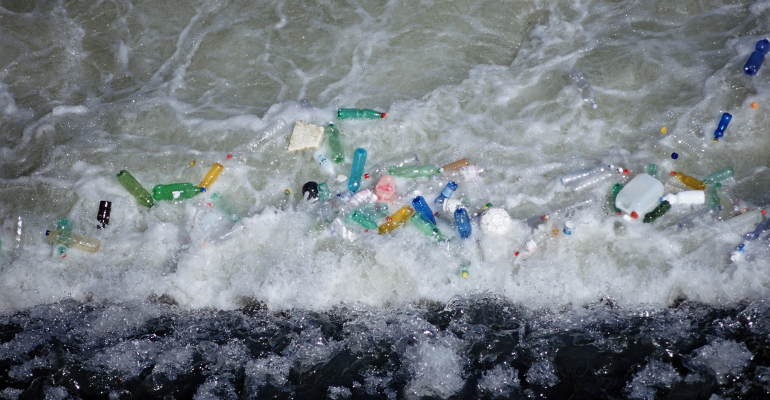 Aiming to scale as fast and as much as it can, Cyclyx formed a consortium of end users and suppliers, with Dow among the latest to join the 50-member group. The chemical giant ships 80,000 tons of fossil-derived feedstock to its crackers several times a month. At the same time, it’s pledged to be carbon neutral by 2050.

About 90% of all plastics winds up on landfill, partly because the waste and recycling industry has no system to effectively sort and recycle it. That’s because it identifies this material by object rather than by its chemistry, according to Joe Vaillancourt, Cyclyx CEO. The plastic waste management company, founded by chemical recycling corporation Agilyx and ExxonMobil Chemical Company, is trying to switch lenses to recover and use more. It’s looking at waste plastic by its chemical makeup. Then it processes what it “chemically fingerprints,” qualifies it for ISCC+ certification, and delivers it to large operations according to those operations’ specs.

While the one-year-old operation is beginning to work with different industries, it mainly zeroes in on the petrochemical world. The plan is to show recyclers and processors how to prepare material for this industry to put back in its products. It’s complex; a thousand different chemical compounds may show up in a 10-pound sample of tested mixed plastics, Vaillancourt says.

“If you could source separate that material by product type you could divert PE, PET, and PP; but you would not necessarily know there were different chemical combinations. That’s why we chemically characterize; then we model pathways for use. We can channel to downstream customers,” he says.

Aiming to scale as fast and as much as it can, Cyclyx formed a consortium of end users and suppliers, with Dow among the latest to join the 50-member group.

The chemical giant ships 80,000 tons of fossil-derived feedstock to its crackers several times a month. At the same time, it’s pledged to be carbon neutral by 2050. Shorter term, Dow pledged to enable 1 million tons of plastic to be collected, reused, or recycled by 2030 and to enable 100% of Dow products sold into packaging to be reusable or recyclable by 2035.

“What we desperately need [to reach those targets] is scale. That scale needs to be met with scale of feedstock,” says Mary-Jane Hogg, global director of Waste Strategy for Dow.

Finding end of life plastics that will work within its system has been near impossible. Hogg exemplifies with vegetable packaging in a thermoformed tray with film on top.

“That film could be multilayers with many different chemistries. If we just take that package through a chemical recycling process you get what I will call a dreadful soup, with every chemistry you can imagine. And you can’t run it through the equipment our industry has because it would damage it,” she says.

Meeting specs whereby recycled content will work in its existing infrastructure will be important. The industry has poured hundreds of billions of dollars into that infrastructure, and even if it were switched out, the transition won’t happen overnight, leaving Dow to search ways to get recycled content containing only what works with what it has.

“So instead of having this dreadful soup, if Cyclyx can supply feedstock without chlorides that damage our metal structures, or without oxygen or nitrogen—if they can help me get only what I want—that can help me make a difference,” Hogg says.

Cyclyx started with enterprises like Dow, with the muscle to drive demand, and now is beginning to partner with municipalities, as well consumer packaged goods companies, equipment manufacturers, and retail companies, offering them industry takeback programs.

The programs have especially gained momentum among life science companies who send their single-use lab materials to Cyclyx, with the first life sciences initiative involving polystyrene that through chemical recycling was processed back to virgin equivalent polymer that is returned to the same supply chain.

“They source plastics to us then get new recycled content. There are other programs; each is a little different. But once we get ahold of the material, we can channel it to the right parties for the highest and best use,” Vaillancourt says.

He believes by assessing material based on its chemical makeup, that his hopeful goal of increasing recycling worldwide to 90% is eventually obtainable and that it can happen quicker locally.

Cyclyx has performed localized assessments at materials recovery facilities and identified recycling options for upwards of 90% of low-grade waste plastics that otherwise go to landfill. Now it’s trying to scale the ability to actually get those plastics into recycling systems.

A project in the city of Houston, the most recent of several municipalities to join the consortium, will be the first large-scale effort to initiate new takeback programs and to try and prove that currently nonrecycled plastics can be recycled at a significantly higher rate than 10%, which is the international average.

Cyclyx leverages artificial intelligence (AI), algorithms that help with characterization of thousands of waste sources. Each sample could have 200 or 300 data points to track in order to predict feedstock recipes that would serve the needs of a large producer.

The plan is to build plastic recovery facilities custom-designed for a specific operation’s output. The facilities will track chemistry of materials, so if a producer needed a high volume of recycled material, recipes could be predictively modeled to produce required specs.

Cyclyx is in the engineering phase of its first customized plastics recovery facility to produce feedstock for one downstream customer and is in negotiations with multiple companies to build more of them, Vaillancourt says.

As he continues working with Dow to understand its technical needs for custom feedstock, he is hopeful that his company will develop assets and or programs to advance that corporation’s commitment to the circular economy.

Dow is happy for this new avenue to tackle a huge problem: finding a way to incorporate tremendous quantities of recycled content leveraging  its system and for its purposes.

Says Hogg: “I joined Dow 30 years ago and have had many challenges, but nothing like this.  And that is what is exciting about working with Cyclyx. It’s a different way to try and solve the problem. To find a scalable solution, make the ingredients useful again, and in the most carbon-efficient way.”