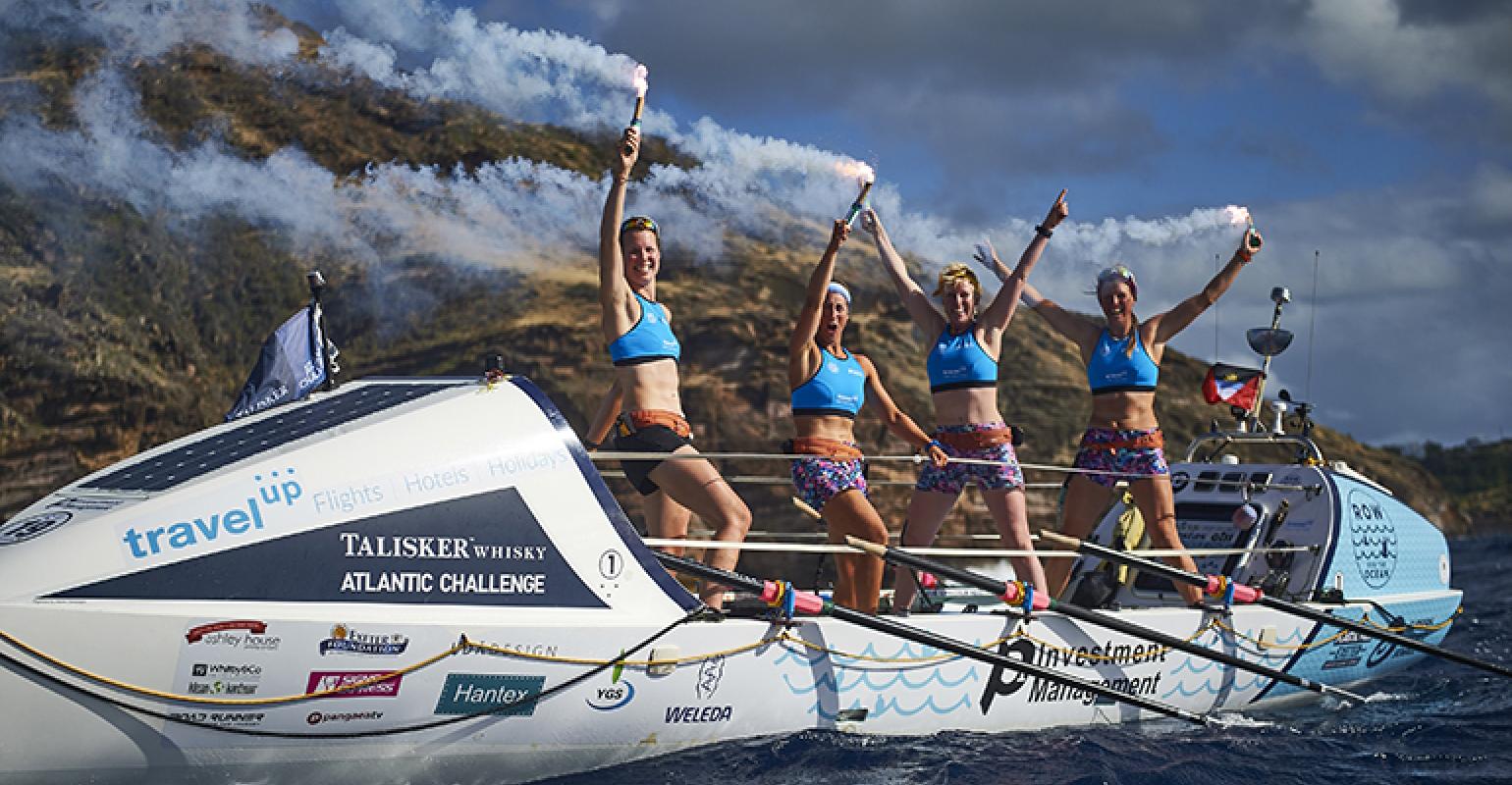 The team has completed the world’s toughest row to raise awareness of ocean plastic pollution for Surfers Against Sewage.

In the Talisker Whisky Atlantic Challenge, British team Row for the Ocean became the first all-female crew to reach the finish line of the 2018-19 race. Rowing 3,000-miles across the Atlantic, the adventurers completed the world’s toughest row in aid of raising awareness of ocean plastic pollution for charity Surfers Against Sewage.

Kirsty Barker, 28; Kate Salmon, 31; Rosalind West, 36; and Laura Try, 36, known as team Row for the Ocean, arrived in English Harbour, Antigua, after spending 43 days, two hours and 20 minutes at sea. The crew members were continuously challenged with early seasickness and power issues and had to dig deep physically and mentally as they battled against four-man team Atlantic Seaman, in which they conquered to take 10th place in a close race to the finish with only two hours between them.

Related: Row for the Ocean Team Takes on Adventure in the Name of Plastic

On their journey, Row for the Ocean was privy to breathtaking sea life where they were joined by whales that followed them for 30 minutes. This moment was tainted by the fact that they saw plastic every day on their crossing, which is why their cause for Surfers Against Sewage is so important. The money raised will help the charity to invest in protecting and cleaning up the ocean environment.

Each member of the crew shares a genuine connection to the outdoors and the sea. Try works for an ocean rowing boat builder and only took up rowing as she approached age 30. Salmon is a scientific consultant for the Metropolitan Office; and Barker and West both grew up by the sea and are keen rowers, who are part of Exeter Rowing Club with Salmon. Before the team set off from La Gomera, Canary Islands, they campaigned to make Exeter the first plastic-free city by 2020, which they will continue to do now they’re back home.

“We rowed an ocean to save the ocean, to put it simply,” said West in a statement. “We did see some plastic pollution in the ocean during the race, more plastic than wildlife, which was upsetting at the time as there wasn’t much we could do there and then. However, this is why we signed up to the race—to raise awareness of how much our seas are damaged by this unnecessary pollution and how with small steps we can all change this. Seeing it out there firsthand had a big effect on us all.”

Key stats of the Talisker Whisky Atlantic Challenge include:

“We are delighted for Row for the Ocean and their determination in making the most out of every moment to finish the 2018-19 race,” said Lisa Everingham, global Talisker marketing manager, in a statement. “To be able to support them in this lifechanging adventure and to be part of their journey has been a real privilege. The race is a truly unique experience and one that encourages the teams to switch off from their busy everyday lives, embrace the elements and rediscover what matters most.”