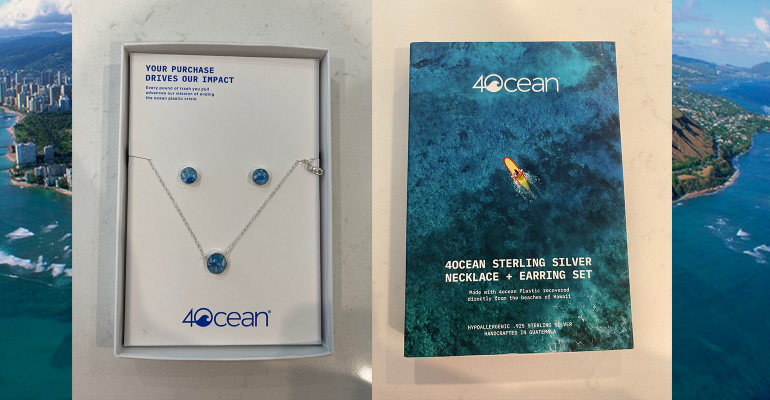 Last month, 4ocean, a purpose-driven business with a mission to help end the ocean plastic crisis, announced its latest product launch: a collection of sterling silver jewelry that features the artisanal inclusion of plastics recovered from beaches in Oahu, Hawaii.

This collection includes a pendant necklace and a set of earrings, and is meant to celebrate of 4ocean’s expansion to Hawaii. The company had existing ocean-plastics-collection operations in South Florida, Indonesia, Haiti, and Guatemala. The blue plastic flakes that are used in the new jewelry were recovered from the beaches of Oahu earlier this year. Each piece was then handcrafted in Guatemala by Wakami, a social system that connects rural communities with global markets.

The company notes that this new set “offers ocean lovers a new way to clean the ocean and raise awareness of the ocean plastic crisis.” Every purchase helps fund its global ocean cleanup operation and supports the movement to end the world’s reliance on single-use plastic. We recently sat down with the 4ocean team to learn more.

Waste 360: The new offering is made with blue plastic flakes that 4ocean recovers in Hawaii. Can you explain more about the materials that make up this jewelry?

4ocean: The sterling silver jewelry features blue flakes of recovered plastics suspended in a plant-based epoxy, and hypoallergenic .925 sterling silver. The blue plastic components were recovered by our team members on the ground in Oahu, Hawaii who are working everyday to remove trash and plastic from the Hawaiian shorelines. This recovered ocean plastic can include items such as fishing gear and household items such as baskets, detergent bottles, hair combs, and bottle caps. Once collected, the plastic was washed and flaked to create the blue flecks seen in the finished product, then sent to our partners and artisans to handcraft the final pieces you see today.

Waste 360: 4ocean pledges to pull two pounds of plastic waste from the ocean with each purchase of the jewelry set. How specifically will the company do this?

4ocean: We fund our cleanup efforts primarily through customer purchases of our products. This supports our full-time local crews that work every day to clean the ocean, rivers and coastlines in key locations around the globe. 4ocean’s one-pound promise is that for each product purchased, we will remove one pound of trash from the ocean. In the case of the jewelry set, it contains both a necklace and earrings so it funds the removal of two pounds (one for each product). Every time 4ocean’s professional cleanup crews head out on a mission, they document who is working, where they are going, what the target area looks like before it was cleaned, what the area looks like after they clean, how many pounds of trash was recovered in each bag of trash, and what day/time it was collected, in their 4ocean TrashTracker. This entire process is reviewed by the Better Business Bureau. To date, 4ocean has removed over 15 million pounds of trash from the ocean, rivers and coastlines.

Waste 360: How much waste do you hope to pull with this initiative?

4ocean: Each purchase helps to fuel this important work and we hope this new product category resonates with customers so it can continue to grow and we can expand our mission to remove as much ocean plastic waste as possible, and work to end this environmental crisis.

Waste 360: Why is this new collection focused on plastic waste in Hawaii?

4ocean: We recently expanded operations to Hawaii and are working with the local communities and organizations to identify the best way 4ocean can help combat the specific issues the plastic crisis is causing in this area, including microplastic pollution, commercial fishing, and powerful trade winds blowing trash onto Hawaii’s shores.

Waste 360: What future projects does 4ocean have planned?

4ocean: We recently partnered with Cariuma on a shoe collaboration utilizing recycled RPET and we are excited to continue expanding that partnership later this year. We are always looking for new ways to increase our impact, as well as new ways to repurpose the plastic waste we collect into useful, reusable items.