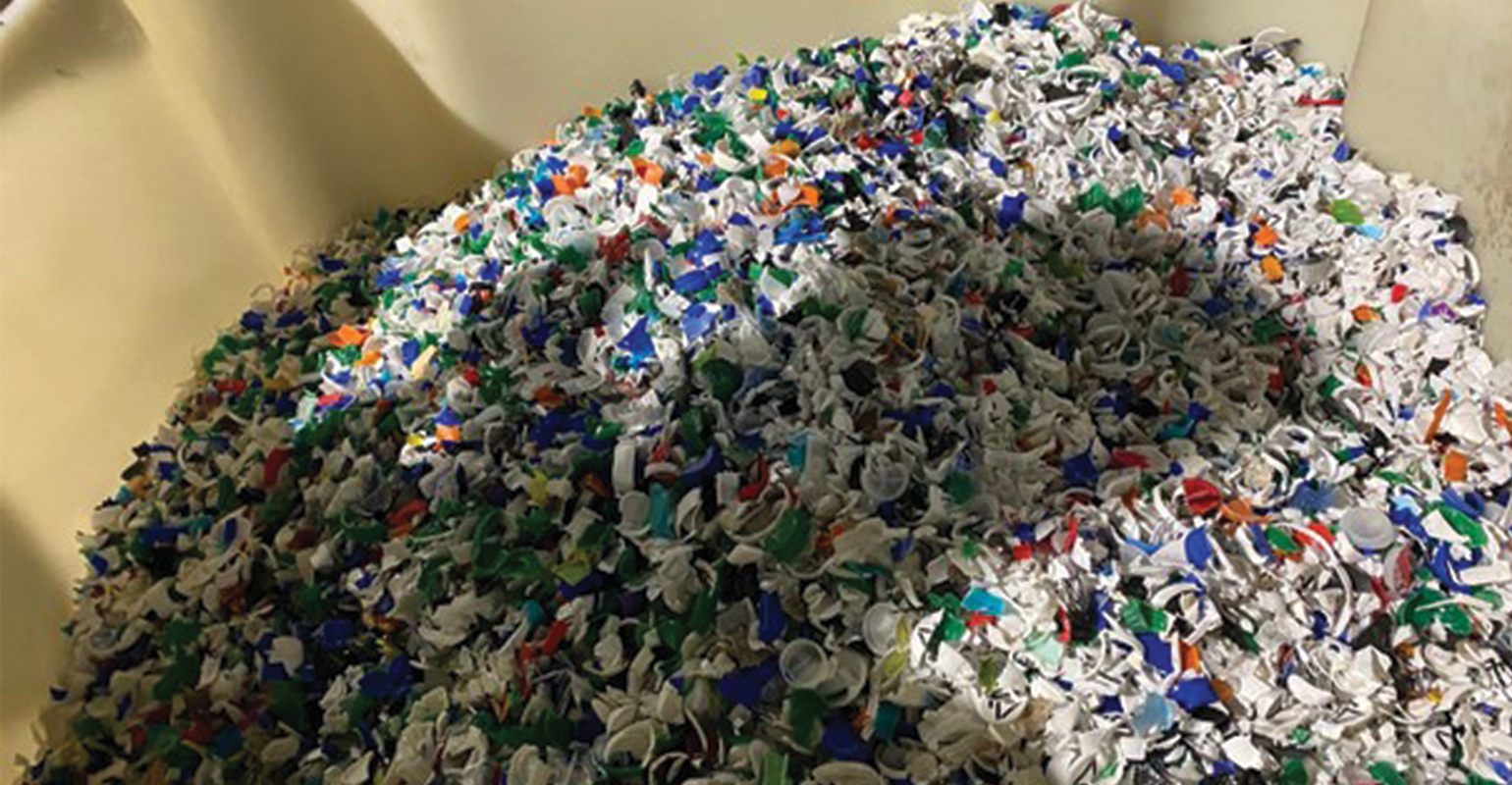 TYLER, Texas -- It's not the plastic water bottle that causes the most harm to sea birds, but the cap which is mistaken for food. A non-profit in Hawaii ensured that over 1.2 million plastic caps and lids will never get into the environment and harm sea birds by taking action to collect and recycle them. But this is no ordinary type of recycling which aims to turn a plastic product back into another plastic product with the addition of more plastic!

The plastic caps were delivered today to New Hope Energy where they were first shredded into smaller pieces and then converted into oil using new technology. B.E.A.C.H. had two volunteers who live in Texas observe the process as B.E.A.C.H. co-founders Suzanne Frazer and Dean Otsuki were unable to travel to Texas from Hawaii as planned due to covid-19. Eugene Royal, Special Projects Manager at New Hope Energy describes the plastic to oil conversion as "involving heating the plastic to a very high temperature and depriving it of oxygen".  He says that it does not involve any combustion or burning of the plastic. The oil produced is low in sulfur making it ideal for powering trains and ships. In this way, using plastic to make oil, rather than digging up pristine areas such as rainforests, the natural environment can be preserved.

It was very important to Beach Environmental Awareness Campaign Hawaii (B.E.A.C.H) which is a non-profit focused on bringing awareness and solutions to plastic marine debris, that this plastic was taken out of the waste stream for good and that 100% of the caps were recycled. It is not the norm for 100% of plastic to be recycled. Normally the recycling rate for plastic is only about 1-2% worldwide as usually it is not sorted well enough and there is contamination of the wrong types of plastic or non-plastic items. However, B.E.A.C.H. made sure that all of the caps sent to Tyler were able to be recycled by training people in how to recycle. This involved ensuring that the caps were cleaned, all stickers, seals and metal were removed and the caps were checked to ensure they were numbers 2, 4 or 5. B.E.A.C.H. involved school children across the island of O`ahu as well as volunteers with clubs, businesses and other community groups. More than 30 organizations took part in sorting and cleaning the caps with many more involved in collecting the caps from home, the work place and at outdoor events. B.E.A.C.H. is not receiving any payment or funds from the recycling of the caps.

The main purpose of the project was to raise awareness in the community of the harm that small plastic litter such as plastic caps cause to sea birds, particularly Laysan Albatrosses. Scientists (Hyrenbach, Hester, Young, Vanderlip) have found that one hundred percent of Laysan albatrosses studied in Hawai`i had ingested plastic.  About 250,000 baby albatrosses die each year with a stomach full of plastic. Suzanne Frazer, co-

founder of B.E.A.C.H. said "it's very tragic that all these birds are dying from ingesting plastic. The plastic ingested includes caps, toys, lighters, fishing floats and other items particularly if they red, yellow, orange, pink and purple in colour because it resembles their food – squid and fish eggs."  All participating groups were educated by Suzanne about the problem of sea birds ingesting plastic caps through powerpoint presentations. B.E.A.C.H. also found that plastic caps were one of the most littered items at beach parks and nearby where bottles were collected for recycling.  More information about this project can be found by visiting: http://www.b-e-a-c-h.org/recycling.html

This project would not have been possible without the generous help of sponsors. Matson, Union Pacific Railroad, Pacific Transfer, Loup and TRAC Intermodal all donated costs involved in transporting the caps. Matson provided free shipping from Hawaii to California and waived the container fee as well as helping at the last minute with a change from a 20 foot to a 40 foot shipping container when B.E.A.C.H. had too many caps to fit them all in the 20 foot. Keahi Birch, Matson's Manager of Environmental Affairs commented "As a leading ocean carrier serving some of the most pristine environments in the Pacific, Matson has always considered environmental stewardship a part of its business. So, when we were approached by B.E.A.C.H. to support this project, we jumped at the chance. Getting plastics out of the waste stream and out of our oceans is a monumental task and we all have to do our part."

Pacific Transfer helped reload the new container as well as truck the caps on the island of O`ahu. Shelley Choi, Director of Corporate Services at Pacific Transfer said "We are proud to play a part in support of B.E.A.C.H. and its efforts to raise awareness and educate our community and keiki of the detriments of plastic litter; and in its innovative charge to clean up and protect our island beaches, revered oceans, and local wildlife."

Mario Cordero, Executive Director of the Port of Long Beach where the container arrived by ship said "This innovative recycling project shows how the supply chain can bring people together to help the environment. The Port of Long Beach is pleased to be part of a partnership that found a way to both protect wildlife and conserve resources."

From the Port of Long Beach, the container was loaded onto a rail car and transported to Dallas aboard a Union Pacific train. "Union Pacific is committed to protecting the environment and proud to support B.E.A.C.H.'s community-driven effort by transporting its massive collection of plastic caps for recycling," said Jacque Bendon, Union Pacific Vice President - Industrial. "Railroads are one of the most environmentally-responsible freight transportation modes, making this partnership a natural fit for our team."

Loup, a Union Pacific subsidiary, arranged the shipping container's delivery via truck from Dallas to New Hope Energy in Tyler, Texas and TRAC Intermodal assisted through waiving chassis fees.  Dan Walsh, CEO of TRAC Intermodal said "We are honored to support this B.E.A.C.H project and its eco-friendly solutions for the ocean and coastal environment. We hope our involvement will bring about new opportunities to protect wildlife and push towards a new era of sustainability."