Corrugated boxes are named for the fluted inner layer that is sandwiched between layers of linerboard. Corrugated boxes need to be impact, drop, and vibration-damage resistant, while still being light enough to ship products. Corrugated packaging is the largest segment of the packaging industry, with about 1500 manufacturing plants in the United States and Canada.

The extensive use of corrugated boxes in the American economy makes them the biggest manufactured product in the waste stream by weight. Fortunately, OCC is easily recyclable, which also makes it the most recycled product by weight and greatly diminishes the amount sent to disposal. Since 1960, OCC generation increased by 302 percent; its MSW market share increased by 42 percent; its recycling rate increased by 164 percent and its disposal share decreased by 72 percent. Corrugated box production has benefitted from the rise in on-line shopping due to the need for more small shipping boxes for those shipments than the much larger boxes that would be used to ship products to brick and mortar stores.

While some corrugated boxes are made of plastic, this profile is limited to paper boxes. 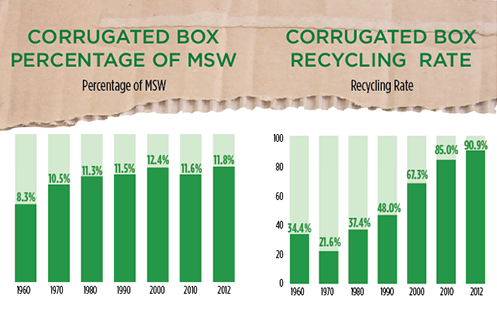 Municipal Solid Waste Generation, Recycling, and Disposal in the United States: Facts and Figures for 2012, USEPA, Office of Solid Waste, 2014