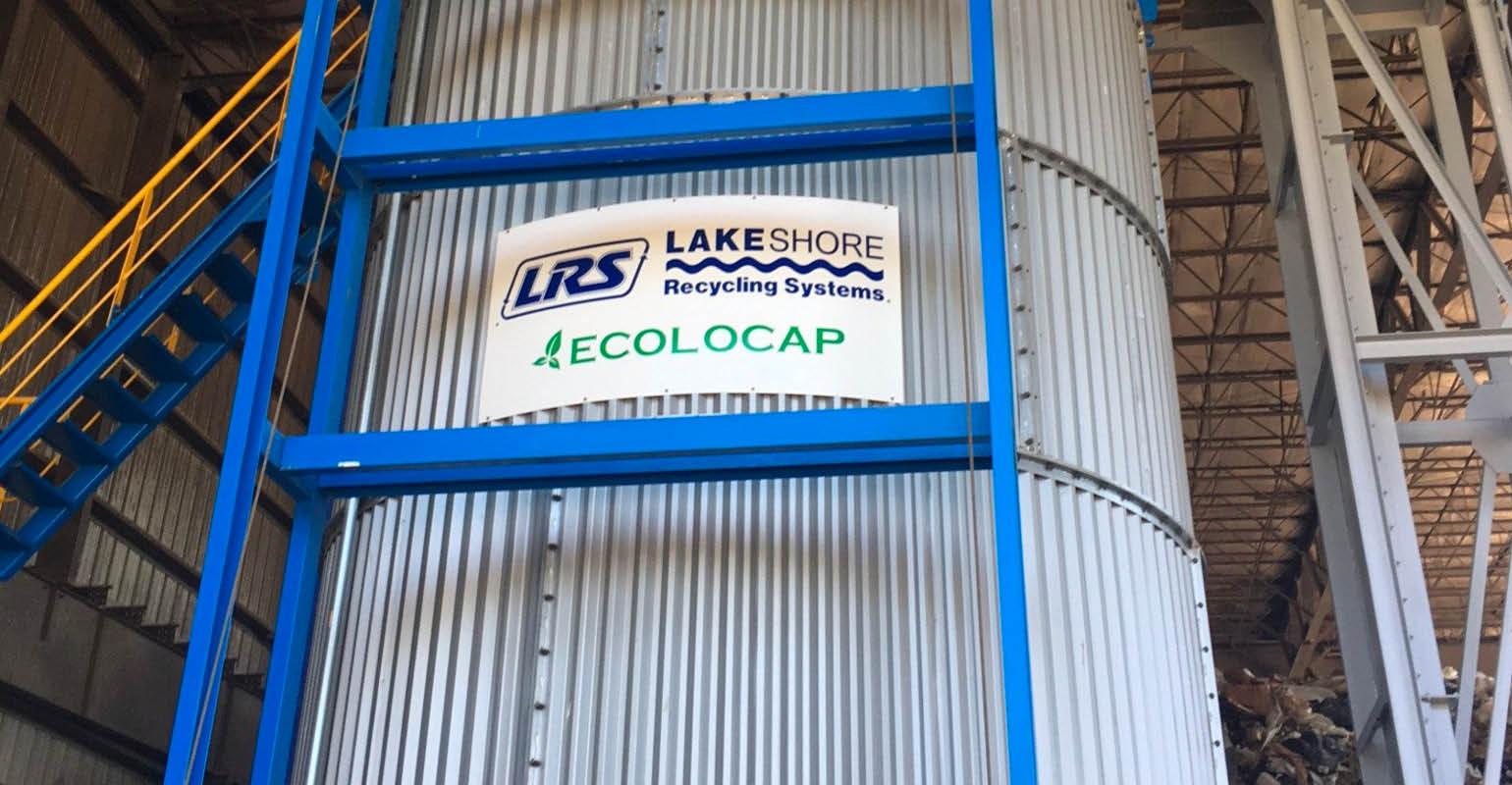 While digesters are typically anaerobic, in this case oxygen is pumped into the organic matter.

Lakeshore Recycling Systems has launched an aerobic digester in Chicago, enabling the facility to take in 15 tons of organic waste a day that is processed into three tons of fertilizer within seven days. If the technology proves out over a three-month pilot, Lakeshore’s plan is to install eight more systems at its other Chicago facilities.

Called the Ecos/Bio-ART, the system developed by Morton Grove, Ill.-based EcoloCap, is an in-vessel aerobic digester that uses biological fermentation. It functions as a traditional composter, but the unit is called a digester because of the in-vessel circular silo. The difference being that while digesters are typically anaerobic, in this case oxygen is pumped into the organic matter.

“We chose this system versus others because we got to test a version on a smaller scale in the basement of our MRF where the digester is now located,” says Rich Golf, managing partner at Lakeshore Recycling. “We put in fresh produce and within one week [90 tons of organic waste] turned into what they said it would—18 tons of fertilizer. There is no smell and no odors,”

Golf says most of the alternatives the company explored were larger compost operations that required more space and that could face odor issues. Morever, because the Ecos/Bio-ART system requires no water or sewage connection, leachate should not be an issue.

The company’s customers are primarily Chicago-area food distributors, restaurants, hotels and schools that send scraps to the facility.

EcoloCap will sell the fertilizer and share profits with Lakeshore during a three-month trial, and receive some of the tipping fees.

The demand for this organic product is there, says Golf, adding, “I wish we could make more.” Pending outcome of the trial, the goal is to install additional units to process a total of 120 tons of organic waste a day.

Ecos/Bio-ART can process meats, fats and oils that may not be compostable, but it is leveraged to process fruits and vegetables only to keep the product as consistent as possible, says Kevin Marks, director of business development, EcoloCap.

For now, Lakeshore is learning the process; how to feed the system and at what speed; how much produce to put in; and how much sawdust and beermash to use, which are materials needed to start the system.

“I thought we may have more pushback from the city or state; that it would be hard to get permitting. But we’ve seen the opposite,” he says of what turned out to be a four-month process. “The city had a few questions about the air emissions coming out of the building, but it was pretty straightforward.”

The technology’s features include a means to track weight and to monitor temperature. Tracking input by weight helps guide the input schedule, and the computer-controlled temperature gauge within the vessel ensures the proper temperature to rapidly grow the fermentation bacteria that processes the organics.

EcoloCap says it is selling the system to Chicago landscape companies and golf courses as well as giving a few units away for testing. It’s in negotiations with one national landscape and fertilizer chain that it can’t name yet.

As the company tries to penetrate the U.S. market, this system is operating in Asia, with over 400 units running in Korea and an additional 50 units in construction in that country.

“EcoloCap put up the capital for this first operation [in the U.S.] as we wanted to make an impact domestically on par to the impact we’ve had overseas,” Marks says. “We couldn’t be happier with the partnership we’ve formed with Lakeshore Recycling Systems and the opportunities it will bring to both of our companies.”

Domestically, some meat producers, zoological societies and other waste companies are in stages of finalizing installations, he adds.

“Being the first in the U.S. to install this system, Lakeshore is an innovator, and now other companies are following suit because they see environmental and monetary benefits,” says James Kwak, CEO and president of EcoloCap.

Lakeshore is optimistic, based on initial results, and believes the facility’s proximity to the city will serve it well in the food waste niche.

“Being within five to 10 miles of Chicago means trucks don’t travel far along designated routes and some third-party customers can bring their food waste in,” says Golf.