Regional Landfill Capacity Problems Do Not Equate to a National Shortage

Across the country, landfills are closing and local leaders protest the opening of new facilities. Yet Americans are still generating several pounds of trash per person each day and it has to go somewhere.

But rumors that the U.S. is running out of landfill space are a myth, according to industry leaders.

Just a few decades ago, almost every town had its own dump, and the U.S. Environmental Protection Agency (EPA) estimates there are more than 10,000 old municipal landfills. All that changed in the 1970s, when the federal government began requiring landfills to install lining systems to prevent leachate from leaking outside the landfill. Today, while the number of landfills has shrunk from more than 7,600 in the mid-1980s to roughly 1,900 as of 2013, operating landfills are much larger and more efficient than their predecessors.

At the national level, the EPA reported that landfill capacity is “sufficient for our current disposal practices,” but there are some regions that are becoming more limited in their disposal options.

Rather than landfill waste locally, some areas of the country are exporting their garbage to other cities, counties, and even states. For example, following the closure of Fresh Kills landfill on Staten Island, New York City began sending some of its trash to landfills in Ohio, Pennsylvania, West Virginia and elsewhere. 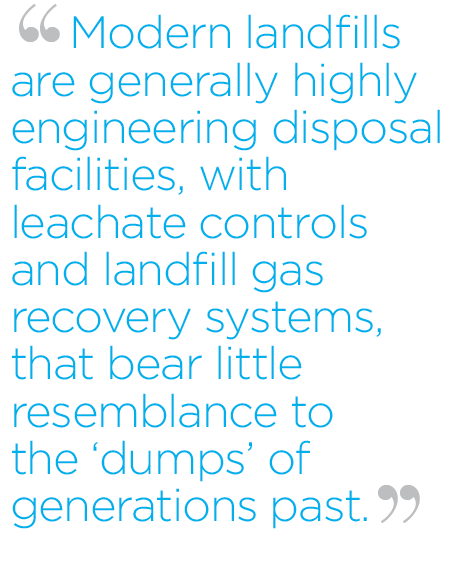 Seven states are looking at running out of landfill space in the next five years, one state will reach capacity in five to 10 years and three states have 11 to 20 years to go. But 22 states have available landfill space for decades to come, Staley says. Nationally, Staley says he estimates that the U.S. has about 62 years of landfill capacity remaining in its current facilities.

Estimates of landfill capacity depend on assumptions about incoming waste volumes, waste composition, and waste diversion practices—and all of these factors are always evolving, Staley says.

“Despite the reduction in the number of landfills in the United States following the enactment of the RCRA Subtitle D regulations, there has been an increase in overall disposal capacity, as larger regional landfills have opened in many locations that receive waste from a variety of locations,” Biderman says. “ Many states have more than 20 years of permitted landfill capacity available. Modern landfills are generally highly engineering disposal facilities, with leachate controls and landfill gas recovery systems, that bear little resemblance to the ‘dumps’ of generations past.”

Waste in today’s landfills is also more densely compacted, and some landfills add liquids that hasten the decomposition process and add more time to the life of the landfill.

Also, while the U.S. population is growing, Biderman says the amount of a waste disposed in landfills has dropped more than 7 percent since its peak in 2000 thanks to increased recycling and diversion practices.

Biderman expects that diversion—especially of organics—will continue to grow and further reduce the amount of waste headed to landfills.

“This is likely to prevent regional landfill capacity shortages in the Northeast U.S., where landfill space is somewhat more limited than in other parts of the country, and where many of the country’s waste-to-energy facilities are located,” Biderman says.