Meet Mr. Trash Wheel, the googly-eyed hauler that will make you smile. We thought now is the perfect time for a lighthearted success story.

In this week’s episode of NothingWasted! Podcast, we talked with the masterminds behind Mr. Trash Wheel—John Kellett, founder, Clearwater Mills, and Adam Lindquist, director of Healthy Harbor Initiative, Waterfront Partnership of Baltimore.

Kellett is the inventor of Mr. Trash Wheel, a water-driven trash interceptor and collection machine located on Baltimore’s Inner Harbor—and Lindquist’s organization helped him to fund and implement it.

We spoke with them about turning a “cocktail napkin idea” into a reality, the power of simple design and more!

Here’s a sneak peek into the discussion:

Waste360: Can you tell us what powers Mr. Trash Wheel?

John Kellett: The trash wheel works on all renewable energy. The water wheel is its engine really, and it gets its power from two sources. When the river is flowing, the current turns the wheel and provides mechanical power, which pushes and lifts the trash out of the water and into a dumpster. But, a lot of times, the power of the river isn’t enough—so we supplement with solar-powered electric pumps.

Adam Lindquist: To John’s credit, it’s an incredibly simple but effective design. In some ways, the simplicity is why it has worked so well for going on six years now.

Waste360: Success breeds more success ... so how many Mr. Trash Wheels have you deployed now?

John Kellett: Well, there’s only one Mr. Trash Wheel—but he’s been joined by Professor Trash Wheel and Captain Trash Wheel, and we have a yet-to-be-named fourth one planned for the Inner Harbor. We’re also working on one in Panama. Each one has its own personality and location that it works in.

Waste360: I imagine many cities are calling you guys to help them figure out their own waterway trash issues?

Adam Lindquist: Almost every week, I hear from very well-intentioned people who get in touch saying, "I have to get a trash wheel in my city," but they haven’t fully thought through what it means to intercept trash. Once you collect the trash, then you own it—and you’re responsible for it.

Take a look at just how effective Mr. Trash Wheel and his cousins have been in the last six years. HINT: They have been extremely busy! 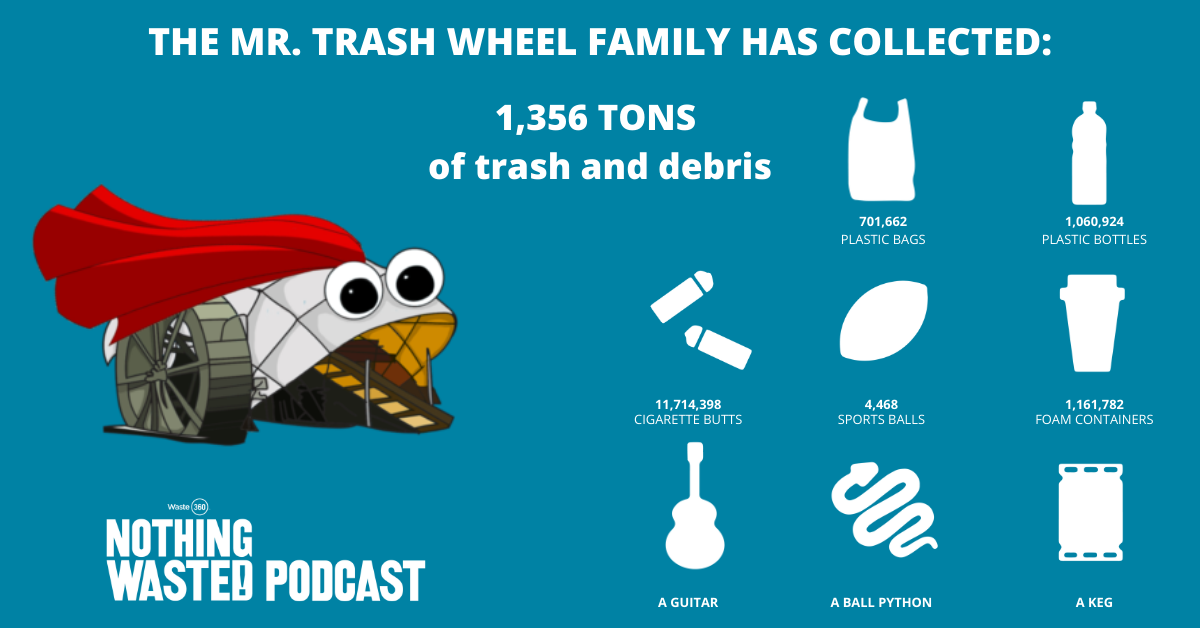 Listen to the full interview below and more episodes here. Read the transcript here.