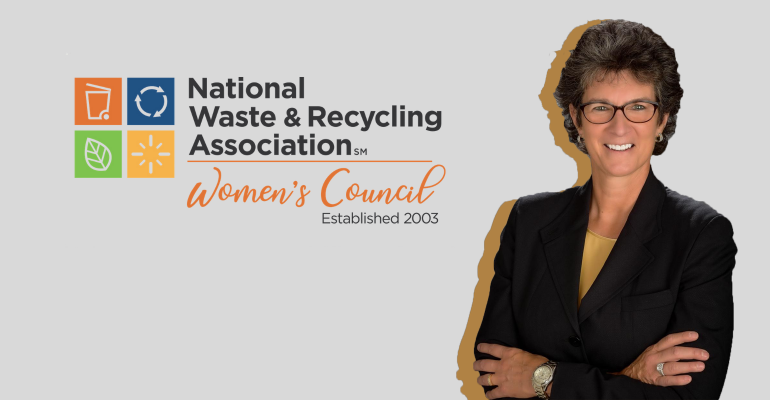 After working for UPS for 30 years, Cindy Miller decided it was time for a new challenge, so she joined Stericycle where she was named CEO in 2019. Little did she know that only a year later she’d be guiding the company through the challenges of a global health pandemic. But with her leadership style and wealth of knowledge, Miller and her team took the challenges head on.

At the on set of the pandemic, Miller said  one of three things would happen to companies: they wouldn’t make it through; they’d make it through but some of them would come out the other end not as strong; and then other companies would use it as an opportunity to be a catalyst to drive meaningful change for their future.

“And I would say, we’ve come out of it in the third bucket. We have repositioned ourselves; we’ve used it as a catalyst to really drive change. We’ve gotten innovative during the pandemic, I think from a trial perspective, I’m extremely pleased that we’ve launched new services during a time when everybody’s wondering, how’s the company going to make it ‘til tomorrow,” said Miller.

“I think the triumph has been with all of our frontline essential workers. I like to say that we help hold up the healthcare network on our regulated waste side. Everybody thinks about what happens when you go into a hospital or a doctor’s office… but, if everything backed up and we just allowed all the infectious things that we handle to build up, we put all of that at risk. It’s at risk for our customers. So for us to really help be the backbone of the healthcare network, in the manner in which it was required, certainly during this pandemic, but in past outbreaks of things, I think I’m most proud of the work that our frontline workers do,” she said. “But I think being able to adapt to the change certainly presents a lot of challenges for everybody. But, I’m also proud of how everybody stepped up within the company to make sure that we continue to grow our future.”

Stericycle’s tagline, “we protect what matters” is really the core of the company’s culture, she said.

“We take that very seriously. It means, when you talk about the beginning of the business (Stericycle was formed in 1989) it was the late 80s with the AIDS scare, needles washing up on beach fronts. Protecting certainly the environment, protecting community, protecting each other, protecting patients that end up in hospitals, protecting data from not getting into inappropriate hands – we take that whole protection -- protecting what matters -- very seriously. And, I see us continuing with that push as we continue to get innovative and continue to partner with healthcare systems and with business owners around the globe in helping protect what matters to them,” said Miller.

Fast forward 30 years and Stericycle continues to protect what matters by being part of the COVID-19 vaccine rollout. The supply chain is set up to get the product to its destination whether its hospitals or pharmacies and it’s Stericycle’s responsibility to make sure that once the product is used in its proper usage, there’s not other potential contamination, said Miller.

“We follow all the standards from a regulated waste perspective and then successfully and compliantly make sure that all of that other potential waste is taken care of accordingly to ‘protect what matters,’” she said.

Miller also described how Stericycle responds to “excursions,” where if a trailer is supposed to keep a vaccine at a certain temperature and for whatever reason it can’t keep the temperature to where it’s supposed to be it then makes the product not valid so Stericycle comes in and handles it according to regulated waste rules and regulations.

“I think our challenges have been exhilarating for our team, figuring out how to keep up with all the infusion of all the doses of medicine and play our part in the reverse logistics of handling it properly. It’s been amazing times right now and it’s busy times, but I know the team is really pumped up about the important role we play and it’s exciting to be part of,” said Miller.

“This vaccine rollout is probably one of our greatest endeavors in recent memory, and plays such an important role with government agencies, with our large customers like the pharmaceutical companies, the hospitals. To be in the forefront and to be helping guide and give counsel and advice and then set up the plan, execute those plans to keep the system up and running and do our part. There’s an awful lot that we are contributing and bringing value. And the fact that it’s on a global scale – you know the world is going through this at the same time – and to be part of that is just a special time,” she said.

Miller’s rise to CEO of Stericycle comes after a 30-year-career with UPS where she started as a driver and worked her way up to supervisor then manager then president of a couple business units and finally leading all the European operations for UPS.

“I can remember being a driver and then someone had approached me and asked, ‘Cindy, would you like to go into management?’ And at the time, you know, when you’re a struggling young person, my real only focus was, does it pay more than the job I’m currently doing? And I think the manager had laughed and said yes, it does, and I said, okay, doesn’t matter what it is I’ll take the job,” she said. “You know as you’re struggling to make your rent payments or your car payment, you’re really focused on paying the bills and being an independent and productive citizen. So, I got into supervision and most of my career was in operations.”

During her time working in operations, Miller learned early on that communication and transparency help with overcoming challenging situations.

“You have to be able to make the complex things simple. For the frontline folks, managers and all the folks that actually have to do something, because if it’s left in this complex space, its academic space, it can seem overwhelming sometimes and I think I’ve had challenges before where I’ve had to boil things down to its simplest parts and communicate them and really roll up my sleeves and get with preparing to help,” she said.

“And I think all of those things have prepared me for this time, and especially with everybody now being remote – that’s just another layer of complexity,” she said. “I think I’ve had many experiences in my past that helped prepare me for today and I’ve been very fortunate for that.”

When Miller looks back as to why she left her position at UPS she said she really wanted the opportunity to make a difference and come to a smaller company and actually be a disrupting force to help unlock and unleash some of its potential that might have been otherwise dormant.

Miller said one way she’s been a disrupter was centralizing the process, standardizing procedures and leveraging synergy within Stericycle.

“As a company, it’s a patchwork of more than 500 different acquisitions. And in many ways, the strategy was to allow all those 500 to continue to act independently and when you grow to the size that we are and the company had grown to, there’s a point where you have to centralize your process, standardize your procedures, and leverage synergies which you can get from being a whole lot more like each other than allowing everything to be separate. And having spent 30 years in a behemoth company that was all about pulling synergies from working together, it really was a great platform for me to want to be the disrupter within Stericycle, to change from within so that we can better adapt to what our customers needed for us,” she said.

As for future goals for Stericycle, Miller said they like to talk about “S3G” which stands for safety, service, savings and growth.

“At the core of what we do, we’ve got to be safe and compliant – that goes without saying. We’re in a highly regulated industry on both the regulated waste and the care-based destruction side. So, for us, working safely and working compliantly – that’s every day, that’s what we do. Then service. You’re only as good as what your customers say you are. No matter how good companies think of their services in their mind, you’re only as good and as valuable as your customer base says you are, so service is certainly the utmost importance,” said Miller.

“Then savings. I think every day that constructively dissatisfied comes into play – can I do something more efficiently? Could I have done something better than we did yesterday? – that anytime you do that, you really push the company forward to become more efficient and that helps drive some savings,” she said.

When it comes to personal growth, Miller attributes some of her success to saying “yes” to new opportunities more than saying no.

“I can’t tell you how many jobs that I was offered that I may not have known anything about or I may not have felt as if I ever finished the last job that I just did but I realized that people saw an ability to learn and then an ability for me to dig in and strive to be better. They were investing in my career by giving me those challenges,” said Miller.

Miller recalls when she was asked if she was interested in being a manager with UPS, she was the fourth person they had asked but because she said yes, it launched her to even greater opportunities at the company.

“So, I think you have to say yes more often than you say no. I think that’s the best advice I can give,” to someone starting out in their career, she said.