Riding Out Recycling’s Down Cycle

It’s no secret that recycling has slumped. Commodity prices are down and communities face fees for a service they had assumed should be free. However, industry experts say to have faith in the cycle, and to keep pushing forward by upgrading, when possible, to efficient and clean technologies.

Similarly, CP Group designed and manufactured the equipment for the 110,000-sq.-ft. Southern Nevada Recycling Center in Las Vegas, which opened late last year. It is capable of processing two million pounds of recyclable material per day, or 70 tons per hour, and is expected to double recycling capacity in the area. Overall, the facility will have the capacity to process 265,000 tons on an annual basis. The previous facility, in contrast, had about 130,000 tons of material come through in 2014, of which 90,000 was processed. 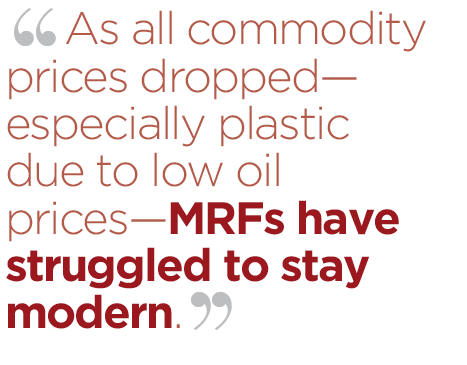 ​Hawn says it’s been difficult for some firms to adjust from the former industry standard, recovering strictly paper, which was able to be processed at a much higher speed. Adding multiple streams drags further on the amount processed per hour, which, of course, results in less money at the back end. As all commodity prices dropped—especially plastic due to low oil prices—MRFs have struggled to stay modern.

“Right now in the environment they find themselves in, a Band-Aid of a retrofit, as opposed to a brand new system with the most recent technology, may be a MRF’s best solution,” Hawn says. “If they’re only doing about 20 tons per hour now, a low-cost upgrade could take them to 25 tons per hour, and that may be efficiency enough to stay afloat.”

Making money in recycling has definitely become a catch-22, says Brad Kelley, senior project engineer at Fairfax, Va.-based Gershman, Brickner & Bratton Inc. Basically, it takes money to save money, as the cost of an upgrade is difficult to raise, but a cleaner product would sell better, he says.

“If the firms can install the new tech, such as optical scanners and better residue cleaning systems, it becomes worth it, because instead of, say, paying $15 per ton to move the material you’re getting $5 per ton, that’s a $20 shift. But it takes the capital to pay for it,” he says.

Though it’s not popular, Kelley says it might be necessary for haulers to convince communities that the recycling just isn’t always free, especially when commodity cycles are low. Eventually, the cycle will return, and recycling across the globe is just not going away. The U.S. attitude just may need to face the realities of the costs of recycling at low times, he says.

“It also comes down to cooperation among all the entities involved, from the people who are throwing things away to those collecting it, and even to those who are buying it,” Kelley says. “Recycling’s not dead, there’s still demand out there, there’s certainly capacity out there. Though moving prices hurt everyone, it takes firms putting in enough investment to ensure they’re clean enough and efficient to reach some level of profitability as we wait this out.”

Meg Morris, vice president of materials management and community affairs at energy-to-waste firm Covanta, says the “recycling is dead” mantra is a myth. While her firm handles non-recyclables, they share a common enemy. Landfills, where everything ends up without commitments to sustainability, emit more than 170 pollutants into the air, and are likely one of the most significant causes of climate change, she says. Plus, Morris says, recyclables that end up at her plants are a dangerous annoyance. “Plastics burn too hot, and glass just causes a mess,” she says.

Together, reusing materials and converting the rest to energy is a sustainable solution that can keep the earth green, and in the long run, is the less expensive solution, she says.

“Can you imagine how hard it would be to get people to start recycling again if we told them to stop for a while for the cycle to reset?” asked Morris. “It’s something we’ve adapted to, and it would be hard to change behaviors back and forth. We need to do a better job at explaining how much we’re saving, that we don’t need to waste as much water or mine more materials, by reusing what we’ve got.”