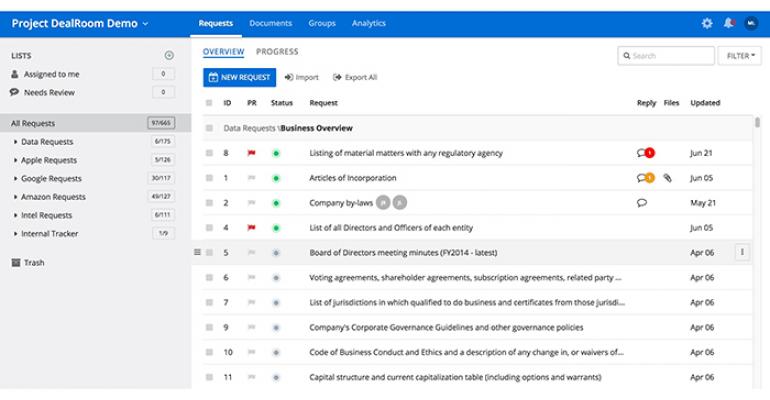 Technology can help companies manage the due diligence process in an organized, smart way.

The waste management industry and the industrials sector overall are both competitive areas right now. The deal-making environment is currently favorable for transactions in the waste sector specifically.

The 2017 tax cuts meant a reduction in the corporate tax rate from 35 percent to 21 percent, according to David Biderman, executive director and CEO of the Solid Waste Association of North America (SWANA) based in Silver Spring, Md.

“This means more after-tax income, which means buyers are willing to pay a little more for quality assets. This means valuations have increased. Also, the tax cuts have provided a boost to the economy, which means more waste generation and disposal, which provides an additional tailwind for transactions,” he says. “I have been in the industry for more than 20 years, and we could see some of the most significant acquisition activity over the next two years … since the 1990s, when USA Waste bought Waste Management and Allied Waste bought BFI.”

With the anticipation of a significant increase in mergers and acquisitions (M&A) in the coming months, there also is more pressure to be efficient in deal-making, pressuring companies to utilize technology and software platforms to manage the due diligence process.

Kison Patel, CEO and founder of DealRoom, a Day1 company based in Chicago, says waste management companies are using technology and new project management techniques to manage the due diligence process in an organized, smart way so that they can focus on what really matters—running their business.

“Platforms like DealRoom were created by M&A professionals to address the issues that they found in running their own deals. These smart systems centralize communication, organize documents, facilitate collaboration and streamline the process for a frequently multi-party process,” he says. “These features help minimize distractions, reduce duplicate requests and demands and allow company owners to be confident knowing that their process is being managed in an organized way, so that they can still focus on running a company.”

Founded in 2012, DealRoom is a technology platform that was created to solve problems that occurred in the M&A process.

As a multi-party project management software, DealRoom aims to reduce work, tracks M&A progress and provides analytics. It tracks every part of due diligence from start to finish. Data storage, diligence tracking and communication tools are all on one integrated platform.

The methodology used in buying and selling a company has a huge impact upon how the deal turns out. If the correct methodology is used, this can save a lot of headaches and frustration, and the process can be completed faster, according to Patel.

“Compressed timelines and quick turnarounds can add pressure to an already high-stress situation. The key to managing these deadlines and demands is organization,” he says. “Organizing information and documents makes them easily accessible. Also, answering requests with an established process, such as one established by using a platform that is designed to streamline and simplify the due diligence process, makes complying with deadlines easier. Having an established process in place can also help minimize distractions and allow you to still maintain the ability to run your business.”

Once the acquisition is complete, waste companies must remain diligent in the execution of the post-merger integration phase. Several common problems can occur. The methodology, or lack of a formal methodology in place to help support integration after the merger, can be a big problem.

“Establishing a formal methodology is important to ensure that integration is a continuous process and it runs smoothly after the deal closes,” says Patel. “Problems that occur include a lack of communication between teams, technology adoption that is chaotic or disorganized and a lack of focus on merging the two company cultures into a unified, singular company culture. Many of these problems can be solved by having a solid integration plan, as well as a change management process and plan.”

Biderman says that often the cultures of the acquiring and selling companies are very different and require substantial attention from the acquiring company.