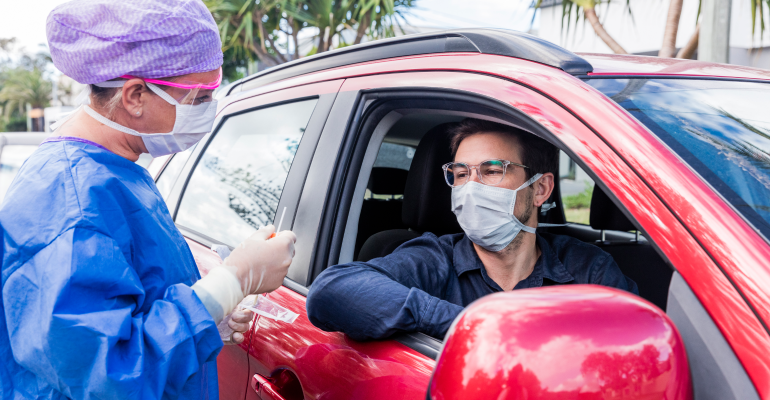 For years, Sterilis Solutions has sold its portable biohazardous medical waste treatment units to health care facilities, enabling them to process sharps and red bag waste onsite and dispose of residuals in the regular trash. But during the current COVID-19 pandemic, the Chicago-based company is pitching an expanded application of its processor: mobile units.

The town of Sandwich in Massachusetts is helping Sterilis take this new concept for a test run. The tweaked processor will be installed in an ambulance that Sandwich donated toSterilis. The ambulance will be retrofitted to do testing and then treat biohazardous waste in an emergency vehicle.

Sandwich recently piloted a unit in a trailer set up as a temporary site to do COVID-19 testing. The ambulance version is the next evolution of the mobile concept. 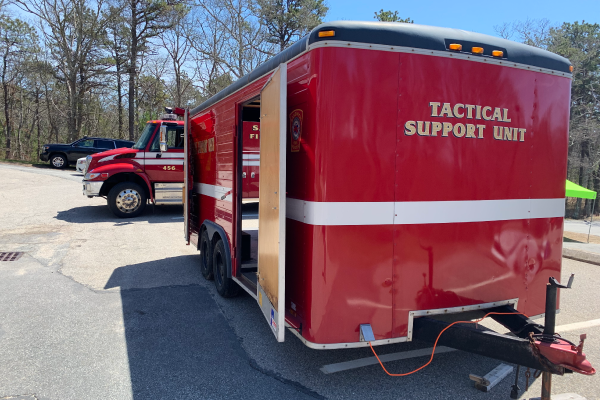 The New England town’s fire department was an early adopter of the first Sterilis machine back in 2014, utilizing it at the fire station to process sharps and other regulated medical waste at a public drop-off site set up there. It has been a way to keep the station safer than if the department had to store material while waiting for a weekly medical waste pickup.

“More recently, we started looking at homebound folks needing care and thought it was better to test in their homes, which would necessitate a need for a mobile waste processing unit,” says Sandwich fire chief John Burke. “We decided we would use an old ambulance as a mock-up truck and put Sterilis’ machine in the back of it to do point-of-care testing. Then we can remediate waste as we are driving from one location to another.”

The original core product, called the Model 3000, is an autoclave steam sterilization and grinding system. The steam process heats the contents of the unit to a temperature of 136 degrees Celsius for 20 minutes to sterilize the material, which is then ground down to reduce its volume. The unit is on caster wheels and is comparable in size to a small office copier.

“We designed it to be able to move from room to room, for instance at a surgery center,” says Tony Batalha, Sterilis’s chief operating officer. “Then we started to ask ourselves, why can’t it be portable from facility to facility? And in this case, why can’t it be used along an ambulance’s route? So we are mobilizing the system and designing it to be able to power the unit without an outside power source.”

Burke is hoping to go house to house, not only to test for COVID-19 or the flu but to allow health care providers to do vaccinations and flu and COVID testing in a mobile unit and be able to remediate used sharps and testing materials onsite in real time. 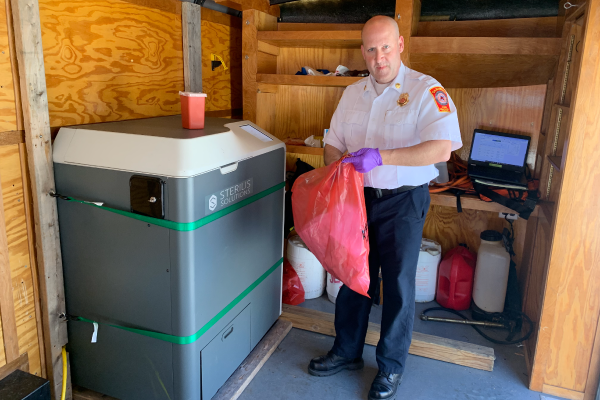 The mobile setup might also be an additional option to the drop-off site at the fire station for some people, Burke speculates.

“We found that not only could we control waste well in the station, but we could do the same in the trailer,” Burke says. “So we asked, in the future might we go house to house and grab this waste instead of having people come to the station to drop it off?”

Recalling what happened during an Ebola outbreak several years ago, Batalha speculates that COVID-19 will likely create a need for these units.

“When Ebola broke out, Sterilis’s medical waste processors were brought into quarantined areas where patients were treated,” Batalha says. “At that time, the system was used to help mitigate the spread of disease. Today with COVID-19 the same approach can be applied where waste can be remediated in these quarantined areas and then transported for disposal. So the potential to spread infection onsite or as waste is hauled is mitigated.”

The existing commercialized system takes up to a 3-gallon sharps container and up to 20 pounds of red bag material like gauze, nitro gloves, personal protective equipment, and cotton swabs. Software communicates with a portal that has a wireless or ethernet connection to the processor. The portal, accessible through mobile apps and laptops, manages all manifests to log data that must be reported to the Occupational Safety and Health Administration and other regulatory agencies.

Barbara Plansinis, an administrator for Wentworth Surgery Center in Somersworth, N.H., has observed the system’s performance firsthand in her work.

“It creates little waste compared to having to box it and send it out, and the cost is significantly less than what we were paying for our previous service,” Plansinis says. “In fact, we have seen a cost reduction of about 25%.”

As Sterilis works on a mobile unit through the COVID-19 pandemic, Batalha sees a growing list of potential users.

“For example, if you are a municipality looking for a way to bring the community back to work, you can drive a mobile unit to do testing and screening of employees, whether teachers at school or office workers at their buildings,” he says.

For now, for the town of Sandwich, this mobile concept is something to try and prove out to demonstrate that the system could work in the town’s community wellness efforts.