Taking Stock of the Current State of Waste & Recycling 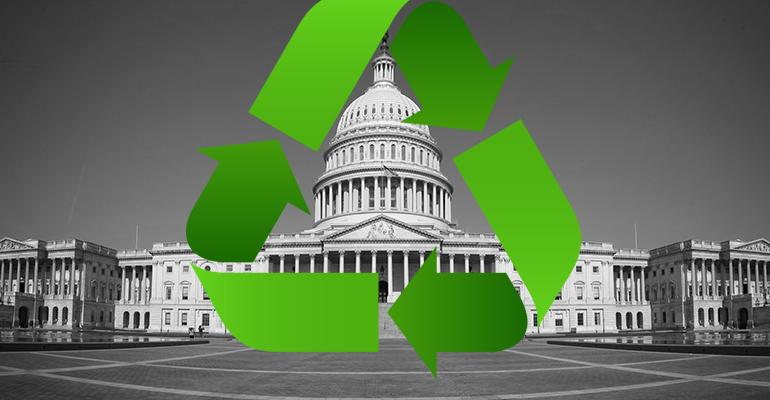 What the current state of the industry and overall political climate might mean for waste and recycling legislation and regulation.

Recycling markets remain one of the industry’s biggest concerns. Throughout most of 2016, they remained flat or declined, increasing financial pressure on curbside collection programs. In spite of all of the angst over weak markets, collection and processing companies and local governments renegotiated contracts in an attempt to more evenly share the risk of fluctuating markets. Virtually no curbside programs closed shop. Even better, markets for most recyclables had an unusual uptick at the end of the year. Let’s hope this trend continues.

In California, however, several hundred recycling centers closed. These closures were caused by weak markets and by the workings of California’s unique container deposit law. Even if markets strengthen, fixing that law will be a top priority for California lawmakers in 2017.

Legislatively, 2016 saw fewer solid waste and recycling bills introduced and then enacted. This continues a trend that has been going on for the last decade. For the most part, new legislation fixes specific problems—such as the states that have passed Slow Down to Go Around laws that protect waste and waste recycling collectors when they are out of the truck picking up containers. Because solid waste is not a “crisis” area, I expect that most bills introduced in 2017 will focus on fixes to existing laws, not top-to-bottom revision of those laws.

No major organics bills passed in 2016. Nonetheless, the release of the ReFED report sparked increased interest in how to best manage our organics waste stream. Improved date labeling is one of the easiest and most effective ways to decrease food waste. A bill was introduced on the Hill to standardize date labeling on food packages. This legislation has a strong chance of passing in the new Congress. It is a bipartisan approach that has substantial support among industry and the environmental community. In addition, the U.S. Department of Agriculture recently came out in support of “best if used by” date labels. Look for successful legislation in this area in Congress.

Extended producer responsibility legislation continues to stall. Few of these laws have been enacted in the past five years. Even attempts to improve flawed electronics laws have failed to pass in most states. This paralysis will continue until all the parties involved can agree on a more effective way to manage electronics recovery. On the packaging front, Connecticut created a task force to study how to increase packaging recycling, including the potential for extended producer responsibility. Their report is due early this year, however, the task force hasn’t met yet because one position remains unfilled. The most likely outcome is a delay in the report’s due date.

What about our raw materials? We will see continued lightweighting of packages and a continued decline in the use of printed paper, which means that municipal solid waste generation is likely to remain flat. We will also see more use of flexible packages. While these packages normally have a greener footprint than their competitors, they are not recyclable. A technological breakthrough in the recyclability of flexible packages for dry products was announced last year. I don’t know, however, of any processing facilities that are capable of handling them. This will change over time, especially if strong markets arise for those recycled packages and any needed changes to the processing line are minimal.

The increase in housing starts over the last year is likely to continue in 2017. Look for increased construction and demolition debris as a result.

Sustainable materials management will continue to receive attention at the state and federal level. This is a relatively new approach, first launched by EPA in 2009. It stresses the overall life cycle impact of a product as the most importance aspect in managing it from cradle to grave. Oregon added sustainable materials management to its solid waste law and is in the process of implementing it statewide. This next year could see more states adopting this approach.

Finally, what does my crystal ball predict from the new administration? Given that solid waste and recycling were totally ignored in the campaign, my ball is pretty murky. I have two thoughts, however. The first concerns trade policy. A substantial portion of our recyclables are exported to overseas markets. Any attempts to rein in free trade will have a negative impact on those markets and an unintended negative impact on recycling.

The second issue is enforcement policy concerning solid waste management facilities. We are a regulated industry with landfill and air pollution regulations that guarantee that public health is protected. While I do not expect the new administration to stop enforcement of those laws, any attempt to ratchet down enforcement will not be good for the environment or for this industry.

Chaz Miller is director of policy/advocacy for the National Waste & Recycling Association.