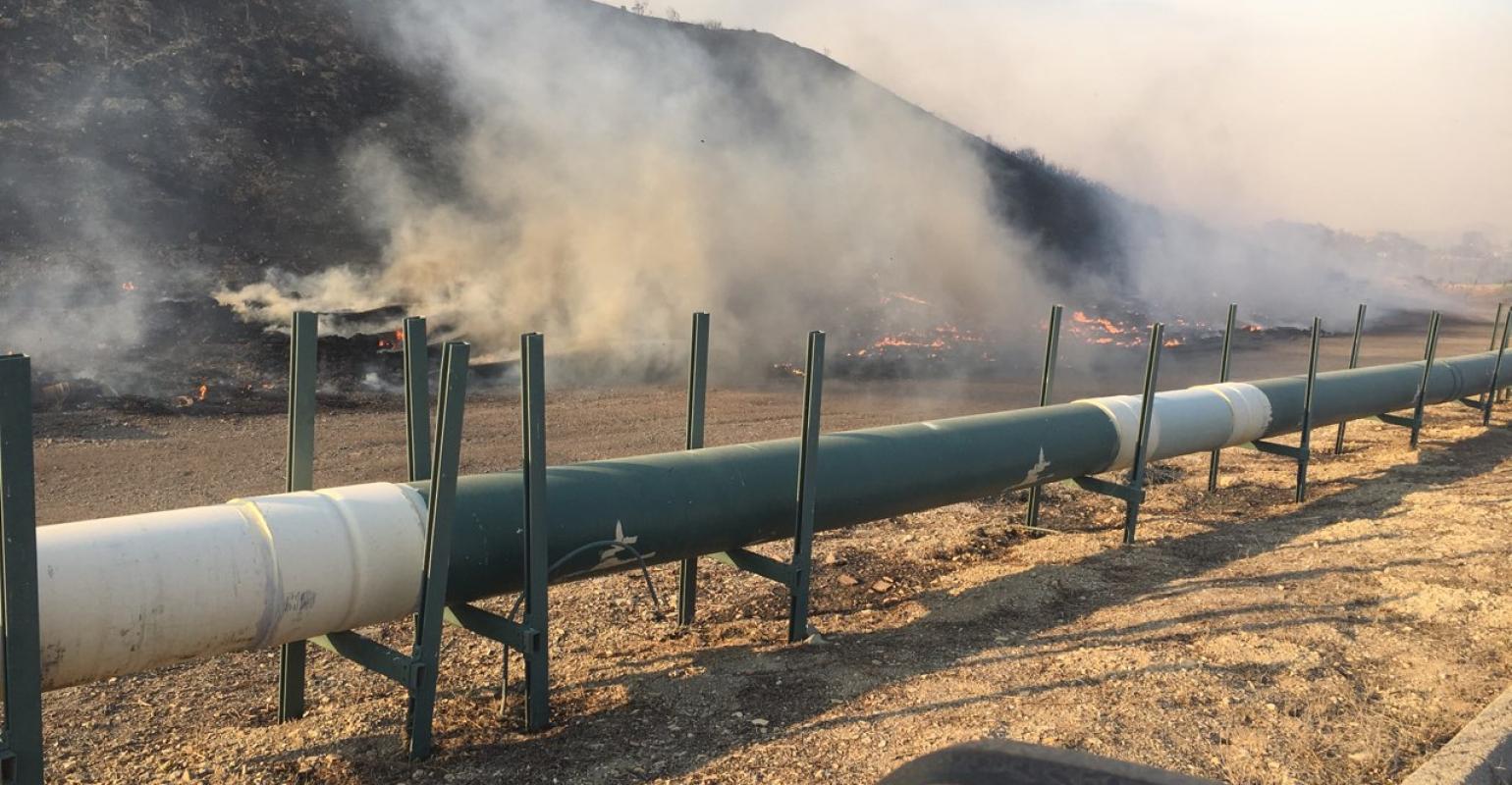 Calabasas Landfill has come a long way just weeks after being caught up in California’s deadly wildfires. However, it likely won’t be fully operational until Q1 2019.

Two and a half weeks after Calabasas Landfill in Agoura, Calif., was caught in the wildfires and shut down, it’s mostly back online, though with some temporary fixes. All systems likely won’t be fully operational until the first quarter of 2019, projects Mark Revilla, division engineer for solid waste operations for Los Angeles County Sanitation Districts.

Landfill staff were literally fighting the fire that day and were able to at least protect vital infrastructure, namely the flare station and power plant.

“Things appeared to be somewhat manageable at first, but then the blaze jumped from the west to the east side the morning of the ninth, and at that point, they were trying to fight fire at multiple locations. It became overwhelming. The whole community was on fire by then,” says Revilla. 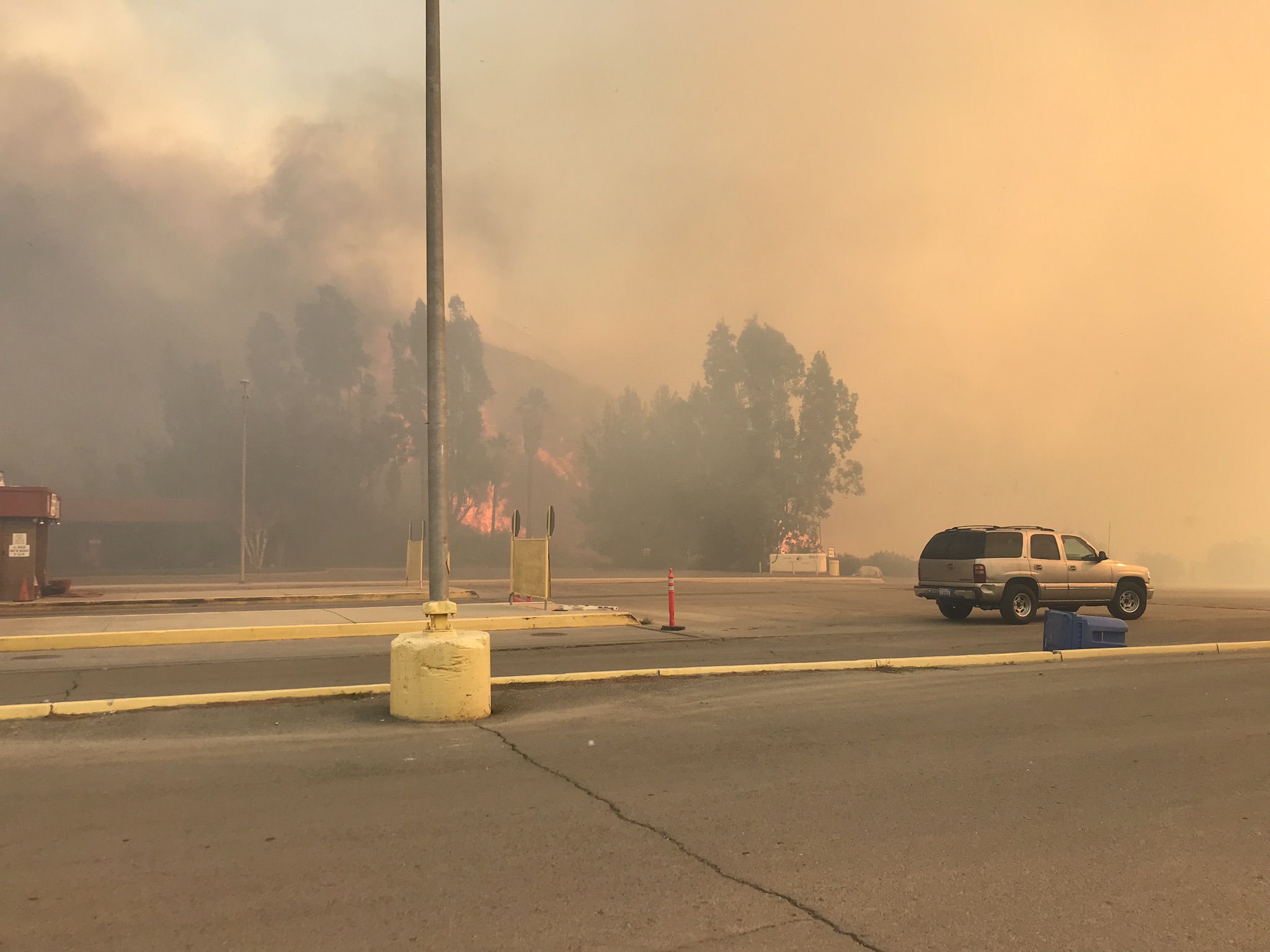 The skeletal staff of responders evacuated, moving to a staging area where they waited, hoping to return to the site. But then they were pushed back further and eventually heard from California Highway Patrol that they would not be going back to work that day.

While the freeway was still shut down the next day, November 10, some staff were allowed access in their district vehicles and returned to the landfill, where the blaze had been reduced to small spot fires. By this point, they had generator power, so the team of engineers, maintenance and construction crew and superintendents began making assessments and doing initial repairs.

“We had 40 or 50 staff come out over the weekend and on Veterans Day, many who rearranged plans to address the concerns and needs of the landfill,” says Revilla.

The gas collection system was running at a little more than half its 5,000-cubic-feet-per-minute capacity when it was turned back on, says Frank Caponi, division engineer and head of Air Quality Engineering for Los Angeles County Sanitation Districts.

But about 50,000 linear feet—or 10 miles—of pipeline for environmental controls was damaged. The melted piping prevented collection in some areas, especially the west side that sustained the most damage. 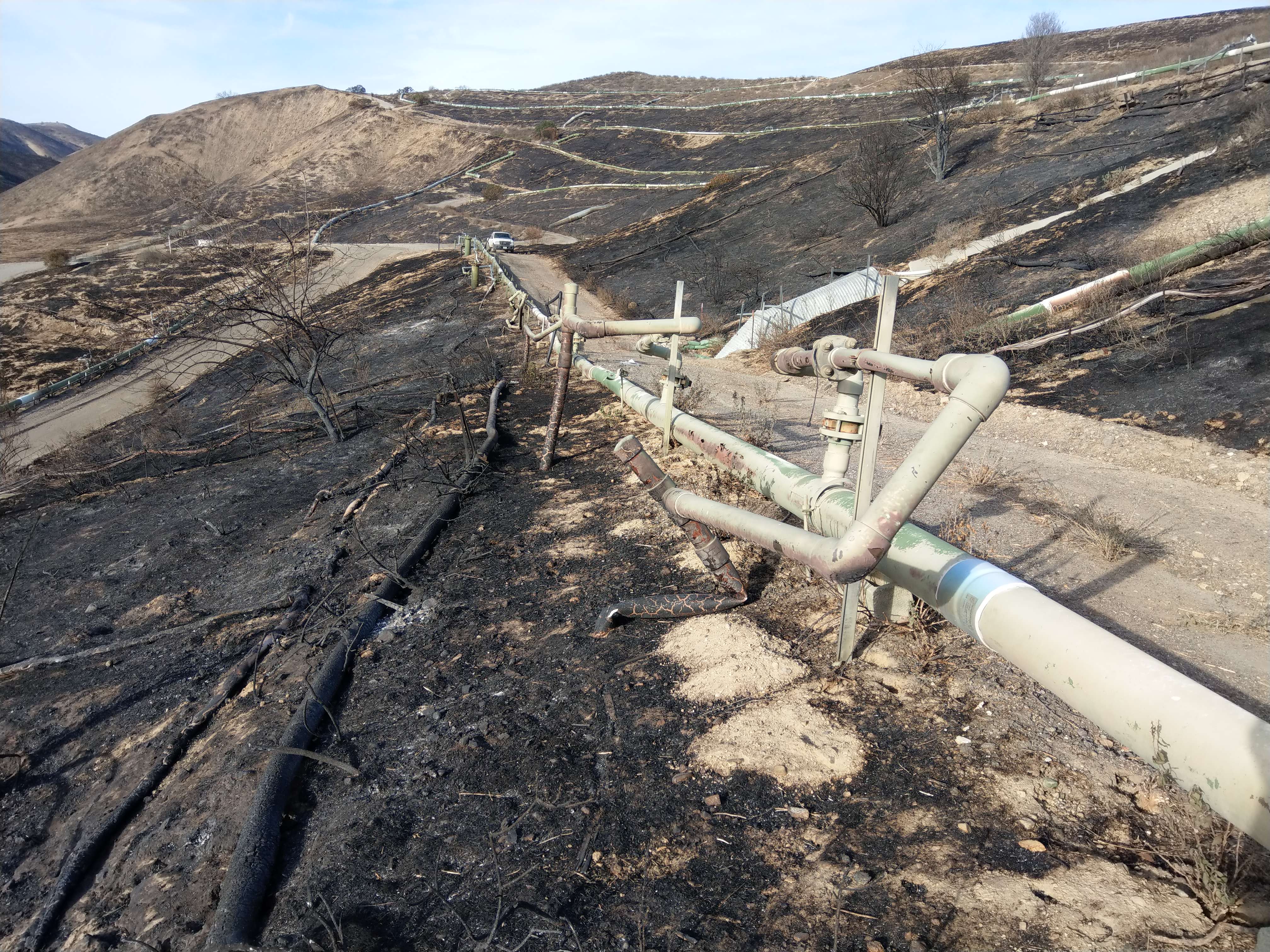 About 85 percent of the gas collection system is back online now. And early boundary monitoring found no gas at the extremities of the landfill. Ongoing monitoring indicates no gas migration—a big concern, especially as the community practically touches the site’s boundary.

“We are still providing regulators updates on our progress. And we are not just providing routine data but more information since we have some temporary setups,” says Revilla, noting regulators were satisfied with how quickly and efficiently systems were restored. He adds staff are working on a timeline for regulators on what still needs to be done.

But because this a declared emergency, if needed, the air quality management board could waive certain regulations, and a quasi-judicial board considers relief requests, says Caponi, adding the same considerations would be made around water quality. 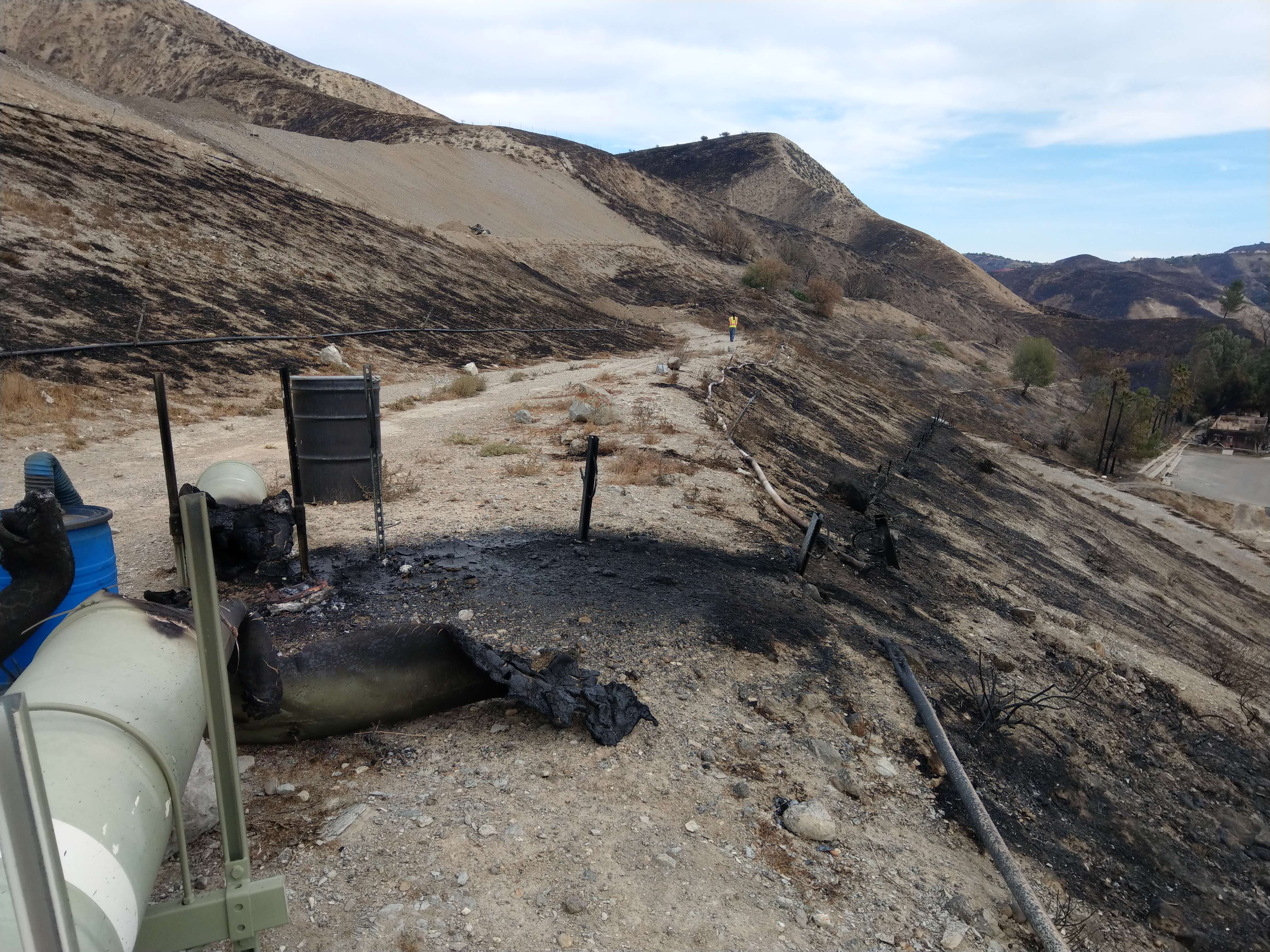 Calabasas, which began receiving trash again November 14, lost one of its main offices. So, staff are working from temporary trailers and running the communication system by cellular hotspots as they work to restore communications.

The storm drain system was put back together by November 20 in preparation for the next day’s major rain event. Six-tenths of an inch of rain fell in hours, which meant working fast to re-establish the system and prevent massive runoff and ensure slope stability.

For now, operators are bypassing incapacitated sections using temporary means to provide services that are normally automated, like pumping systems and condensate collection and leachate collection systems. These liquid materials are currently going to temporary tanks or sumps that are manually pumped.

“We have never had a major fire this devastating on any of our facilities before,” explains Revilla. “We have a fire plan, and we have prepared as best we could by running through different scenarios. But it’s one of those things where you are only running war game scenarios. Until it actually happened, we were never truly tested.”