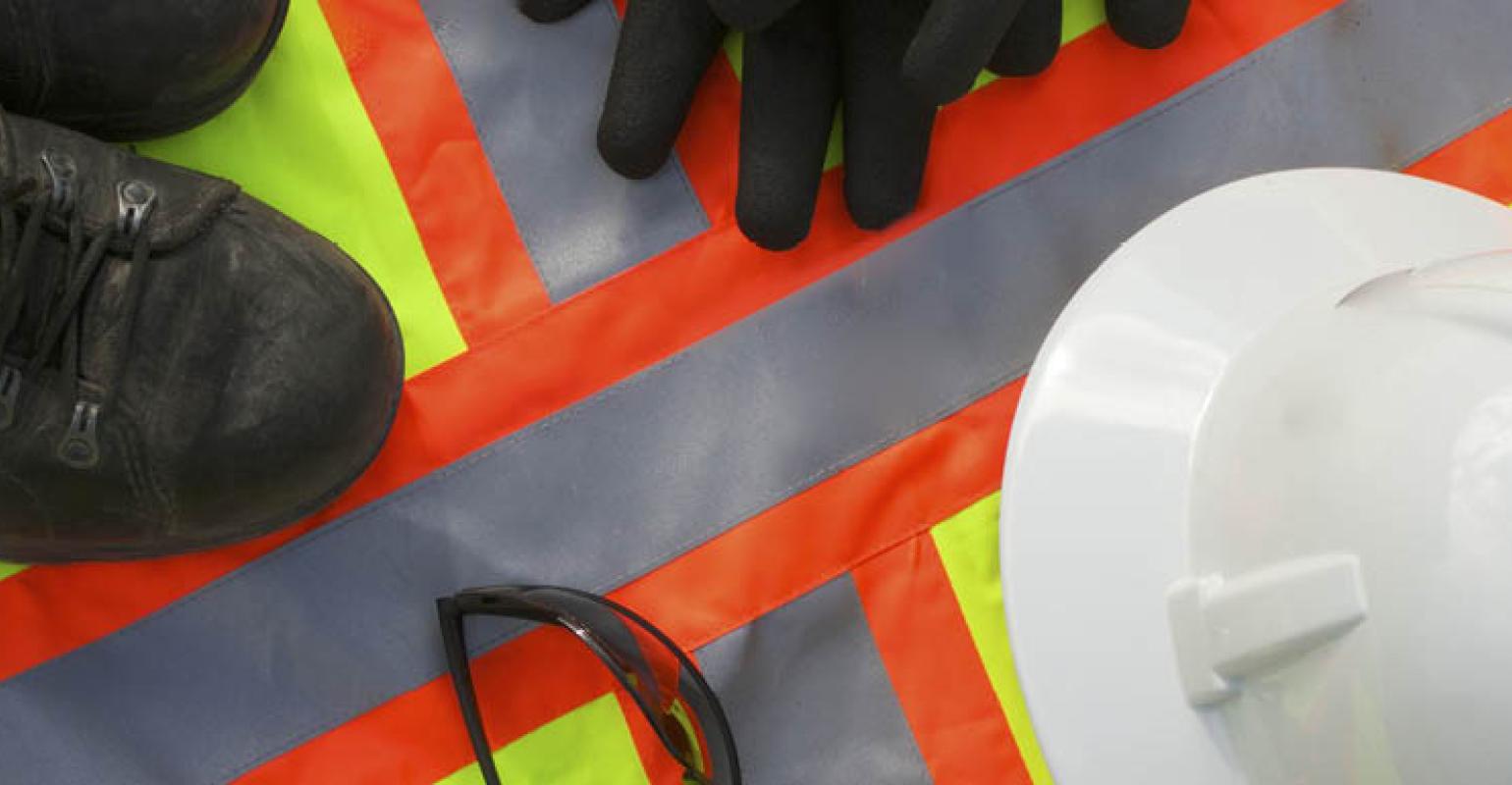 BLS has released its 2018 industry fatality summary, which shows a large increase in waste collection fatalities.

The U.S. Department of Labor’s Bureau of Labor Statistics (BLS) released its 2018 National Census of Fatal Occupational Injuries on December 17. And the numbers for the waste and recycling industry are sobering.

In its 2018 Census of Fatal Occupational Injuries Summary, BLS reported that fatalities of all U.S. workers remained flat. Refuse and recyclable material collectors remained the fifth deadliest occupation with 37 fatalities, up from 31 in 2017, resulting in a rate change from 34 per 100,000 full-time equivalents (FTE) to 44 per 100,000 FTE. As a private industry, waste and recycling saw the total number of fatalities rise to 49 in 2018 from 27 in 2017; 75 percent of these fatalities were a result of transportation incidents.

“The National Waste & Recycling Association (NWRA) is saddened by the increase in fatalities in the industry. NWRA and our members are committed to improving safety in our industry, and we will never accept any loss of life,” said NWRA President and CEO Darrell Smith in a statement.

Over the past four years, NWRA and its chapters nationwide have successfully lobbied for “Slow Down to Get Around” legislation, which is now the law in more than 30 states. These laws require that motorists slow down when waste and recycling collection vehicles are stopped and workers are getting on and off, just as motorists are required to slow down in construction work zones, stop for school buses or pull over for emergency vehicles.

“Unfortunately, NWRA was anticipating a rise in the fatality number [and] that is why we released a request for proposals in November to establish a baseline understanding of fatalities and injuries,” said NWRA’s Chief of Staff and Vice President for Safety and Standards Kirk Sander in a statement. “NWRA realizes that concrete steps are needed to understand this crisis for all of our workers to come home safely.”

NWRA and its members have undertaken numerous initiatives that represent a comprehensive approach to improving safety for workers in the waste and recycling industry, including:

The Solid Waste Association of North America (SWANA) also reports that data shows that refuse and recyclable material collection remains the fifth deadliest job in the United States. SWANA also pointed out that solid waste landfills had three fatalities in 2018 compared to six in 2017. There were also three worker fatalities at materials recovery facilities (MRFs) in 2018. 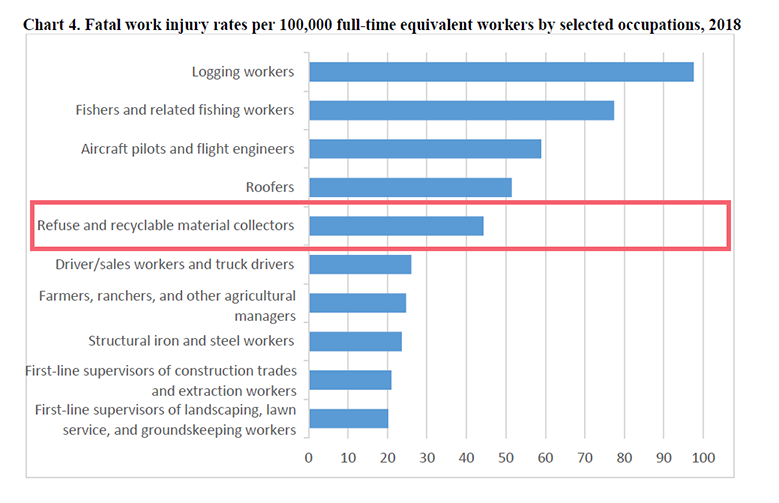 “The BLS 2018 fatality data for the industry is not surprising, as we have been telling SWANA members and others in the industry that we had identified an increase in fatal incidents last year since we recorded 19 of them in January 2018,” said David Biderman, SWANA executive director and CEO, in a statement. “The increased strength of the economy in 2018 may have played a role in the higher number of fatal incidents, as volumes increased. Smaller private sector haulers have a disproportionate number of these tragic events, and we encourage them to take advantage of SWANA’s safety resources.”

“In addition to the 63 worker fatalities identified by BLS, SWANA is aware of about 100 third-party fatalities last year involving other drivers, pedestrians and bicyclists in the United States and Canada,” added Biderman.

In response to the uptick in early 2018, SWANA added new safety resources, including the rollout of its Hauler Safety Outreach program, during which SWANA chapters and their partners distribute safety materials at landfills and other disposal facilities. In late 2018, SWANA initiated its Safety Pledge, in which it asks drivers, heavy equipment operators, managers and others to pledge to do their job safely. More than 3,000 industry professionals have taken the SWANA Safety Pledge, with Texas and Arizona leading in total signatures.

“We are disappointed to see such an increase in solid waste collection worker fatalities in 2018 but remain resolute in our efforts to turn it around,” said Dennis Batts, emergency operations and safety program manager for the Fairfax County, Va., Division of Solid Waste and SWANA Safety Committee vice chair, in a statement. “We will continue to rally together to make this industry and its workers safer—and efforts like SWANA’s Hauler Safety Outreach Program and the National Alliance signed in September 2019 between the U.S. Occupational Safety and Health Administration, National Waste & Recycling Association and SWANA will help to focus those efforts on the risks that pose the greatest danger to solid waste employees and the public they serve.”

When asked to explain why this is such a big jump in fatalities, Biderman told Waste360 that SWANA is still reviewing the BLS dataset in more detail to better understand the reasons for the unprecedented increase in collection fatalities experienced by the solid waste industry in 2018.

“I suspect the improved economy last year contributed to it,” he explains. “Based on the data that SWANA collects, a growing and disproportionate number of fatal incidents involve small haulers. That is one of the reasons that in early 2018, SWANA started a Hauler Safety Outreach program at which collection crews at landfills and other disposal facilities, including many small haulers, are given safety information. We intend to ramp up our Hauler Safety Outreach events in 2020, and several larger companies in the industry will be working with SWANA to host these important events.”

Biderman also noted that moving from manual collection to automated collection will likely help reduce the frequency of struck-bys or helpers falling off the riding step, but drivers of automated side loaders are not immune from being involved in fatal incidents.

“SWANA is a big proponent of using telematics, radar and other systems to protect workers,” he says. “Some drivers consider in-cab cameras to be ‘big brother’ watching them, and we need to do a better job of explaining that these systems are being added to protect drivers and the public.”

“The industry needs to recognize that we have a serious safety problem and work together, collectively, to address it,” adds Biderman. “It affects our ability to attract and retain drivers. Every fatality is a stain on this great industry, and distracted driving is a factor in only a small percentage of these tragic events. Nothing we do at SWANA is more important than safety, and we look forward to developing new safety initiatives and programs that help get the industry off the list of most dangerous jobs in the United States.”

The following data comes from the Census of Fatal Occupational Injuries (CFOI):

In 2016, the CFOI began identifying fatal injuries to independent workers. Independent workers are involved in a work relationship that is finite and involves a single task, short-term contract or freelance work.

In November, BLS released the 2018 employer-reported injury and illness data showing an increase in the solid waste collection employee incident rate and reductions for employees at solid waste landfills and MRFs.