The Traveling Trash Men Take on Cleanup Effort in Baltimore 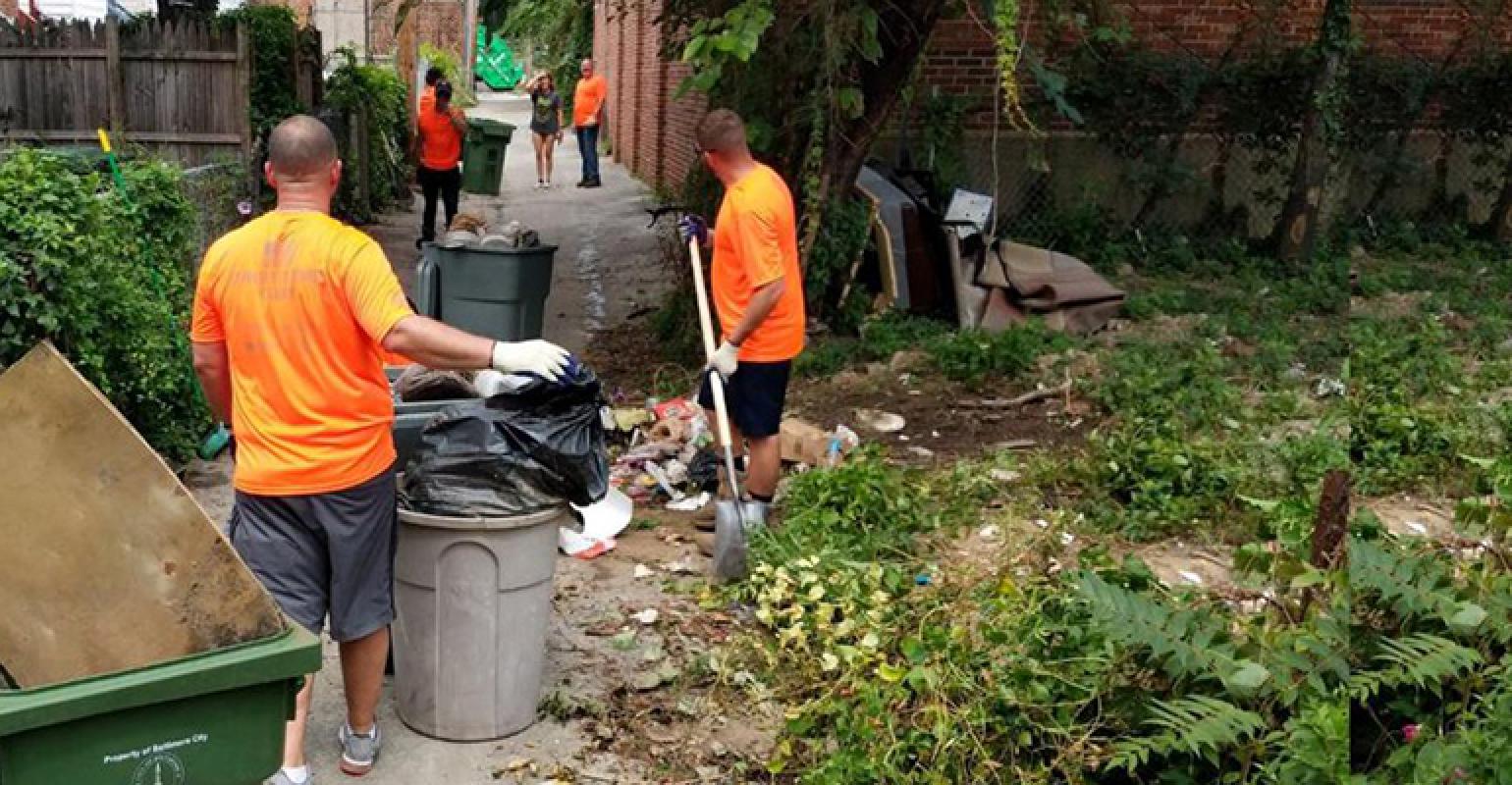 Moving forward, the mission for The Traveling Trash Men is to partner with haulers and clean up different cities in need across the U.S.

John Rourke, CEO of Jupiter, Fla.-based All American Sanitation, retired from the U.S. Army in 2015 and started his trash collection business in 2017. Recently, Rourke and his company teamed up with Allstar Aggregates, Maggio Environmental and Gruntworks Clothing to create The Traveling Trash Men, an operation to help clean up America.

Rourke served in the Army for 16 years and was raised by his father who was a New York City police officer and then commander of the America Legion in Jupiter for 25 years before he passed away. Throughout his life, Rourke was constantly taught the importance of giving back and helping others in need.

Over the summer, President Donald Trump took to social media and tweeted about the “disgusting” and “dirty” city of Baltimore. At first, Rourke brushed off the president’s comments as political hyperbole, but then he began looking through hashtags on Instagram from Baltimore residents and started watching videos about how bad the situation truly is.

“It was really bad and very surprising to me to see that a city in the United States of America has this much garbage on the streets,” explains Rourke. “If I see something terrible is happening and I feel like I can help, I need to help. I thought, ‘I know garbage people—we have to be able to do something.’”

Rourke called his friend who owns West Palm Beach, Fla.-based Allstar Aggregates, which also owns Maggio Environmental Services on Long Island, N.Y. Shortly thereafter, they made their way to Baltimore after obtaining permission from the city to bring in a garbage truck and dump at the landfill. 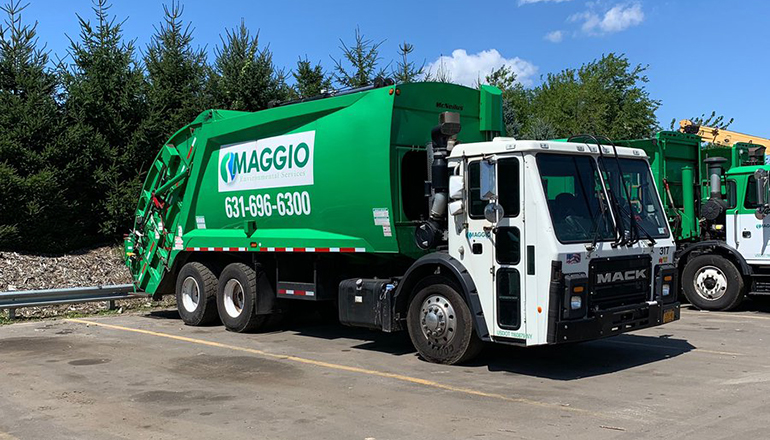 “When I spoke to the city’s Department of Public Works (DPW), they couldn’t believe I wanted to come there with a garbage truck and pick up garbage for free,” says Rourke. “They approved us to dump at the landfill for free and store our truck at their yard. They mapped out an area with the most 311 calls (the city’s bulk trash and illegal dumping line) where most complaints were coming from.”

When The Traveling Trash Men arrived in Baltimore, a total of eight volunteers began going block by block picking up litter and going into the alleys, which were completely overwhelmed with bulk trash. Within the first 30 minutes of being on the ground and picking up trash, two men overdosed in front of Rourke and his team. An area resident saw what was happening and ran out of her house with Narcan, and Rourke and his team administered the drug, saving both men. 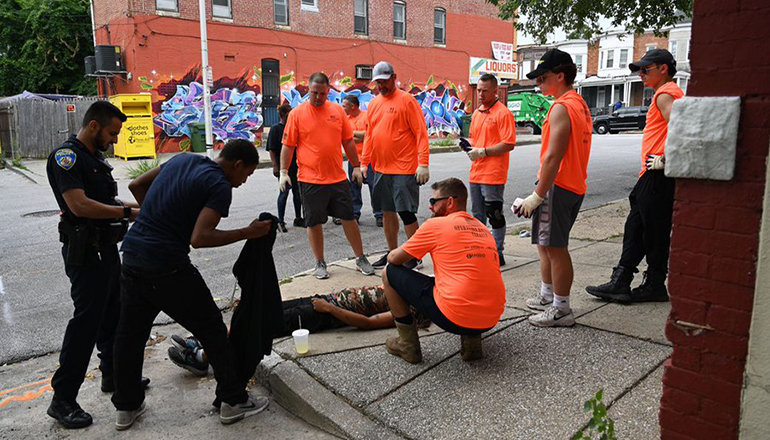 After that incident, the team went alley by alley over the course of three days, collecting nearly 21 tons of garbage, according to Rourke.

“On the main streets, you’re finding bottles, cans, paper products and cups, but when you get in those back alleys, it’s strictly illegal dumping,” he explains. “People come out at night with dump trailers and dump loads into the alley instead of paying to dump their larger items, like a couch, TV or recliner.”

Rourke says the city needs to install cameras in these areas that are getting hardest hit by illegal dumping. He also suggests the city install roll-offs or dumpsters on the ends of those streets or implement a pay for recycling program.

Baltimore City Councilman Leon Pinkett III, who represents the Seventh District, found out that Rourke and his team were initiating in a cleanup project in one of the communities that he represents in west Baltimore and decided to help.

“We participate and assist in organizing cleanups throughout the district, so that’s not unusual,” explains Pinkett. “But when I heard about the work that they were doing and the fact that they had traveled from as far as Florida to assist us, I felt obliged to not only thank them personally but to lend my efforts to the cleanup.”

“It was incredible what we were able to accomplish over just a few days,” he adds. “The passion and commitment displayed by John and all of the volunteers allowed us to clear away tons of trash in a section of the city that is suffering from sanitation issues, many of which are caused by individuals who use this community as a dumping ground.”

As of right now, the city relies on its 311 system to report illegal dumping; however, Rourke says that system is completely overwhelmed and can’t keep up with incoming calls.

“A number of neighborhoods have become areas targeted by illegal dumpers,” explains Pinkett. “These are communities in east and west Baltimore that have had to deal with a chronic dumping problem pervasive in the city. This problem tears at the fiber of communities that are trying to overcome a variety of challenges and drains the city of much-needed resources while we try to deal with this illegal activity.”

“There is definitely a need for residents in many of our communities to be educated on how we should properly dispose of our waste,” he says. “While we as a city have a chronic illegal dumping problem, we also have far too many residents who don’t respect our communities and their neighbors.”

Pinkett adds there isn’t an adequate level of enforcement and penalties to discourage the illegal dumping that is happening across the city.

“Lastly, we need to evaluate our systems and make certain that the city’s agencies are operating as efficiently as possible, and that we are using technology where appropriate and deploying resources in an effective manner,” adds Pinkett.

Baltimore was the first U.S. city cleanup The Traveling Trash Men tackled as a group. Before that, they did hurricane relief, and most recently, they’ve been helping in the Bahamas since Hurricane Dorian hit. The group has been collecting donations and sending food and supplies down to the Bahamas via helicopter. 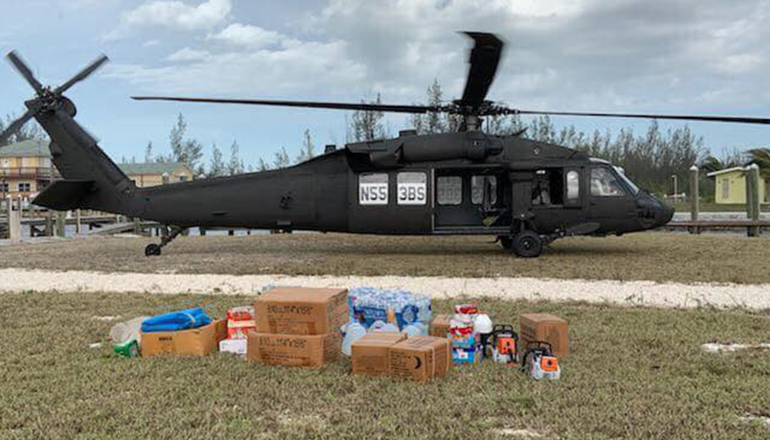 Moving forward, the mission for The Traveling Trash Men is to clean up different cities based on votes by residents on social media.

“Our plan is to go to a different city and partner with a hauler there,” explains Rourke. “We would love to get haulers to partner with—that’s the ultimate goal. If you can help, you should. These cities are overwhelmed with garbage. In the United States of America, it shouldn’t be that way.”