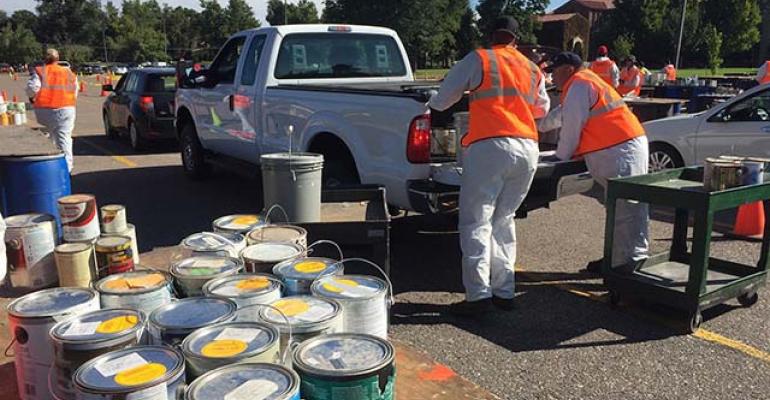 On a smaller scale, a handful of individual companies have set out on their own to address their products at the end of life.

Although many consumer goods companies are on the cutting edge when it comes to developing sustainable manufacturing practices, few are stepping in to deal with their products once they’ve made and sold them—and consumers are done with them.

“Downstream sustainability issues have not been paid much attention by goods producers because traditionally they have not had to deal with products at the end of life,” said Scott Cassell, CEO of Product Stewardship Institute, a nonprofit that focuses on end-of-life management of consumer products. “Generally, manufacturers will manage products after consumers use them only if they are forced by the government, if they see marketing advantages or if there are business risks, such as when potentially hazardous materials end up where they don’t belong.”

Still, a few industry groups are taking the lead, including the paint, battery, food carton, thermostat and mattress industries. On a smaller scale, a handful of individual companies have set out on their own to address their products at the end of life.

Developing viable models has taken collaboration and trial and error, with more work ahead.

PaintCare, a nonprofit created by paint manufacturers, implements a stewardship program for unused paints. Ten percent of paint sold goes unused, costing about $8 per gallon and more than half a billion dollars per year to manage, according to Cassell, whose organization worked with PaintCare to develop the model to manage this fast-accumulating waste.

“We see that it’s used in its original form when we can, for instance for projects like Habitat for Humanity, or that it’s recycled and sold as recycled paint by companies like GreenSheen,” says Brett Rodgers, PaintCare director of communications. “It can also be recycled and incorporated into a product used as landfill cover.”

Consumers pay a fee at the time of purchase, which is passed to manufacturers who remit it to PaintCare to set up the drop-off sites and see that the paint is processed responsibly.

“The PaintCare program makes paint recycling more convenient by offering drop-off sites closer to home across an entire state, usually at retail paint stores,” says Rodgers. “We also work with household hazardous waste facilities that box up paint they collect. Our haulers then pick it up and send it to paint recyclers, saving local governments money and time.”

The Mattress Recycling Council (MRC), another industry-sponsored nonprofit, runs mattress recycling programs in three states with recycling laws: Rhode Island, Connecticut and California. Like with the paint model, consumers pay a fee at time of purchase that funds the three programs, primarily helping pay recyclers’ expenses with some spent on consumer education.

No other states are on board yet.

“Maine was considering legislation to begin a program, but there are no recyclers in Maine to handle mattresses, and the bill was vetoed,” says Ryan Trainer, president of MRC. “We continue talking to other states, but our challenge is the same as in Maine: there is not enough infrastructure to support this program. Either there are no [mattress] recyclers, or they can’t handle the volume a statewide program would generate.”

Connecticut and Rhode Island have at least two recyclers to take the mattresses, and there are about 10 in California. Collectively, more than two million mattresses have been recycled through the program.

The Mattress Recycling Council is looking for new markets and asking states to put aside funding for recyclers, working with them to create educational materials for potential recyclers.

Meanwhile, says Trainer, “It comes down to investments from private recyclers. Developing new markets will hopefully make it profitable, and more recyclers will jump in.”

Tetra Pak, who manufactures food and beverage carton packages, took the lead as one company but did it by recruiting other manufacturers. It founded the Carton Council of North America to increase carton recycling in the U.S.

“In our view, collaboration and partnerships are the answer to having a scalable recycling model and reaching tangible results,” says Comere “It takes a strong, dedicated commitment and a productive industry collaborative approach. This is why Tetra Pak founded Carton Council together with our competitors.”