Yes, Mavericks Grey Water Tunnel Vision IPA, is made with recycled water from sinks and showers and treated with NASA technology to clean and use. Though California law prohibits its sale for drinking, grey water, once put through the process is clean enough to, well, drink.

California-based Mavericks Brewing, the sister independent craft brewery of Half Moon Bay Brewing, is taking water conservation to another level with the IPA, made with 100 percent high-purity recycled water.

Knowing the technology works, Mendonca’s concern was simply about taste. Craft beer drinkers like quality, and taste comes first, he says. After making a few small batches, Half Moon Bay’s Brewer John Costa gleefully approved, and Mendonca was all in.

However, as California law lags behind the technology, Mendonca says the health and safety codes don’t take into account today’s advanced technology, used worldwide, which allows water to be highly purified before reaching consumers.  In fact, the technology used to purify the grey water for Mavericks’ IPA belongs to NASA.

According to EPA, no documented cases of human health problems due to contact with properly treated recycled water have been reported. So purity is not the issue, as technology already exists and works, he says.

The problem is what some refer to as the “yuck factor” of reusing sink, shower, and dishwasher water (not toilet water) for drinking purposes. However, the amount of water literally going down the drain is staggering, Mendonca says. Getting consumers past the yuck factor, means educating them about recycled water’s possibilities. Beer is a great way to get consumer attention, and tastings make it easy to prove that taste isn’t a problem, he says.

Standards for recycled water are actually higher than for groundwater use, Mendonca says, and higher yet, for crafting beer. It’s a matter of time before legislation reflects technological advancements and water consumption concerns, he says.

In fact, the EPA already touts the benefits of water recycling, which include a dependable, locally-controlled water supply, as well as, an additional source of water, which would decrease the diversion of water from sensitive ecosystems. It lists other benefits as well, including decreasing wastewater discharges, reducing and preventing pollution and creating or enhancing wetlands. It’s these and other benefits for the environment that the makers of this brew hope to shine a light on and encourage in the drought-stricken state.

California’s own Orange County Water District has reused wastewater for drinking since 2008, through treatment that includes sending water through the ground basins. The district, which serves 2.4 million, currently recycles 70 million gallons of grey water per day with plans to increase 100 million gallons a day.

Legislation currently in committee could be the next step in getting state regulation in line with technology, says Mendonca.

California law prohibits the use of recycled gray water for drinking. However, an active bill in the state house looks to change the issue. State law requires recycled water be injected to replenish aquifers then pumped out as groundwater before it can be used for drinking purposes.

The proposed bill, to be heard later this month by the state’s Senate Energy, Utilities and Communications committee, could change regulations, increasing the accessibility of recycled water, including, perhaps, making it available for drinking purposes. The bill could make it directly accessible from a treatment plant without first becoming groundwater.

“There’s no such thing as non-recycled water. It’s just a matter how you get it,” Mendonca says.

Regulatory delays haven’t stopped him from moving forward with a more sustainable brew. A panel of beer experts recently tasted the water-conscious in a blind taste test of the Mavericks’ beer. One was made conventionally and the other made using recycled water, even the experts couldn’t tell which one was which. 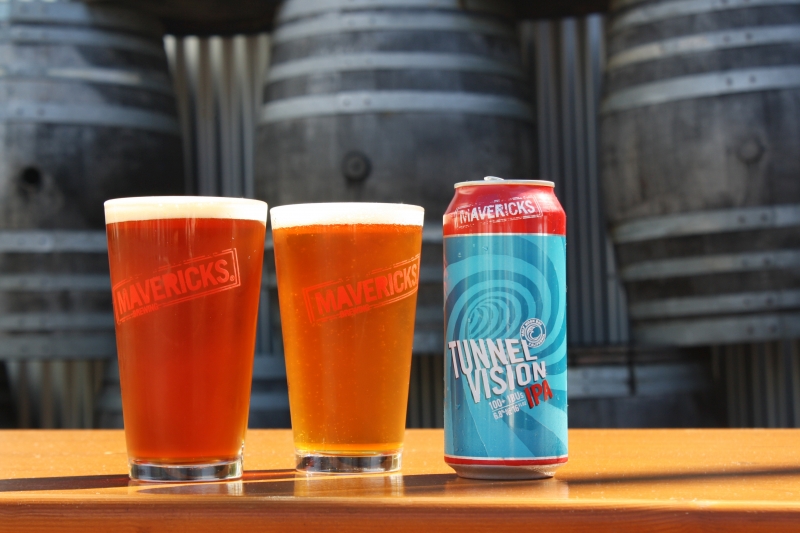 “Once you taste it, you forget about it.”

And as the beer continues to draw attention to recycled water and its potentials, Mendonca feels it could have a small impact on legislation. He’s talking with experts and politicians and getting good feedback and questions about what needs to be done.

Crafting beer to purify water is not new. Employing a modern take on the age-old tradition, Mendonca says, celebrates the value and safety of recycled water as an essential component of a sustainable water future.

“This is ‘back to the future’ with beer,” he says.  “Back then you didn’t have these water systems, so you treated water like the precious commodity that it is,” says Mendonca.

As someone who grew up on a farm, and still runs it with his siblings, Mendonca is serious about conserving and recycling water.

“I’m a huge believer that water is a scarce commodity. It’s not endless and free.”

With current legislation, for now, though, the beer is free. Mavericks can offer the beer for tastings and for not-for-profit water-sustainability programs only in a demonstrative way. Since it’s a demo project to underscore that recycled water is clean and tastes good, Mendonca can’t sell the beer. He’s trucking the recycled water in, which means it’s not even economical to brew when there’s no profit. But, Mendonca says, it’s more to make a point.