Where Is Renewable Natural Gas Moving Forward and What Will This Mean for the Industry and States? (Part 3) 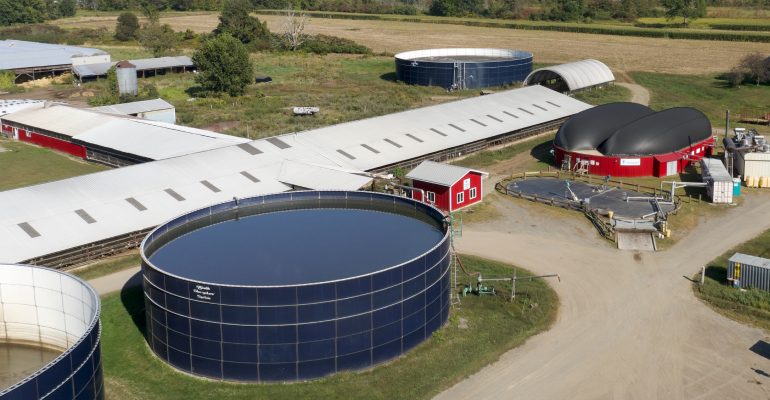 The final part of this series reports on financing mechanisms to support RNG infrastructure.

Credits for renewable natural gas, made possible through the federal Renewable Fuel Standard Program and California’s Low-Carbon Fuel Standard (LCFS), have been the bread and butter sustaining RNG projects for years. This green fuel has typically been a hard sell beyond California, however. But lately other funding mechanisms are emerging that may open new markets. A few utilities, a growing number of equity investors, and other players are reaching into their pockets to give biogas a monetary boost.

What conditions are these entities expecting before they invest in these projects? Exactly what are they offering, and to whom? And what might these evolving funding options mean moving forward?

Chad Lindholm, vice president of Clean Energy, says that what financial institutions are looking for in building out upstream production — infrastructure like anaerobic digestion (AD) — is long-term demand certainty in the transportation sector and gas for heat and power.

In order to show that they’re bankable, biogas producers pursue that long-term commitment through downstream RNG suppliers such as Clean Energy, which buys its green gas that flows through its network of 540 fueling stations. Clean Energy delivered 143 million gallons of RNG in the transportation space in 2019 and is positioned for further growth in 2020. The refuse industry represents the majority.

Equally important to long-term demand, Lindholm says, investors are looking for certainty around revenue programs for producing gas. “California, because of LCFS, has additional revenue and has led the way,” he says.

California’s program, which assigns more value to lower-carbon fuels, has especially driven investments in RNG sourced from agriculture and processed in anaerobic digesters. Smithfield Foods announced a deal with Dominion Energy in October 2019 that will reportedly double its investment in RNG, and there has been some money channeling into agriculture projects elsewhere in the mid-Atlantic, with BioEnergy DevCo among those leading the way.

Biogas investors basically fall into three categories. The first group is private equity investors, which are mainly energy and infrastructure funds. There are dozens of them in the U.S., and they control billions of dollars of potential capital, according to John Hanselman,chairman and CEO of Vanguard Renewables in Wesley, Mass.

The second category of biogas investors is gas utilities. Vanguard recently entered a $200 million deal with Dominion Energy to build natural gas-generating facilities that process manure on dairy farms across the U.S. SoCal Gas in California is investing in RNG. Oregon’s Public Utility Commission recently determined that utilities could have ratepayers partially fund build-out of RNG infrastructure. And FortisBC in British Columbia bought three biogas upgrading plants to make RNG to sell to its customers.

The third category of biogas investors is banks. Historically, AD has not been an energy-producing interest to commercial banks. Now that they have seen long-term offtake and acceptable business models, an increasing number are willing to lend capital to developers, says Hanselman.

All three investor types are looking for a competent business plan that includes three elements: feedstock availability, viability of technology to produce the gas, and the offtake agreement for downstream consumption.

“If you don’t have all three, there is no way to get financing,” Hanselman says. “The downstream component — convincing offtakers to commit to a long-term agreement — is the biggest challenge, because most energy in the U.S. is not traded on the 10- to 20-year terms lenders would like to see. But long-term agreements are needed as a safety net for equity and debt investors.”

In the transportation sector in particular, lenders also need to see long-term demand for natural gas vehicles to have confidence that RNG projects will continue to spring up. But these trucks carry a $30,000 to $40,000 premium over diesel trucks.

So Clean Energy has launched a finance program aimed at the end user. Branded Zero Now, the program offers vehicles with engine warranties at a price equal to that of diesel trucks.Fleets financed or purchased through Zero Now can also purchase Clean Energy’s Redeem RNG with a fixed discount to diesel.

“We developed Zero Now with them to hedge natural gas costs over diesel fuel, which means operators get vehicles from Clean Energy with no added out-of-pocket cost and are guaranteed fuel savings over the vehicle’s life,” says Lindholm.

Gas utilities in British Columbia have adopted a rate-based model where utilities pay more for RNG and spread incremental costs among all ratepayers, resulting in penetration of RNG with only a small increase in all payers’ bills.

Brad Douville, president and CEO of Greenlane Renewables, which supplies RNG projects in British Columbia and will supply one in Quebec, thinks similar options may be up and coming in U.S. regions looking to advance RNG.

“This rate-based model was successful when rolling out wind and solar, and it’s starting to be used for getting RNG into the natural gas network,” Douville says.