While converting from dual-stream to single-stream recycling, Charleston County, S.C., and its consulting firm, Tampa-based Kessler Consulting, Inc., decided to pit two kinds of collection equipment against each other in a pilot test. The options were an automated side loader (ASL) and a front-end loader with an automated attachment called the Curotto-Can.

Charleston County brought Kessler on board in 2009 to help retool its entire solid waste program, an effort that aims to boost the county’s landfill diversion rate from its current level of 10 percent to 40 percent. “We are implementing several strategies to reach that goal,” says Don Ross, a Kessler project manager. “Measures include shifting to single-stream recycling and setting up a composting program.”

Ross always leans toward automated collection equipment. “I’m a fan of automated collection,” he says. “ASLs make collection work safer for drivers. Instead of walking around behind the truck where another vehicle might hit them, they stay in the truck. ASLs also do the heavy lifting, and so reduce injuries.”

Good as they are, ASLs aren’t ideal, continues Ross. “Side loaders are expensive to operate, and you need spares because there are many breakdowns. The lift-arms cycle between 1,000 to 1,200 times per day. That’s a lot, and it causes metal fatigue.”

On the lookout for ideas that might overcome ASL maintenance issues, Ross discovered Curotto-Cans at a trade show a couple years ago. 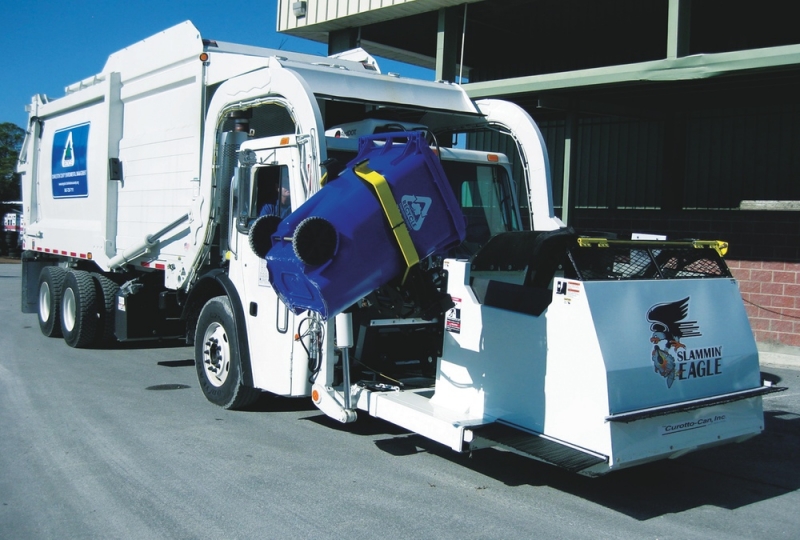 Developed by Sonoma, Calif.-based Curotto-Can, Inc., the 4.6-cu.-yd. device attaches to the fork of a front-end loader. A lift-arm on the device picks up recycling or trash containers and dumps them into the Curotto-Can. It takes five seconds to stop the truck, grip and dump a can and start moving down the street again. In addition to carts the arm can pick up bulky items like refrigerators and sofas.

After 10 to 15 lifts, the front-end loader’s fork arm empties the Curotto-Can into the truck’s hopper.

To earn the maintenance benefits of front-end loaders on residential routes, however, you had to buy into the Curotto-Can. Ross had no first-hand experience with the device. Neither did county officials.

“Solid waste work is local,” Ross says. “What works in Washington, D.C., may not work in San Francisco. So we knew that the Curotto-Can might or might not work in Charleston County. I suggested a pilot test pitting the best ASL we could buy against a front-end loader equipped with a Curotto-Can.”

By this time, Ross and Charleston County officials had begun calling the front-end loader and Curotto-Can assembly the automated front loader or AFL, so the pilot test would pit the ASL against the AFL.

Separate from the equipment pilot test, Kessler and Carol Stream, Ill.-based Sonrai Systems, which designs RFID systems for waste management applications, were implementing a larger pilot test for the overall single-stream recycling program. Kessler and Sonrai set up a system for using RFID tags embedded in the recycling collection carts to track homes that were and were not participating. Los Angeles-based Rehrig Pacific Co. supplied the 95-gallon wheeled collection carts. 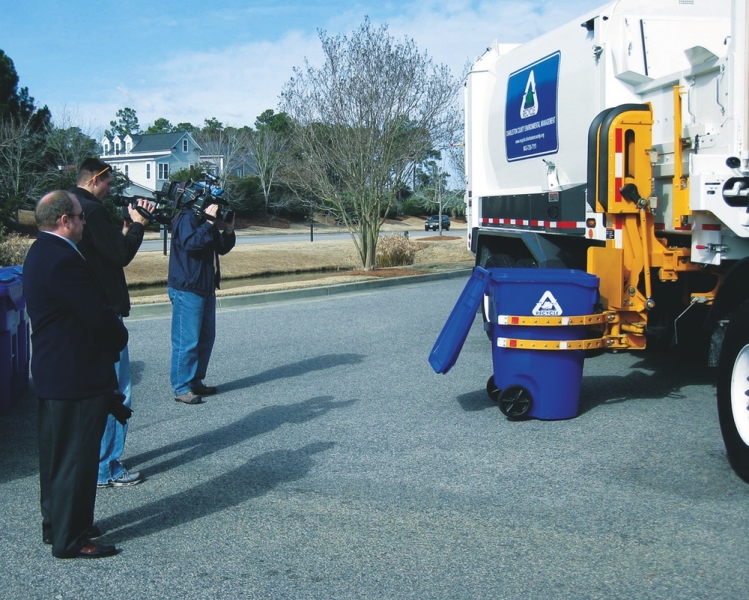 Readers in the collection trucks would collect the data from the RFID tags as the carts were dumped. The data — location, time and date — would flow into an onboard computer. By evaluating that data, county officials could determine who was and wasn’t participating and develop programs to increase participation.

“That system was a perfect measuring stick for the collection equipment test,” Ross says. “We could use the location, time and date information to compute the time between tips, which would enable us to compare the productivity of each truck.”

Ross eliminated another variable — the fact that different drivers have different skills — by assigning one driver to drive both trucks. “He would drive the ASL for two weeks and then switch to the AFL for two weeks, running the same routes on the same days with each truck.”

The route included 5,000 single-family homes in five diverse neighborhoods. Ross used a route optimization program to lay out the route, making sure the driver understood the importance of driving the same route with each truck.

The six-month pilot evaluated both trucks for reliability, productivity, fuel economy and operating in cul-de-sacs.

And The Winner Is …

Both units proved reliable in the test, but the Curotto-Can AFL edged out the ASL in productivity. Depending on the route and depending on participation, lifts per hour ranged from 110 to 150 for both units. “Generally, the AFL made slightly more lifts per hour than the ASL,” says Hal Crawford, collections manager with Charleston County Environmental Management.

The pilot also compared the times required by the Curotto-Can AFL and ASL to move through cul-de-sacs. The AFL was faster. Because the driver could see the lift arm through the front window, he could position the arm and grip the container easier and faster. The driver can also watch the recycling as the lift arm dumps the recycling, spot contamination, remove it, record the problem and have an appropriate message sent to the homeowner. 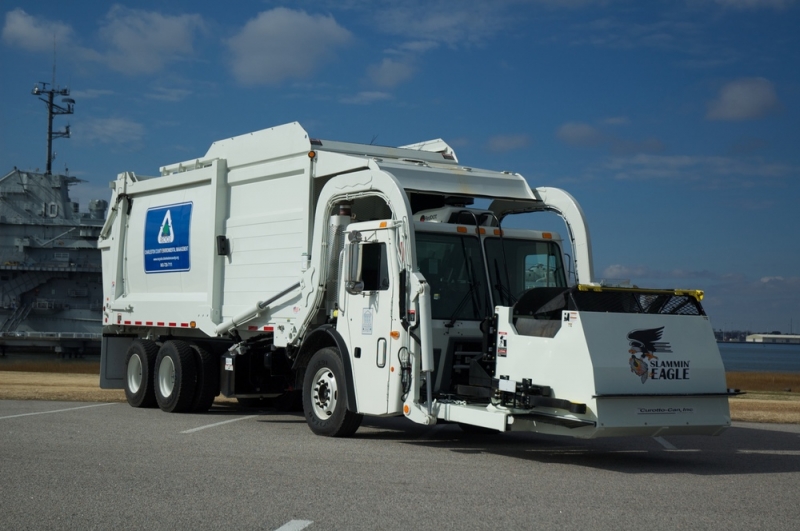 An unexpected result arose when residents laid large pieces of cardboard on the ground beside the recycling containers — something Charleston County officials encouraged. Neither truck could use its lift arm to pick the cardboard up off the ground. The driver of the AFL could, however, hop out of the low-entry cab, pick up the cardboard and toss it into the Curotto-Can.

While the driver could also exit the low-entry ASL cab easily, he could not reach the much higher ASL hopper. As a result, a pick-up truck had to follow the ASL and collect any cardboard placed on the ground.

Productivity was calculated using “time between stops” measurements collected by the Sonrai system, which represent the elapsed time in seconds between RFID tag reads (a factor that was consistent for both trucks). Not including the work of the chase truck, the AFL won the productivity contest by about 5 percent.

While the straight frame ASL that participated in the test could not collect the extra cardboard, a drop-frame side loader would have enabled manual loading and eliminated the AFL’s productivity edge. According to an ASL dealer, however, a drop-frame ASL such as the Labrie Helping Hand would cost $261,037, about 11.5 percent more than the AFL.

These advantages plus two more key considerations — maintenance costs and fleet standardization — drove the front-end loader with the Curotto-Can into the pilot test’s winner’s circle.

A recycling collection fleet of front-end loaders would also enable the county to standardize its entire fleet. In addition to curbside residential recycling, the county also picks up commercial cardboard and plans to get into multifamily recycling. Both efforts require front-end loaders.

“One of the reasons we elected to go with Curotto is the opportunity it provides to standardize our platform with front-end loaders,” says Charleston County’s Crawford. “We can install or remove a Curotto-Can in a few minutes and assign any truck to any of our tasks.

“Using interchangeable trucks to collect single-family and multi-family recycling and commercial cardboard will help control maintenance and parts inventory costs. It will enable our mechanics to specialize on one kind of truck.” 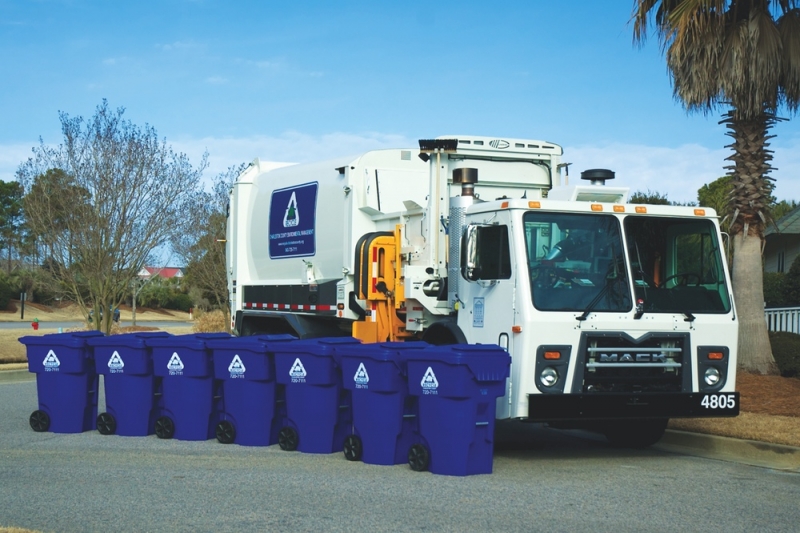 With the pilot test complete, Charleston County and Kessler have begun to roll out single-stream recycling to the county’s 110,500 single-family homes. “The pilot test covered 5,000 homes,” says Ross. “Now we’re up to 10,000. Another 10,000 will come on line in June, followed by more in August and September.”

Crawford expects that the county’s front-end loader fleet will eventually grow to 14 units, including two spares.

Thanks to the pilot test, Crawford is sure about the number. “I have complete faith in the data we collected during the test,” he says. “I can almost set my clock to when a driver will finish a route.”

Designing tests that you can measure is the key to a successful pilot test, adds Ross. By eliminating as many variables as possible, you can ensure that you will record consistent and reliable data that can be used to make solid judgments.

“That’s the takeaway from this experience,” Ross says. “Solid waste management is a local undertaking. If we ran this test in Peoria, we might get the same results; we might not.

“The point is, to get the right results, you have to run a measurable test. If you don’t measure it, you can’t manage it.”