Seattle bulks up its recycling rate with a food scrap collection and composting program.

The City of Seattle is fighting its way to a 60-percent recycling rate and will probably wind up somewhere between 56 and 60 percent when the 2012 figures are released. Only a handful of North American cities can claim similar rates. The highest rate, of course, belongs to San Francisco: 80 percent. And Portland, Ore., is just outpacing Seattle at 58 percent. Vancouver is also in the running at 55 percent. 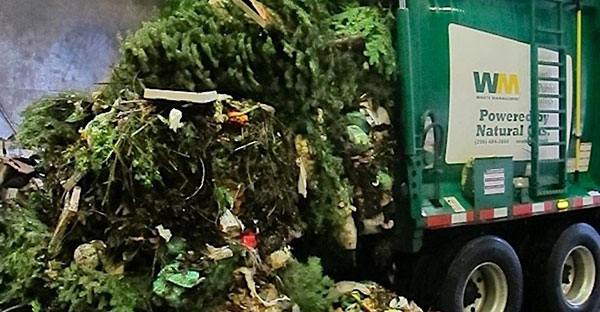 ach of these cities knows the secret to a high recycling rate: food scrap collection and composting programs. Such programs divert food scraps from the landfill, enabling cities to soar into the recycling stratosphere.

Seattle’s program covers single-family homes, multifamily buildings and developments as well as food service businesses. “Seattle is a pioneer in food scrap collection and composting,” says Michael Alexander, president of Recycle Away, a Brattleboro, Vt., company that markets trash, recycling and composting bins and helps governments and businesses set up collection programs. “While Seattle has been collecting food scraps for a number of years, less than 1 percent of the population has access to food waste collection programs. So it is happening but in a very limited way.”

Waste Management is one of the contract haulers at work in the city. The Houston-based company picks up both residential and commercial food and yard wastes.

Waste Management offers two kinds of collection programs for commercial customers. Small businesses that generate food wastes can opt for curbside service similar to residential service. “This is a cart-based program,” says Hale. “We provide carts with compostable liners. When we empty the carts, we reline them.

“Larger food waste producers use the traditional open market system. The customer calls the various vendors and shops the market for the best price. The vendor provides a container — one to eight yards — or even a roll-off container if necessary.”

Waste Management collects its multifamily and open market containers on a regular schedule that might call for one, two or more pickups per week.

Does the food waste cause odor and vector problems? “We haven’t heard many complaints from residential or commercial customers,” Hale says. “One challenge that we’ve had on the commercial side is with liquids. Some restaurants put soup into the containers. That gets too messy. So we’ve worked through Seattle’s public education and outreach people to stop that practice.”

“The system works well,” Hale says. “Contamination levels have declined substantially. We’ve probably gone from dozens of cases of contamination per month to no more than a handful.”

Given the extra weight of food waste compared to trash and recycling, the trucks must make extra trips to the city’s two transfer stations. “Our contract calls for penalties if we run overweight on city streets,” Hale says. “We’ve equipped all of our trucks with onboard computers, and we develop routes with cut-off points. When the truck gets to a certain point on a route, the computer orders a trip to the transfer station.

From the transfer stations, Waste Management and other vendors serving Seattle load the compost and green waste onto semi-trailers for the trip to one of two Cedar Grove Composting Inc. facilities, located in Maple Valley, Wash., and Everett, Wash.

While food scrap programs boost recycling rates, they also drive down costs. Compost tipping fees are dramatically lower than landfill tipping fees. Currently, for instance, Seattle trucks its trash 300 miles to a landfill in Oregon that recently raised its tipping fee to $120 per ton. By comparison, Cedar Grove’s tipping fees range from $40 to $50 per ton.

In the early 2000s, before the food scrap program began, Seattle’s recycling rate had stalled out and was hovering between 38 and 41 percent.

Then in 2005, the city allowed single-family home residents to begin tossing scrap fruits and vegetables into green waste curbside collection carts. In the first year, the recycling rate shot up 3 percent from 41.2 percent to 44.2 percent. From 2006 until 2008, the diversion rate rose another 5.8 percent to 50 percent. 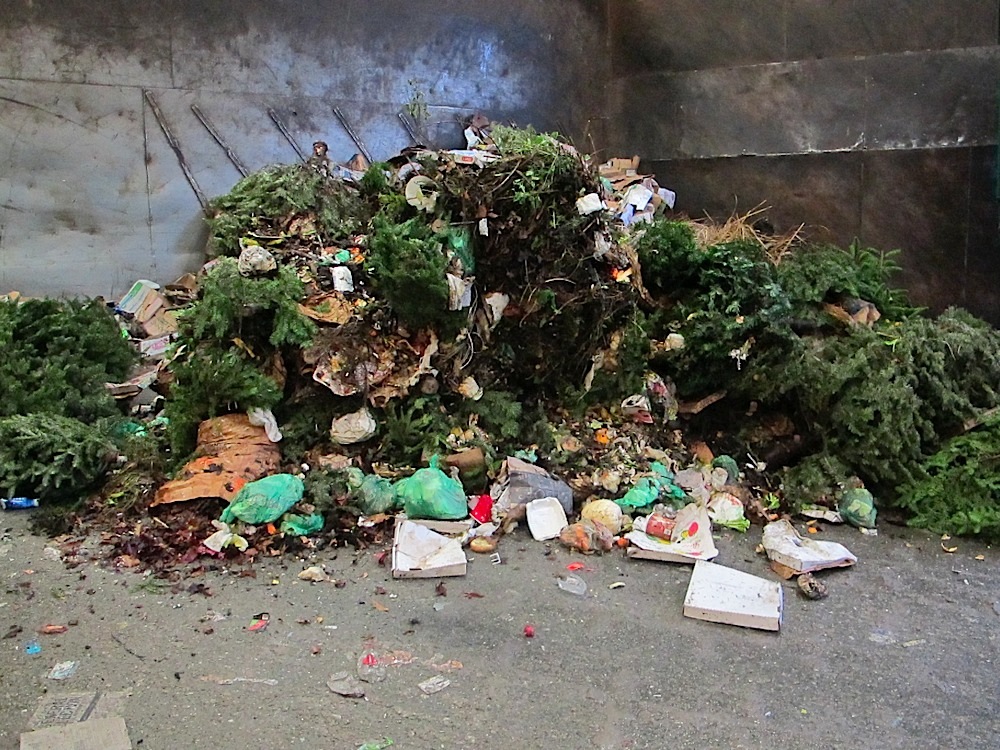 In 2009, Seattle expanded the program to include all food scraps, including meat, dairy and soiled compostable paper. The city also made separating food scraps from the trash mandatory for all single-family home residents.

“That boosted our curbside food-scraps collection program from 100,000 to 150,000 households,” says Brett Stav, senior planning and development specialist with Seattle Public Utilities, the department responsible for the city’s municipal solid waste. “Residents can choose to compost at home and opt out of the collection program. With the introduction of the mandatory program, many backyard composters shifted to curbside collection.”

The following year, 2010, Seattle began requiring all restaurants, coffee shops, food courts, cafeterias and other businesses that serve food to compost and recycle. “All food service products designed for one-time use (coffee cups, clamshell containers and other food packaging products) must be replaced with one-time use products that are either compostable or recyclable,” says Stav. In addition, businesses that have customer dining area disposal stations where customers discard single-use packaging must provide clearly labeled bins for compostables and recyclables.

When Seattle mandated composting for single-family home residents in 2009, for food service businesses in 2010 and for multifamily buildings and developments in 2012, the recycling rate enjoyed another surge.

The rate moved up from 50 percent in 2008 to 55.4 percent in. When Seattle’s 2012 numbers are published, the city could be close to the 60-percent recycling mark, thanks to the new push from multifamily food scraps.

How can food scraps have such powerful effect on recycling rates? Organic materials rank as the largest category within the municipal waste stream and food is the largest component of the organic waste stream.

In 2010, Seattle conducted a residential waste composition study that pegged food at 28.8 percent of residential waste. The next largest component was animal by-products, which made up 12.8 percent of the waste stream, less than half the share of food. The pattern holds with multifamily and commercial food scraps from other waste composition studies. Food is a huge component of the waste stream. That’s why diverting food from the landfill provides a major boost to recycling.

The most recent estimates for food tonnage recovered from Seattle’s waste stream use data from waste composition studies conducted in 2008 (commercial) and 2010 (residential). Applying data from those studies to 2011 collection data, analysts estimate food diversion rates as follows:

So it’s clear that food waste diversion is Seattle’s path to boosting its recycling rate to 60 percent.

A lot more food waste is in there, waiting to be separated from the waste stream and composted. 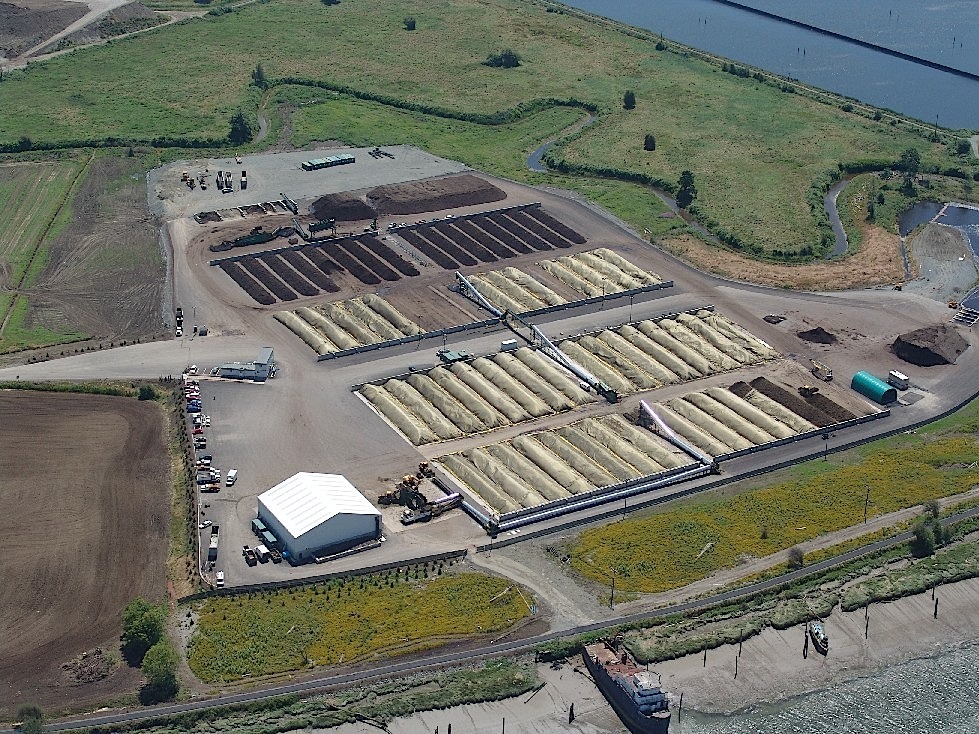 Cedar Grove Composting, Inc. strictly manages what it allows into its facilities. “We collaborate closely with cities, counties and haulers to make sure they are clear on what we accept,” says Susan Thoman, the company’s director of public affairs and communication. “We accept clean green waste, pre- and post-consumer food waste and compostable food service packaging.”

The company accepts 2,000 tons of materials per day and sends it through a processing system by way of Westec Overland Conveyor System that drops materials into Diamond Z grinders, carries them to Komptech star screeners and McCloskey trommels. The processing system cuts the materials down to compostable size and screens out anything larger than 7/16 of an inch. 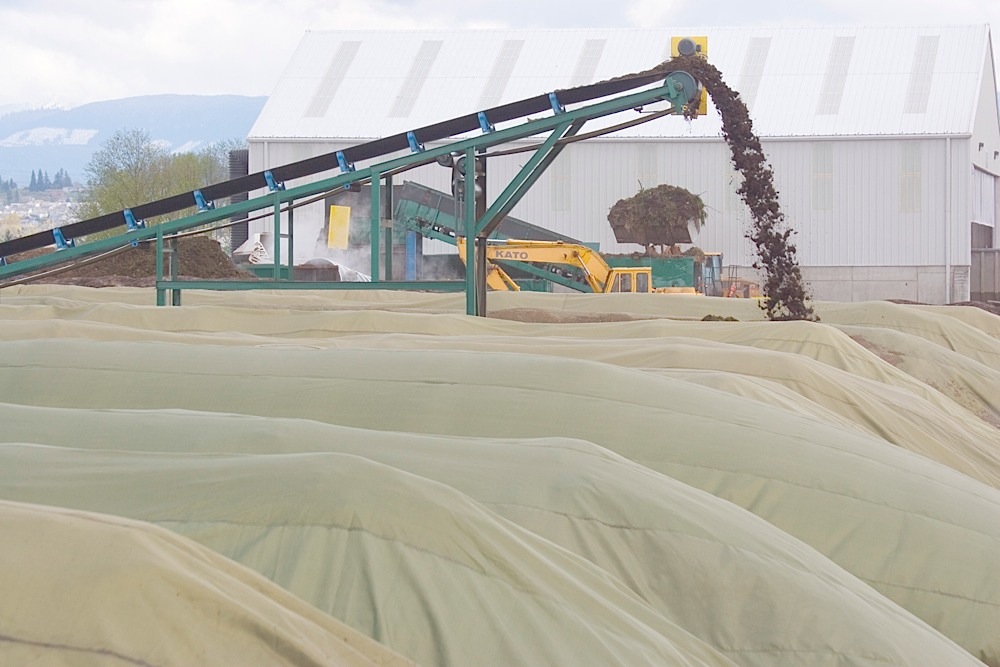 Once prepared, the feedstock is loaded into a pad area, which contains two parallel trenches with thousands of perforations. The material sits on a cover that supports it over the trenches. A Gore Cover System — an organic blanket — covers the material. Oxygen and temperature probes fit through openings in the cover.

The cover is so tight, according to Thoman, that the system qualifies as an in-vessel system. The probes control the temperature and aerate the pile when necessary — through the perforations in the trenches.

In a conventional windrow system, temperatures in the compost rows rise to around 130 degrees. Cedar Grove’s system, however, reaches 170 degrees and does the work of creating compost faster, says Thoman.

Cedar Grove processes the material for eight weeks and then ages it and screens out contamination.

Gardeners, landscapers and farmers are among Cedar Grove’s many customers.