Since its introduction in the Oakland, Calif., school system in 2009, Green Gloves, a unique composting program has grown steadily to include nearly half of the district’s 98 schools. But what started as a program to teach kids also has proved to be an education for parents, teachers, custodians and nutrition staff. 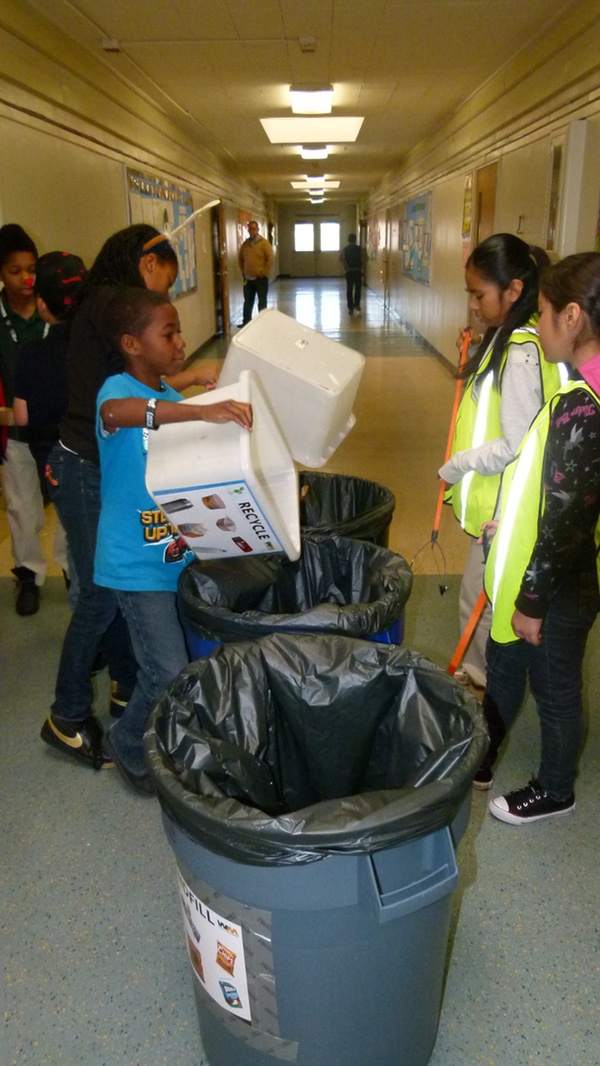 Nancy Deming has been instrumental in that success, as Green Gloves/Sustainability Initiatives program manager for the Oakland Unified School District. But she started as a parent with a daughter in elementary school and a desire to bring more sustainability to the district. In the early days, she didn’t like what she saw.

“I was beside myself,” she says. ”If you’re out on the playground or in the cafeteria you didn’t have a choice there. It was one single gray trashcan. I was frustrated for the school not to be able to teach these kids these important lessons and for the schools themselves not to be able to separate out their waste appropriately and save all those resources.”

The school district established a mixed recycling program that proved successful. About three or four years ago the district took on composting as well with about 20 schools starting programs. Houston-based Waste Management Inc. worked with the schools, but efforts were limited because each school was working independently without any district-wide infrastructure.

A brainstorming meeting including Waste Management, the Alameda County Waste Management Authority and the district custodians director determined that the program would be more successful if it got the custodians more involved. That led to a symposium for custodians and the Green Gloves program to recognize exceptional effort in that area.

At the same time, Deming says, “I realized a lot of the issues were coming out of the kitchen.” The district’s nutrition services director committed to working on those issues.

There now are 43 schools separating out their cafeteria food scraps at lunchtime. The composting programs are well established in the kindergarten through grade five schools, and taking root at a few middle schools and two high schools.

“We want to get them at an early age and get those habits formed early,” says Deming.

It has been a challenge convincing the custodians to buy into the program, says Roland Broach, director of custodial services for the district. “One of the things custodians often say is recycling is more work,” he says. “We have to sell them on the fact that it’s not more work, it’s actually less work because you have support from the other groups as opposed to you doing it yourself.” 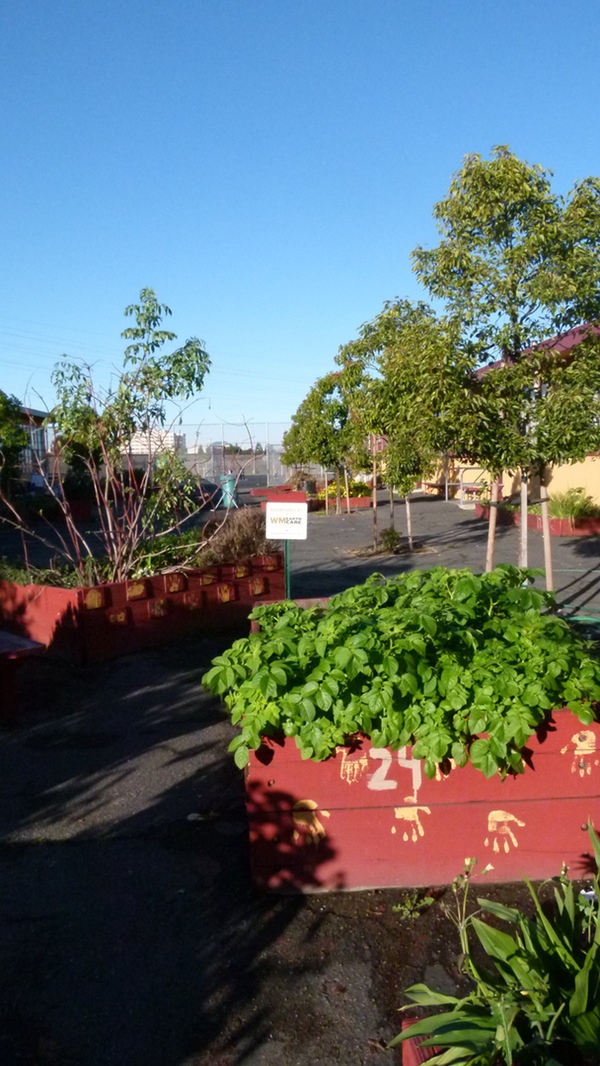 He says it’s an ongoing selling process that continues today with the union. The district has 230 permanent custodians and another 75 substitutes. “The union is in support of the program, but there’s still a lot of work to do. You’re trying to change the mindset.”

Deming says staff supporting the program worked to assuage custodians’ fears about taking on another project. “We wanted to show them that it can be a positive thing for them to take on, that it can actually lighten workload, and they can interact with students directly in a meaningful way.”

Program administrators addressed issues like signage, correct bags and color-coded buckets. And they worked to improve communication between custodial and nutrition services and the school administration.

The children have liked the program – once they get past that habit of tossing their food and running outside immediately. “There’s definitely a learning curve,” says Rebecca Parnes, recycling program coordinator for Waste Management. “But one thing that helps is there’s already been a lot of waste reduction education both by teachers and also through county waste reduction and recycling curriculum. This is a great way for students to take action on what they’re learning about.”

The children often take the program home and get the whole family involved. The schools also have student monitors for the program, and that can be a reward for students particularly motivated by the program.

And the kids have indeed made work easier for custodians, Broach says. “The students have been fantastic.”

Deming has emphasized waste reduction with the program as well, such as encouraging children to eat all their food. They also eliminated spork packages that include the spoon-fork utensil, a straw and napkin. Now the schools use separate dispensers for utensils and napkins, since kids were tending to use the packages for only one of the items and throwing the others away. It also helps with the sorting, Parnes says, because the straws were narrow, requiring more time to drain milk cartons, consequently causing many to be discarded with remaining liquid. Now students drink directly from the carton, more often resulting in empty cartons and less soggy sorting. 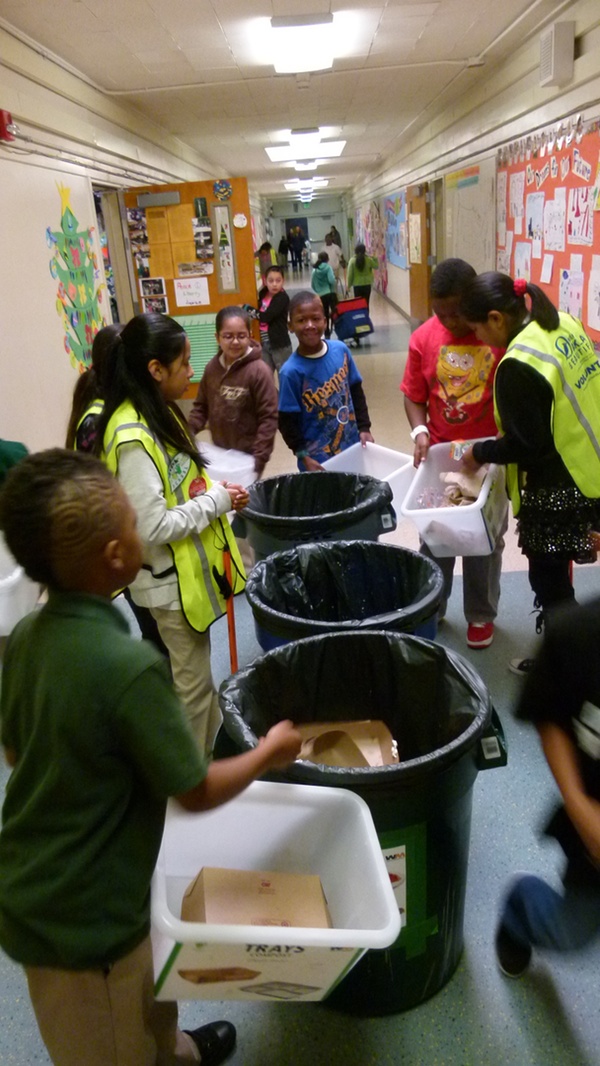 The district also pilot tested waste-free lunches for six classes, and it plans more in the future. The lunches included a field trip to a sustainable agricultural park and focusing on a composting lesson plan. Food was prepared and packed so that it was kept cold without condensation onto unwanted items, while salad dressing was provided in resusable bottles.

The school administrators are pleased that enough people took the initiative to develop a comprehensive plan, and that it gives students responsibility, Deming says. “We’re reducing our waste, and students and staff are having a direct tangible impact on all that.”

Custodial staff buy-in also is key because they handle waste at two points – during lunchtime with the children, but also in the evening with a final cleanup and recycling opportunity, Broach points out.

Custodial and nutrition services staff move around a lot in the system, Parnes says – particularly custodial staff. That can hurt continuity in some cases, but it also can be a positive, fostering cross-pollination of the program. Green Gloves-trained staff relocating to a new school can champion the composting program there if it doesn’t already have one.

“We want to see the program become the norm,” she says. Whereas now the district gives recognition to staff excelling with the program, “hopefully in five years we won’t need to celebrate it because it’ll be the same as any aspect of your day-to-day work.”

Nutrition services also provides input on optimizing the waste stream once Green Gloves is established in a school. Deming cites the example of one school replacing plastic water bottles with hydration stations and compostable cups. “Now we can improve on it and take it to other schools.”

Parnes and Waste Management want to see the program foster long-term behavioral change, and Parnes says she’s already seen signs of it. Custodians now are shopping for products for the school with a more sustainable mindset, for example.

“It’s important for students to learn the behavior early on, to go on to college and come back to part of city of Oakland’s zero waste goals,” she says. “We see the school as the incubating area for zero waste behavior and zero waste change.”