Insights and Scenes from the 2019 NYC Food Waste Fair 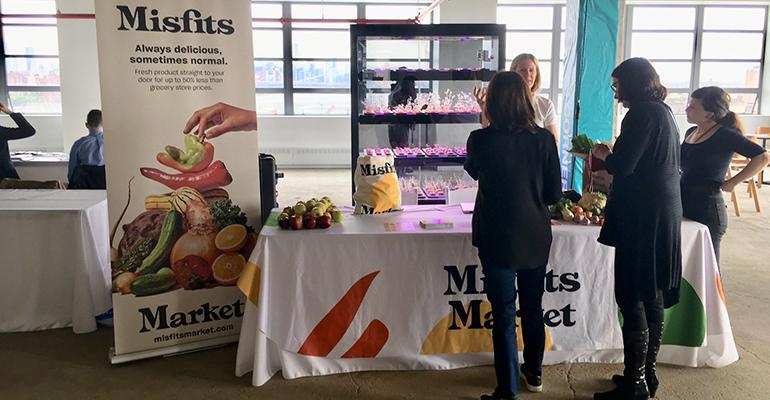 Food, beverage and composting professionals, along with refuse haulers, gathered on May 23 for the City of New York Department of Sanitation’s (DSNY) Foundation for New York’s Strongest 2019 Food Waste Fair at the Brooklyn Navy Yard.

The annual fair aims to connect attendees with resources to help them reach their food waste prevention and sustainability goals. This year featured various food waste workshops and panels, more than 70 exhibitors and culinary experts competing to create “the ultimate zero waste dish.”

From guest speakers, to panels, to exhibitors, to cooking demos, today's @StrongestNYC #nycfoodwastefair has it all. Food businesses are learning how to reduce food waste, making connections to have "leftover" food feed the hungry, or when not usable, recycle it! pic.twitter.com/HVBkpgnyGh

But it was really the panel sessions held over the course of the event where attendees got firsthand insights and best practices from a wide range of industry professionals. Here are some of the key takeaways from those panels:

A panel titled “Reducing Food Waste Along the Supply Chain” focused on mindfulness and creativity when it comes to food waste prevention. Panelists for this session were Taylor Lanzet, director of supply and sustainability at Dig Inn; Andrew Shakman, CEO and founder of Leanpath; and Mike Wurster, head chef and culinary director of the Northeast region for Google.

Lanzet, who has been working for Dig Inn for the past four years, said part of the company’s mission is to use "ethical food grown with care." She added that Dig Inn uses roughly 8 million pounds of produce a year—20 percent of which is an imperfect, blemished product.

Shakman started Leanpath 15 years ago to focus on food waste prevention, and during the company’s infancy, he noted that many denied food waste was even an issue. “Over time, we saw that food waste was a nexus issue that grows from above, and if you work on food waste, you tackle issues like water usage and land use.”

Wurster explained that the region he serves feeds hundreds of thousands of people a day. “So, the decisions we make every day matter,” he said.

Wurster works closely with Leanpath to leverage data to better serve his region. “We have an understanding of where we can be more efficient and where we’re being wasteful,” he said, noting that Leanpath has helped with the issue of efficiently feeding a lot of people every day while also reducing waste.

When it comes to the term “zero waste,” Shakman said he’s a real skeptic. Instead, he offered the idea of a “waste-minimized world” and keeping mindfulness at the forefront in commercial and residential kitchens. Wurster also pointed out that it is important for chefs and generators to be thoughtful and creative with food.

“Think about what that product looks like in the field when the farmer actually picks it," he said. "There is already 20 percent loss in the field. That, to me, is the responsibility of the chef. If you create and bring something to the forefront, it has that ability to effect change.”

Regarding some of the obstacles she has faced in the food industry, Lanzet said material packaging is a biggie. She referred to packaging waste in the produce industry as “shocking”—calling out everything from waxed cardboard boxes to an excess of plastics. “I just feel that sheer amount of volume of plastics and waxed cardboard really needs to be addressed,” she said.

“One-third of the landmass in our world today we use to grow food,” he said. “At the same time, so much of that food is not consumed. How can we work together to consume 100 percent of it? Whatever produce we grow, we must consume. That’s the goal.”

McQuillan added that in the U.S., 21 percent of fresh water is used to grow vegetables that go unconsumed. He also added that 21 percent of landfill volume comprises food that “we chose not to consume,” yet one in seven people in the country are food insecure.

Lettieri noted that RTS puts heavy emphasis on data and training to generate “clean food waste,” meaning non-contaminated material that is processed as compost or energy. Thorburn said her company focuses on using bokashi, a method that uses microbes to ferment food waste and condition materials for the next stage of composting.

Moss explained Waste Connections is the only publicly-traded hauler in New York City, adding that the company has put particular emphasis on safety for employees and people in the city, infrastructure and transfer stations and new food collection trucks.

Nurse noted that BK Rot is a microhauler that runs curbside services for small businesses without a lot of space. BK Rot typically picks up clients’ food waste three times a week and offers customers toters with compostable liners for their waste collections.

Reali also said Royal Waste offers customers 64-gallon toters or 32-gallon toters that can be serviced daily, if needed. “The whole program is designed to handle food waste efficiently and properly,” he said.

When it comes to conducting waste audits, Lettieri noted the importance of educating customers on what is possible to divert from landfill or incinerator. “It’s a constant process,” he said. “You have to understand what is going on in the container. If you contaminate what’s in the container, it drives costs.”

“[Audits are] a really important way to manage contaminants,” added Lettieri. “Going out and seeing that waste in person and relating it back to the customer is something we put a lot of focus on.”

Nurse also encouraged anyone generating food to conduct an audit to better understand what they’re paying for and how to offset their costs.

Reali reiterated that education is key when it comes to managing contamination in the stream. “We have a great sustainability team that goes to customers and educates them on best practices for recycling and diversion,” he said. “That information is collected at night from night supervisors, who relay that information back to sales. It’s really a team effort.”

Then, in a session called “Waste Management Presents: What Happens with Food Waste?,” representatives from Waste Management delivered a behind-the-scenes look at the company’s Brooklyn CORe process and facility as NYC’s local solution for food and organics.

Dan Hagen, Waste Management director of business development for CORe, and Jim Van Woert, director of diversion strategies for Waste Management Greater Mid-Atlantic, explained that the facility, within its existing Varick Avenue Transfer Station solid waste transfer premises in Brooklyn, was built in 2016 and is the largest provider of food waste recycling for DSNY.

The slurry is delivered to the NYC Department of Environmental Protection’s Newtown Creek wastewater treatment plant. It’s added to the plant’s anaerobic digestion system to increase the production of methane delivered to the natural gas distribution system. WMNY explained that the process has helped the city recycle more than 60,000 tons of food and organics since opening in 2016 and has an annual inbound organics capacity of 156,000 tons.

The @StrongestNYC Zero Food Waste Challenge has begun! NYC Chefs are competing to see who can make the most tasty "zero waste" dish! It's part of the #nycfoodwastefair. Learn more at https://t.co/ROmDGFlD1f pic.twitter.com/wk3dlC2ljG

Flip through this gallery to check out some of the exhibitors and even more highlights from the 2019 Food Waste Fair.