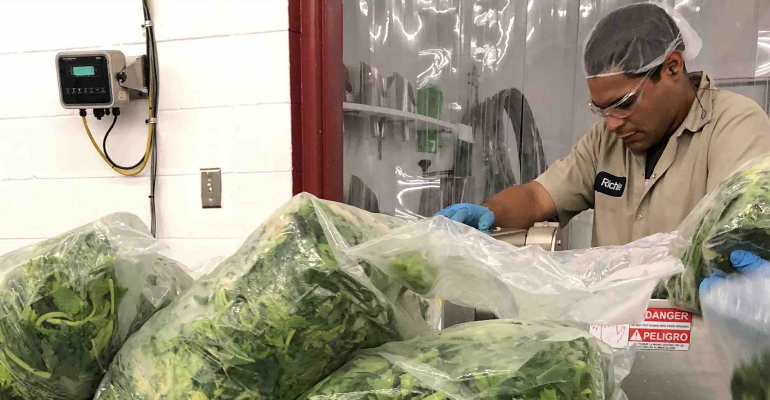 Eighty billion pounds of good food is tossed in the U.S. each year, including 20 million tons of produce that never leaves the farms, simply because it is not pretty enough for grocery store shelves or restaurants’ dishes. Or it’s wasted because it does not fit well in standard-size packages. So, most of it moves on to landfills to rot.  That’s a snapshot of the food waste story from a high-level.

But Anna Hammond, CEO and founder of Matriark, has gotten a down-in-the-trenches, pretty intricate look at what is happening, at least in the Eastern United States where she works to address problems around both food waste and food access. Hammond has grown a robust network of partners along the food supply chain, who turn would-be waste streams into revenue while providing good nourishment, and at scale.  Matriark salvages and makes product from 1.2 million pounds of surplus or trimmings a year that are sold to schools, hospitals, and other institutions with cafeterias.

The inspiration to launch the company grew from Hammond’s experience running a healthy eating program for low-income residents of New York City that included field trips to a farm that routinely discarded surplus, despite efforts to find a home for it.

“We partnered with food banks to collect the surplus, but they had limited storage capacity. So, there was limited access to healthy ingredients, particularly in food deserts, and there was also this food, with no great business model to preserve it and turn it into products that could be shelf stable,” Hammond says.

When she launched Matriark in 2018 she was working directly, and exclusively, with small to midscale farmers in a couple of towns in Maine, making frozen purees from their surplus beets, squash, and tomatoes as well as broth concentrate.

Then Hammond branched out. She began buying remnants from fresh-cut facilities – food that gets cut away during the process of preparing products for cafeterias. She and her team began working with vegetable aggregators who collect from the farmers in order to simplify logistics. This has been key to being able to scale.   Equally key to scaling is figuring out best markets.

“We choose institutional foodservice operations to have the biggest environmental and health impact as we could provide nutrition to more people,” Hammond says.

Remnants from fresh-cut facilities and surplus from farms are shipped to Matriark’s warehouse. Each run is 50,000 to 100,00 pounds, which is cooked down and put in shelf-stable cartons by certified copackers.

About 75% comes from the fresh-cut facilities, and all that trim is more than people would likely figure. Less than a third of a head of celery or of an onion is actually used, for a couple of examples.

The “excess” adds up. Matriark works with a fresh-cut facility that generates about 300,000 pounds of fruit and vegetable remnants a week. Hammond’s group takes in a portion of that to make product like vegetable broth. One pallet of packaged broth diverts 1,500 pounds of vegetables from landfill and makes 80,000 servings of soup.

Hammond does not ask for specific ingredients but gets lists of remnants that these facilities already have and develops products based on what they generate in high volumes to be able to move as much as she can.

The 21st Century term that describes what Matriark does – “upcycling food” really is what our grandmothers did, she says. Doing it as a business entails more logistics and partnerships, and there’s some technology involved, but she says, “We are using nutritional byproducts of vegetable and fruit processing and farm surplus to divert waste from landfill. It’s using all parts of food for its highest value. And that was what our grandmothers did, which is waste nothing.”

A part of Matriark’s business is to educate – mainly to inspire fresh-cut facilities to think of their vegetable remnants as valuable food, not garbage, as well as to think about what went into making that food.

“We are getting the last mile out of vegetables that are already grown, harvested, cleaned, transported from farm to fresh facility, and lightly processed.

“So, we are using something that has already used up so many natural resources. Why throw out those resources of water, fertilizer, labor, and transportation when we can get as much as possible from them?” Hammond asks.

Hungry Harvest is a home delivery service for produce and grocery items that would otherwise go to waste. It works with both growers and processors and aggregates their excess for Matriark. The company has sold 70,000 pounds to Matriark since September 2020.

“It allows us to find a home for products that we may not be able to put in boxes we deliver to our customers. An example being broken onion rings that come out of a processing plant. The process naturally creates a stream of product that doesn't get sliced perfectly. When this happens, it's diverted into the waste stream. We couldn't use that in our boxes, but they work great in Matriark's broth,” he says.

Matriark’s mid-term goals are to acquire more foodservice customers, though Hammond had to pivot during COVID-19. To stay afloat and help with a huge hunger problem, she created smaller cartons sold at a discount to food banks and other food relief organizations.

“Food service is gutted for now because of COVID-19, but there will be more business some time next year, and we are working on acquiring customers when institutional foodservice returns,” Hammond says.

“We are working with large accounts in preparation for that time. If all goes well, we will be national by the end of next year.”