Food Rescue Steps Up Swiftly in Response to COVID-19 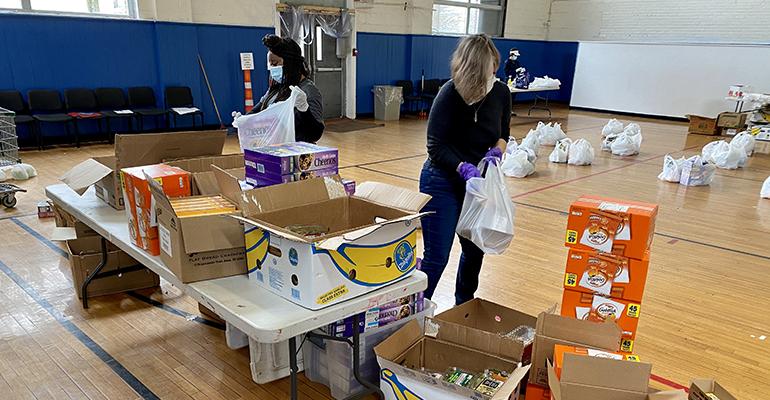 During the coronavirus pandemic, Lovin’ Spoonfuls is helping to provide food to those who need it the most.

When COVID-19 forced Cambridge Community Center in Massachusetts to close, staff started calling their youth program enrollees to see how they were doing and learned many of them needed food, so they began helping; within weeks, as more residents lost their jobs, the center was distributing hundreds of bags full of staples daily to hungry people, citywide, who waited for donations outside the gymnasium door.

The nonprofit agency was able to step up fast because of its longstanding relationship with food rescue Lovin’ Spoonfuls, which had been sending it food for a few families a week. Now, it delivers at least half a truckload a day, up to four days a week.

Cambridge Community Center is just one of 160 beneficiary agencies that Lovin’ Spoonfuls works with, and while many have closed as the pandemic spreads, there’s been an uptick in new organizations asking for support. And established partners that remain open are needing more.

“Pre-COVID, we picked up 75,000 to 80,000 pounds a week [mainly from grocery stores, big box stores and farms] and delivered them. We have seven truck routes. Now that we exist in this world, we are still operating all of them and able to recover about the same volume because our donors’ operations remain open,” says Lauren Palumbo, chief operating officer at Lovin’ Spoonfuls.

But while the rescue organization’s transactions look similar on paper these days, a lot has changed in how it operates. 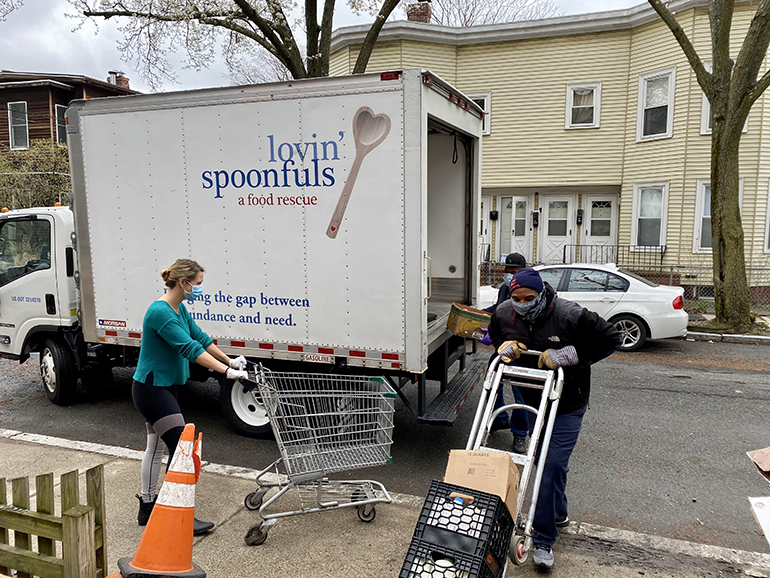 Food rescue coordinators, now clad in masks and gloves, have been taught to make contactless pickups and distributions.

They ask grocery store staff to bring food outside whenever possible. And when they deliver, they no longer hand off boxes one after the other; rather they leave them at the door, on the curb or whatever location the receiving agency designated.

While food rescue coordinators once worked in teams of two, each truck is staffed only with the driver to limit exposure.

“Since they no longer get physical help on the road, we are switching them off every other week for a mental health day or to work other projects to give them space to recover from the physical and emotional stress of serving a community in heightened need,” says Palumbo.

One of the biggest challenges, aside from keeping staff well, is scheduling. Before, schedules were usually the same through the week, but now, they change daily and sometimes by the hour as more agencies close.

“We have multiple team members making phone calls the day before delivery to ask, 'are you open?' Things change so quickly in this new normal; therefore, we constantly have to recheck and realign our schedules and reroute,” says Palumbo.

All of the office staff have been sent home with their computers and can access necessary software. They do a lot of Zoom calls.

While Palumbo still comes in to cut checks, she says there are few administrative tasks that cannot be done at home.

“As with any logistics company, having to work remotely is challenging. But we have team members with children and pregnant wives and want them to stay home and follow governor’s orders,” she says. 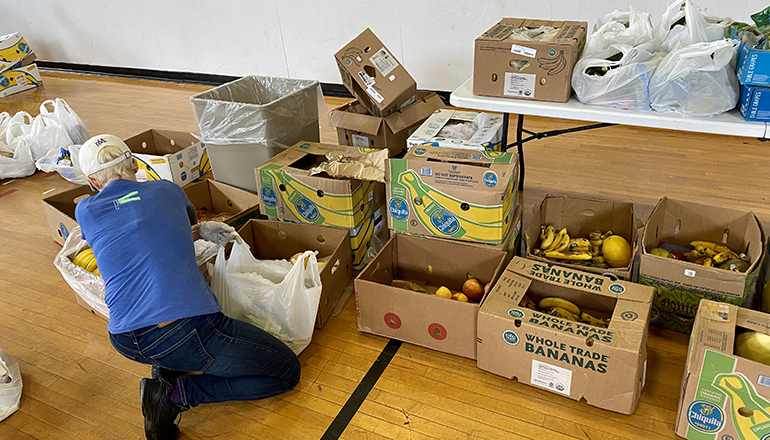 Lovin' Spoonfuls had to cancel fundraising events and is scurrying to get emergency funds as they become available, while looking for other additional sources.

Staff are asking existing donors who made pledges for later in the year if they could make them earlier. And they are looking at the federal payroll protection plan among other resources to keep going.

“There are no other projects we can work on now because it’s taking all hands on deck to figure out what to do now with schedules and routes changing day-to-day. Like everyone else, we just have to put everything else [we normally do] on hold as we get through this … I am buoyed by the fact that we have an incredible team making this all work,” says Palumbo.

“We have been around for 91 years, so we have generational connections with the most undersourced and underrepresented residents of Cambridge. We are happy we had such a strong relationship with Lovin’ Spoonfuls going into this because now we can get hundreds of pounds out to those who need it, very fast,” he says.

“Our partnership where they bring us food and our connection to the community is complementary. It’s incredible they allow us to provide this service,” he says.

When COVID-19 forced closures of restaurants and other foodservice providers, distributor Baldor Specialty Foods scrambled to find homes for its fresh produce, meats and dairy that would otherwise go to these business types.

“We donated full pallets to Lovin’ Spoonfuls. But they don’t have enough labor and trucks to accommodate all the tremendous excess that came in initially and were kind enough to connect us to food banks and other beneficiaries when we had more than they could handle,” says Shane Brunette, sales executive for Baldor Specialty Foods, headquartered in Bronx, N.Y.

“We don’t generally have issues with food waste as we go out of the way to be zero waste [through careful planning and various outlets for excess], but our food was on the road before restaurants shut down, and we had to find homes for it. While we’ve gained some balance since that initial punch [Baldor now sells and delivers to homes], we still donate tons of excess in a week. And Lovin’ Spoonfuls has been essential in making this happen,” says Brunette.

“They opened us up to their network, so the products we have are not going to waste but helping people who especially need it now,” he says.

Palumbo reflects on another trying and unusual time—the winter of 2015 when Boston had record-breaking snowfalls with snow piled in some places until July. But that experience pales compared to this one, she says.

“That winter, the roads were hard to get down, and some were closed. We saw empty shelves at grocery stores so there was less to rescue. Still, there is no crisis we’ve been through that’s remotely close to COVID-19, and hopefully there won’t be again. But this is our normal for now, and we are in training.”