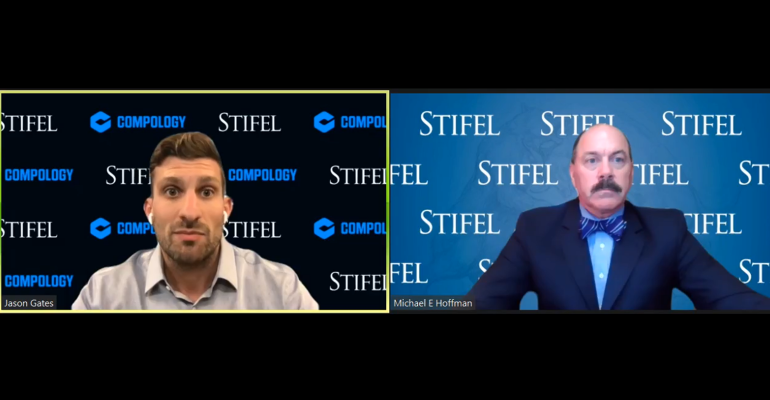 Compology CEO Jason Gates and Michael E. Hoffman, Stifel managing director, discussed how waste is one of the “perfect” industries to incorporate AI.

The right technology could enhance efficiencies within your business and lead to a healthier bottom line.

During a one-on-one conversation at the Waste360/Stifel Investors Summit, Compology CEO Jason Gates and Michael E. Hoffman, Stifel managing director, discussed how waste is one of the “perfect” industries in which to incorporate artificial intelligence.

Compology, which launched in 2012, installs cameras inside commercial and industrial dumpsters to “track the location, the fullness, the content and when service happens,” Gates explained.

The data gathered from this process is analyzed and used to generate revenue, cut expenses and enhance the customer experience. Gates began by defining the driver of the data: artificial intelligence (AI).

“At a very simple level, artificial intelligence is really just having a computer do actions that would normally be done by a human,” he said.

Hoffman asked if there was a viable frontline to direct labor not to replace workers but to improve on-route operations. Gates acknowledged that AI has "tremendous potential" in future applications and used safety as an example.

Video installed in truck cabs can identify and eliminate safety hazards. While reviewing footage had been a daunting, monotonous task for humans in the past, AI has stepped in to pinpoint these concerns and mitigate risk through driver training and other initiatives.

Another example of how AI be implemented is camera mounting on trucks to spot overages. This eliminates the need for a driver to document if a container is overfilled or if there is excess waste sitting next to the container.

Hoffman then questioned Gates if a program can be written in which AI can be used on a route to identify all of the containers in a location and automatically signal when to start and stop the truck and offload material, further enhancing efficiencies for even best-in-class operators.

Gates responded, “I think there’s certainly an opportunity for that, but we’re not quite there yet. We’ve seen great innovation from equipment manufacturers to date who are using automation already – one button press and the automated sideloader is running its routine – but we haven’t gotten to the point yet where the truck is sensing its environment around it and driving that route automatically.”

However, the waste industry would be an ideal candidate for testing self-driving technology, he added. Service routes tend to go unchang ed from week to week, trucks are operated at relatively low speeds and there isn't a lot of traffic from other vehicles, which makes it ideal to introduce AI technology.

Hoffman then inquired about how AI is economically viable and asked about the paybacks of such implementation.

While there has been an upfront purchase of technology, AI has now pivoted to reoccurring subscriptions rather than purchasing additional technologies to add to trucks, Gates responded.

When adopting AI, testing it on one vehicle to systematically work out mistakes before rolling it out to an entire fleet is imperative, Hoffman surmised.

"When you've put your foot into the shallow end, you've learned about it," Hoffman said, "you've learned from your mistakes – because invariably everyone makes mistakes when they adopt new technology –and then you can continue to incrementally add it all within reasonable budgeting, is that what I'm hearing you tell me?"

Artificial intelligence does not need to be an "all or nothing" scenario, Gates agreed.

Pitfalls on the AI Path

With more companies going down the road to automation and digitization, there are downsides to implementing AI. Hoffman asked Gates what to keep in mind while exploring the introduction of new technology into a business model.

A major misstep often seen in AI adoption is assuming the technology is plug-and-play, right out of the box.

"One of the biggest areas that we advocate in our customer base is to invest in the initial configuration of the technology," Gates commented.

Expecting immediate, lasting changes without doing the work upfront to ensure the technology is configured for specific business needs isn't the best route to take. It won't eliminate the time spent fixing mistakes the software makes once it is rolled into the workflow.

"Oftentimes, having an implementation consultant is a really efficient way of implementing the technology, someone who has specifically used the tool before and is there to guide in the process," Gates said.

Many software companies now have built-in "customer success" teams that are trained to generate value from these products.