How One Hauler is Making Glass Recycling Work 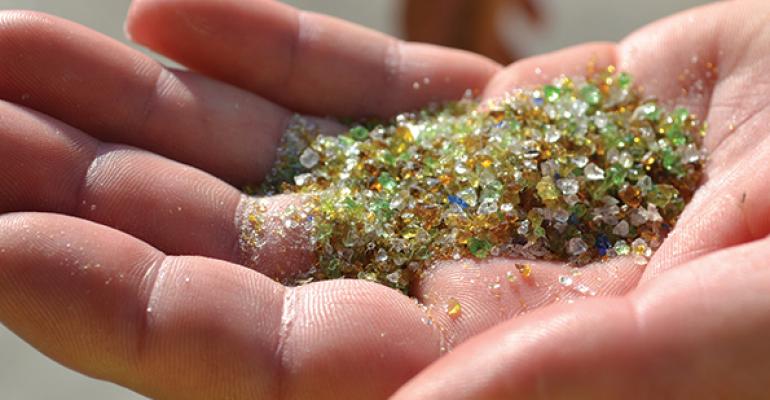 As prices for plastic, paper and metals soared, legions of trash haulers kicked glass out of their curbside collection bins. They didn’t see the reward in handling a heavy and messy commodity that wasn’t filling their tills.

Rumpke Waste and Recycling, however, opted to hang in there with glass. And the Cincinnati-based company is now an integral player in Ohio’s efforts to fuel its glass-deprived manufacturing base by keeping what’s touted as the original recyclable out of landfills.

“In a world that’s saying get rid of glass recycling, we have a success story,” says Steve Sargent, Rumpke’s director of recycling. “It’s a daily challenge for us but we still think we made the right decision.”

In 2004, Rumpke built its Dayton Glass Processing Facility to create a consistent market for its Midwestern service area. Through 2011, it shipped about 40,000 tons of mixed-color glass, processed to be no larger than a grain of sand, to the fiberglass insulation industry annually.

During that time, the Ohio Environmental Protection Agency was developing a strategy to stop Ohioans from tossing 90 percent of their glass in the garbage. A 2011 state-commissioned study revealed that Ohio manufacturers craved up to 295,000 tons of recycled glass annually—almost triple the 110,000 tons they were then receiving. Owens-Illinois, which crafts clear liquor bottles in Zanesville; Owens Corning, which makes fiberglass insulation in Newark and Mount Vernon; and Johns Manville, which produces fiberglass insulation in Defiance were among the largest businesses in need.

Rumpke, the only U.S. hauler that owns and operates a glass processing facility, recognized this sweet spot. That was incentive to upgrade its Dayton plant with optical sorting technology. A $3.6 million Rumpke investment—complemented by a $500,000 state grant—allowed the plant to also recover larger pieces of amber and clear glass for the container industry to turn into bottles and jars. Capacity doubled to 80,000 tons annually. 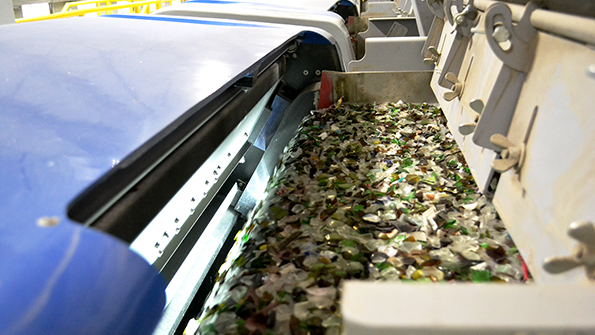 Sargent credits the Ohio EPA for much of that bump. Terrie TerMeer, assistant chief in the agency’s Office of Compliance Assistance and Pollution Prevention, was crucial in linking Rumpke with glass in a dozen of the state’s 52 solid waste districts. More connections are brewing.

“My role here is to establish relationships,” TerMeer says. “Rumpke is going to benefit and the state of Ohio has benefited.

“We have manufacturers who need glass and solid waste districts that have it. I want to identify a path forward so everybody can get what they need and want.”

By 2012, when the governor’s office urged the launch of a statewide glass recovery program, TerMeer had her bins in a row. She had already strategized with stakeholders and requested that study by DSM Environmental of Windsor, Vt. Her next order was figuring out how to feed more glass to Rumpke and the state’s other three hungry processing plants.

Knowing that a bottle bill was a no-go—Ohioans soundly rejected a proposed deposit program in the late 1970s—TerMeer focused elsewhere, dangling grants as bait. Statistics from the DSM study showed, per year, the state could collect another: 68,000 tons of glass by boosting curbside recycling; 53,000 tons by encouraging bars and restaurants to step up; and 14,400 tons by adding drop-off sites for residents of cities and suburbs.

“The reality is that there’s a lot of glass out there,” she says, noting that taverns and restaurants in tiny Marion County, north of Columbus, are now contributing about two-and-a-half tons of glass weekly.

Sargent emphasizes that internal control of the glass is crucial. Rumpke, a privately owned company around since 1932, has installed advanced technology at its own material recovery facilities so manufacturers can receive pristine cullet, the trade term for recycled glass.

For instance, shredded paper in the recycling mix is a headache of a glass contaminant. Rumpke has installed pre-cleaning equipment at its MRFs in Cincinnati and Columbus to scrub away paper and other clingy bits. The glass undergoes a second cleansing at the Dayton plant.

“What we sometimes overlook is education and how it goes together with accessibility,” Sargent says. “I can give you a container, but if I don’t educate you and you contaminate our load, we’re wasting our time.”

Lynn Bragg, president of the Arlington, Va.-based Glass Packaging Institute, points out that everybody in the recycling supply chain needs to exchange ideas about equipment, sorting and education to “unscramble the egg” of contamination. Prices for clean recycled glass have remained stable and even grown slightly over the last decade, making it a valued commodity, she adds.

“Rumpke has worked on finding a workable process,” she says. “What Ohio is doing could set a real example for other states.”