Each year, the computer and electronic manufacturing industry rings up close to $3 trillion in revenue. But at what cost to the environment?

The Portland, Ore.-based Green Electronics Council (GEC) engaged its stakeholders in a conversation centered on that weighty question in late September during the non-profit’s initial Emerging Green Conference.

Part of the three-day event featured the rollout of a report linking Earth-friendly stewardship with return on investment in the electronics industry. The research was conducted by Trucost, a London-based company that specializes in quantifying and valuing the environmental impacts of operations, supply chains, products and financial assets.

It’s encouraging that individual enterprises take eco-steps such as incorporating recycled content into their products, Jonas Allen, GEC director of marketing, tells Waste360 in an interview. But the council wants the electronics sector to grasp the force and financial benefits of circular-economy principles applied on a global scale.

“Years ago, there was lots of concern about greenwashing,” Allen says. “Our organization exists to make sure everybody is on the same page. We’re working toward a world where electronics are part of a more sustainable society.”

The council manages the EPEAT registry, short for the Electronic Product Environmental Assessment Tool. The voluntary standard had its beginnings 14 years ago when the U.S. Environmental Protection Agency (EPA) awarded a grant for developing a tool for an electronics environmental assessment via stakeholder consensus. Representatives from manufacturing, public and private purchasing, environmental advocacy, academia, government and the recycling sector collaborated on the project, which launched in 2005.

Companies meeting EPEAT standards can significantly reduce the amount of e-waste generated because their designs minimize hazardous substances and encourage recycling and reuse.

A few days after the conference wrapped up, Allen answered questions from Waste360 about the opportunities and benefits for greener electronics.

Waste360: This is your first conference. Why organize it now?

Jonas Allen: Our stakeholders are the electronics industry, recyclers, environmental advocacy groups and institutional purchasers in fields such as higher education, and federal, state and local governments. Seldom do all of these people focused on green electronics get together at the same time. The idea was to start a conversation about where to go next. The report isn’t a road map but it can be a barometer of where the successes are so far and where electronics can be made even greener. Our goal was for everybody to have a similar snapshot of areas where we could all improve.

We always knew we weren’t going to have thousands and thousands of attendees. We had 211. The idea was to attract a broad spectrum of folks primed to take action on the lessons we offered.

Waste360: This report bandies about the term natural capital cost. What does it mean?

Jonas Allen: It’s a fancy way of saying environmental impact. Usually, when you talk about manufacturing, the focus is on financial capital and human capital. This is a relatively new term to draw attention to the fact that resources that have to do with nature are at play. We have to think about mining, energy generation, water use and greenhouse gas emissions.

Waste360: Globally, natural capital costs in the computer and electronics sector are $39 million for every $1 billion in revenue. That measuring stick puts it behind two industries—telecommunications and financial; close to equal footing with apparel manufacturing; and quite far ahead of food manufacturing, utilities, mining, forestry and logging, oil and gas extraction, and chemical manufacturing. Can the sector keep that edge?

Jonas Allen: For all of that revenue generated, the industry is pretty darn efficient in its use of natural resources. What’s important is to make sure it keeps that efficiency. For decades, many devices have been getting smaller and smaller and smaller. We now have wearable computers. That miniaturization means less raw material is used and that’s a good news story because the environmental impact is lower.

But the flip side is that we’re buying so many more electronics that the total impact could be higher if we’re not careful. You look at people with three smart phones and ask, how much do we really need? These are consumerism issues. We have to be mindful that even if the per-device environmental impact is much lower, if you’re selling four or five instead of one, your total impact is higher. 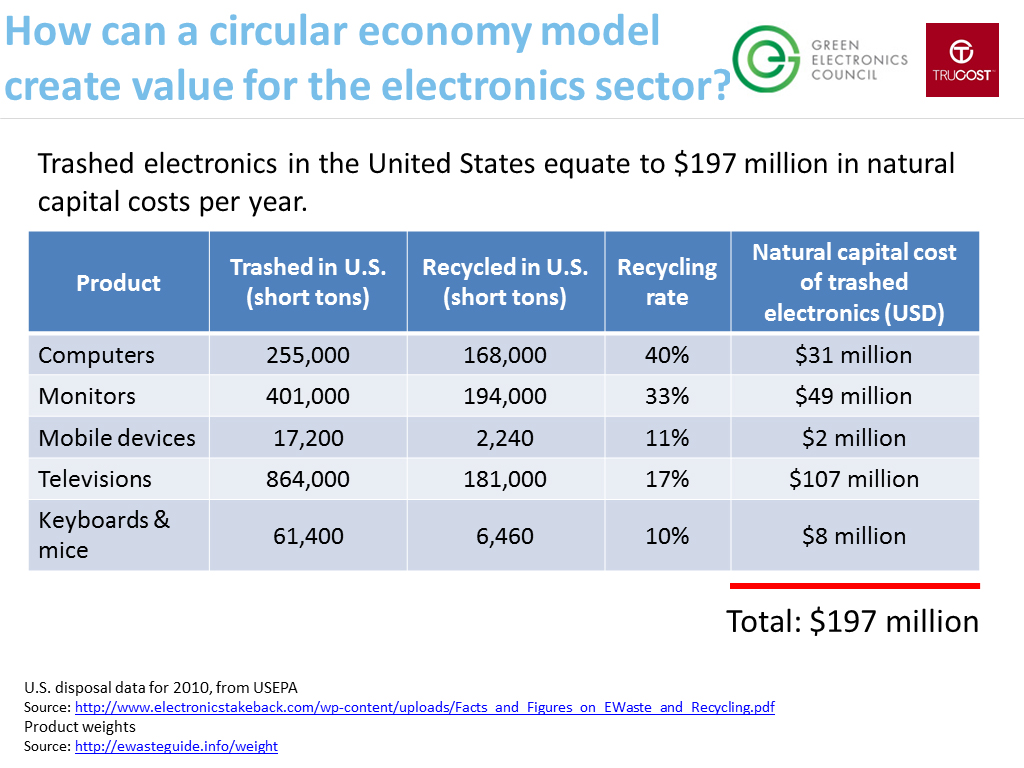 Jonas Allen: It’s disappointing that even with all the progress we’ve have made with recycling and take-back programs and resource recovery, there is more trashed than recycled in each of these categories. That’s discouraging. I guess what might be encouraging is that as much as we in the inner circles of recycling have beaten this topic to death, there are lots of people who haven’t taken advantage of it. Clearly, the community has more work to do.

Waste360: Where does recycling of precious metals stand?

Jonas Allen: Recycling 15 percent of gold and silver and 5 percent of platinum from electronic products provides $2 billion in financial and natural capital benefits. Those benefits jump to $12 billion if the recycling rate reaches 100 percent. Those numbers show there’s a lot to be gained financially and environmentally by closing the loop. Being pro-environment doesn’t mean being anti-business. Manufacturers making their infrastructure capable of meeting this demand can carve out a major niche for themselves. This is a business case for making that investment.

Waste360: The report estimates that the industry could save $2.5 billion if all electronics met the EPEAT gold standard. Is that shocking?

Jonas Allen: EPEAT is a voluntary program with rigorous requirements not a mandatory regulation. And the GEC, with 13 employees, can’t be policing the world. We don’t want to lower the bar on our requirements so our challenge is figuring out how to make our system more accommodating and bring more manufacturers on board. It’s not a lack of care on the manufacturers’ part because they are making great strides. There’s just a lot of legwork involved to register their products. As EPEAT expands into ratings for different devices, there will always be a big potential for improvement as the system reaches into new markets.

Waste360: How do you keep momentum now that the report is out and the conference has ended?

Jonas Allen: We’re still digesting it all, but we’re in the midst of formulating our key takeaway messages. We don’t want attendees to feel as if they’re drinking from a fire hose, so we’re trying to boil down all the ideas we gathered and present them in a pragmatic and practical fashion. We do know that our first conference was such a success that we’re already planning for another one.

Waste360: At your day job, you’re all about greening electronics. Does that mean you are plugged in 24/7?

Jonas Allen: For the better part of a decade, I ran a video game and electronics review Web site, so yes, even in my spare time I was all about electronic gadgets. But now I that I have two children in elementary school, I’ve started to step away a bit from recreational electronics. I didn’t want my children thinking that the whole world revolves around a screen so I’ve introduced them to camping, hiking, kayaking and exploring nature.

I wanted my kids to understand that electronics are important and can be very, very fun, but that’s not all there is out there. If they don’t understand what so great about the outdoors, how do I expect them to understand why Daddy cares about making electronics better for the environment?