Recycling for a Resilient Infrastructure 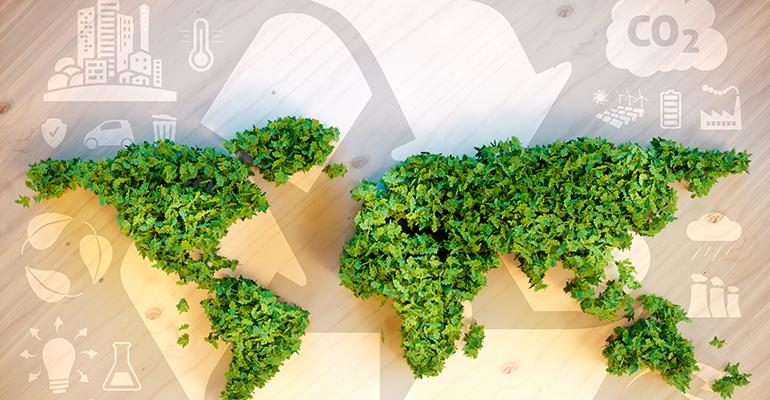 Unless the antiquated built environment in the U.S. is replaced with sustainable infrastructure, areas targeted by catastrophic events will continue to suffer.

Among the eye-openers of events on my phone this morning was a photo that could easily have been shot in another year on an equally humid and oppressive morning in the Ninth Ward of New Orleans. It showed a distraught young mother who was crying as she struggled to carry her baby and her toddler through flooded streets. Under the water, an unknown creature with questionable intentions brushed across her legs. It’s easy to feel the pain on her face.

We know how the story ended when the storm surge from Hurricane Katrina rushed in. The effects of Hurricane/Tropical Storm Barry are expected to be lesser. Nevertheless, Barry represents an unwelcome trend that is unlikely to end soon. Many lives already have been lost to catastrophic events in 2019. To be certain, New Orleans is hardly the only city affected by extreme weather this year or in the foreseeable years to come. Even more clear is this—unless the antiquated built environment is replaced with a sustainable infrastructure, these cities and surrounding areas targeted by catastrophic events will continue to suffer colossal damage at an immeasurable cost.

Floods, tornadoes, hurricanes and fires always have been devastating to local infrastructure and economies. For any given city, the intervals between this immense destruction were logged in decades or centuries, making them recoverable events overall. Indeed, during the recovery, ongoing improvements in design and materials were realized over time. Until recently, however, the idea of immediate “bounce-back,” or full functionality throughout a storm, wasn’t necessarily the intended outcome. For several related reasons, today’s destructive events have targeted certain areas with regularity and increasing intensity. These stronger recurrent storms make it cost prohibitive to continually replace the mass of structures; reconstruct the miles of roadways, tunnels and rail lines; and restore service to utilities, telecommunications and cyber networks. Not only is it unreasonable, it is impossible to evacuate entire cities on an ongoing basis because the current built environment is not designed to withstand the extreme weather.

With the certainty of climate change on the minds of U.S. mayors, resiliency and sustainability are no longer sexy buzzwords. They are the expected norm. As if that were not enough pressure, it just so happens that recycling is also on the mayors’ agendas these days, but not in a good way. The sudden loss of foreign outlets and renewed scrutiny of material quality disrupted commodity markets. Our approach to this has been predictably reactive, and it continues to trickle down to local governments. For some cities, the cost of recycling has more than tripled, and in others, the entire system has neared collapse. We’ve all done a good job pointing fingers at consumers, processes and producers. To modify behavior, there are a lot of sticks instead of carrots at play. In the process of overzealous enforcement, one wonders if our goals are morphing into the kind of opportunistic profiteering or excuse making that could tarnish recycling efforts for the long term.

That’s not to say that stakeholders at all levels are without blame. Contamination and current domestic capacity are real issues that we have long ignored and must be resolved. However, what if our limited aim is two or three rings off-center from the real target? In addressing the obvious, are we missing a window of opportunity that could change the role and importance of material recovery in our economic forecasts?

The value of recycling is being challenged at a time when economists predict the ongoing impact of extreme weather will trigger the collapse of our financial system. Research has shown that every dollar spent on mitigating impacts results in 6 dollars saved in future costs. Recognizing this, ratings agencies like Moody’s have begun to consider climate change risks in their credit analyses and ratings of public debt. Across the nation, aging and deteriorating bridges and water treatment plants pose a real threat to public health and safety and a drain on economic growth.

Several years ago, the American Society of Civil Engineers gave our existing infrastructure a grade of D+ and predicted that it will cost $3.6 trillion to bring our systems to a state of good repair. Sustainable infrastructure requires high-performance, durable materials that can be introduced into the built environment through design and incorporated during construction and maintenance with materials and techniques that are cost effective and with lower environmental impacts than today’s infrastructure. We already know that recycling commodities can play a role in products and applications that mitigate the impact of climate change. It’s time to change the way we tell our story to make that message crystal clear. More importantly, we need to be more strategic and consistent about where we focus our efforts.

A first step should be promoting proven applications of recycled content materials in the construction of the built environment and removing obstacles such as outdated contract standards, specifications and biases. For applications and materials where earlier results were promising but not convincing enough to be approved for widespread application, it is time to revisit the shortcomings with new technologies and variations of materials that might provide better results. We should be campaigning for investments in research to find new applications for recycled content alternative building materials for the purpose of enhancing the resiliency and cost effectiveness of the structures in which they are used. Of course, to avoid repeating the mistake advocates for recycled content products often make, the full lifecycle assessment of these products also should be favorable.

The functionality of roadways during a catastrophic event is crucial to emergency crews. Therefore, resiliency in road construction is an important investment. Although crumb rubber from tires has been used for some time as an asphalt modifier, the paving industry never really accepted it as a top choice because of its variable density and thus inadequate storage stability. That is unfortunate because asphalt with rubber has often tested with a higher resistance to cracking and aging. A good example of perfecting a previously attempted application is a public/private project being conducted by Iowa State University and Lehigh Technologies, a subsidiary of Michelin and coordinated under the REMADE Institute at the Rochester Institute of Technology. Iowa State has developed new technology that can better match tire density and is expected to produce an asphalt product that will meet storage stability specifications more acceptable to the paving industry.

Glassphalt is another recycled content roadway material using, of course, glass. Introduced more than 20 years ago, it remains a viable alternative to stone aggregates, but the cost of transport and processing is a factor. According to a story by Knight-Ridder Newspapers, glassphalt did attract at least one supporter, although with dubious reasons. In 1991, New York City used glassphalt to pave Fifth Avenue, which ran along the front of the Plaza Hotel. At the time, the owner of the hotel, one Donald Trump, was so taken by the glassphalt that he demanded this recycled aggregate mix be used in the pavement on the streets around all of his buildings in New York. To be clear, it was neither the recycled nature of the glass nor the resilience of the material under the stress of traffic and temperature swings that attracted Donald Trump; he simply liked how the street glistened.

Although glassphalt could not overcome the economic hurdles to replace aggregates nationwide, some diligent entrepreneurs continued to pursue mixed glass cullet as a viable alternative to stone aggregates in construction applications. AeroAggregates, a U.S.-based manufacturer of lightweight aggregate made from 100 percent recycled glass, produces an engineered foam glass aggregate that has applications in resiliency projects calling for lightweight fill materials such as those dealing with historic utilities that cannot withstand added overburden. Being lighter than stone, it has a unique logistical advantage.

Archie Filshill, chief executive officer and co-founder of AeroAggregates, makes the point that “We can take Philadelphia curbside glass and make a construction product that’s going right back into the city of Philadelphia.” That is a perfect example of circularity that we should be sharing as an industry with our elected officials instead of throwing up our hands and determining there is no use for glass.

Water is one the most destructive forces of a storm due to the associated complications of rotting, erosion, mold, decay, etc. Traditionally, “green infrastructure” has been viewed as the use of vegetation, soils and other organic elements to bring about more natural stormwater management processes. When it comes to environmental messaging, these organic solutions are most often discussed. It is our turn to promote the role of recycled content construction applications and building materials for healthier and resilient urban environments. We need to let legislators, engineers, regulatory agencies and the media know that these days “gray is the new green.”

That would be gray infrastructure with recycled content. HydroBlox is an exceptionally porous, high-strength plastic that can filter and direct the flow of water, using surface tension unique to the product. Manufactured from 100 percent recycled post-consumer plastics, HydroBlox planks maintain permeability and are easily connected into existing drainage infrastructure or natural aquifers that redistribute clean water filtered from debris and silts back into the environment. HydroBlox is capable of controlling the source, volume and treatment of stormwater. For recycled plastics, HydroBlox provides a viable domestic market while manufacturing a product vital to managing the increasing precipitation from storm events.

When it comes to winning stories, this one is a trifecta. The product uses recycled content material, reduces carbon emissions and also mitigates the effects of global warming. PittMoss is a peat moss replacement that falls into both the organic and recycled content category. It’s made with a unique engineered post-consumer fiber that has superior bio-retention qualities. Its physical properties stop stormwater run-off and manage the water more efficiently. According to the Rockefeller Foundation’s “100 Resilient Cities,” resilience looks for ways to make systems endure and even thrive in an imbalanced world. As an alternative to peat, PittMoss protects the world’s peat bogs, which serve as global coolers and prevent significant carbon emissions that occur when peat is extracted.

This is a small sampling of the research being conducted on college campuses and by entrepreneurs. Except for the project coordinated by the REMADE Institute, the other three companies received support from the Pennsylvania Recycling Markets Center. AeroAggregates also received funding from the Closed Loop Fund. Their success demonstrates the viability of recycled content building materials for a resilient infrastructure. It also illustrates the need for further investment, improvements to building codes and legislation to require the use of recycled content building materials in design and construction of public facilities.