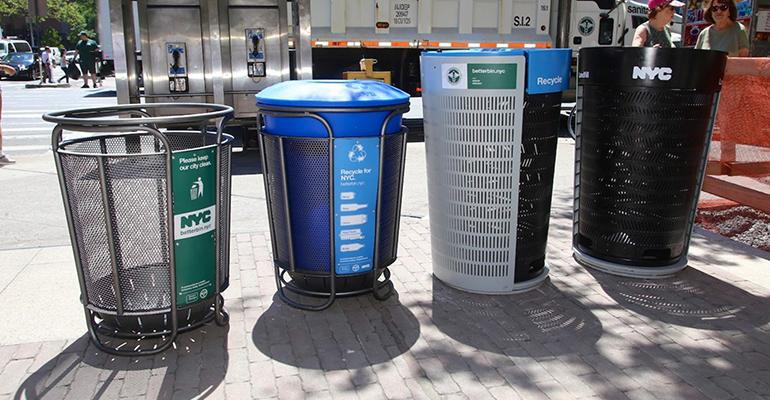 The redesigned basket prototypes will be in select areas on NYC streets for a minimum of 30 days before final judging.

The competition offered designers an opportunity to reimagine New York City’s iconic green, wire mesh litter basket. The redesigned litter and recycling basket prototypes will be placed in select areas on New York City streets for a minimum of 30 days before final judging takes place. Residents are encouraged to provide feedback on the design of the new bins at betterbin.nyc.

“We’ve been looking forward to seeing these newly redesigned litter baskets on city streets,” said DSNY Acting Commissioner Steven Costas in a statement. “City residents are our partners in keeping the city healthy, safe and clean, and one way they do that is by using litter baskets. We trust New Yorkers and our sanitation workers will put the new baskets through their paces and look forward to seeing the results over the next couple of months.”

The litter and recycling baskets will be on trial in three locations in the city—along 9th Avenue in Manhattan (between 43rd and 45th Streets), along Main Street in Queens (between Maple Avenue and Cherry Avenue) and on Castle Hill Avenue in the Bronx (around Newbold Avenue and Ellis Avenue)—and will replace the green, wire mesh baskets currently in those locations. After the prototype period, which may last up to 90 days, the judging panel will select a first-place winner based on prototype performance, public response and feedback from DSNY workers. The winner will be eligible to contract with the city for further design development to ensure the ability to mass-produce the basket at a reasonable cost, as well as refine technical issues.

The design team finalists include Group Project and Smart Design. A third company previously announced as a finalist, IONDESIGN GmbH Berlin, was not able to produce the necessary prototypes and is not moving forward in the competition.

“Given the rapid growth in NYC, addressing and improving the way residents and visitors handle their waste is critical to creating a clean, safe and sustainable city. Design is a powerful tool to help us rethink and engage with our environment in new ways. We are excited by the designs that rose out from the nearly 200 submissions,” said Van Alen Institute’s Director of Strategic Initiatives Jessica Lax in a statement. “This competition is an opportunity to be proactive in our response litter and recycling, and improve the quality of living of sanitation workers, residents and visitors. We anticipate these new bins to stay relevant in a modern city alongside other sidewalk innovations for the next 100 years.”

“From the street to the bench and even to the waste bin, AIA New York believes that innovative and excellent urban design at all scales can greatly improve the lives of people who live, work and visit in NYC,” said Benjamin Prosky, executive director for the AIA New York Chapter | Center for Architecture, in a statement. “We expect the winning design of the BetterBin Competition to contribute to the beauty of our city streets and to improve functionality by bringing greater ease to the maintenance work of those we rely on to keep our cities clean.”