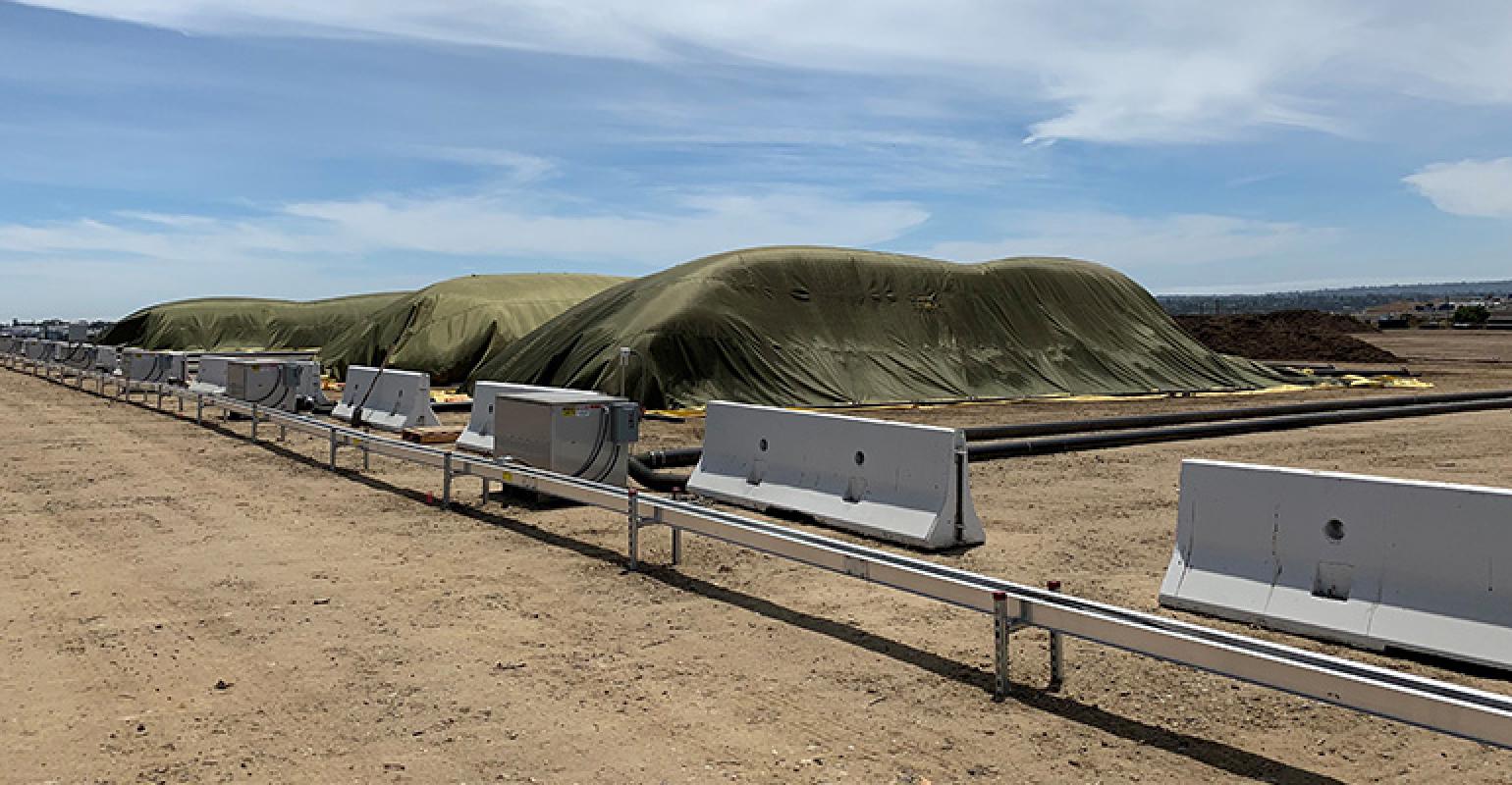 The city of San Diego has been composting on top of its landfill since the 1990s. But it has made some major system upgrades to stand up to two big challenges: increasingly tougher state organics diversion goals and big changes around rules impacting how the city went about processing organics to meet those goals.

“This technology is setting the bar for environmental compliance in terms of how leachate, stormwater, air emissions and greenhouse gasses are managed,” says Scott Woods, founder and CEO of Sustainable Generation, which provided the system that ESD operates.

The GORE system separates stormwater from leachate and does not generate processed water that has come into contact with leachate or other contaminants. This cover system encapsulates waste; odors and volatile organic compounds (VOC) emissions are destroyed.

Woods says his three most recent customers in California each achieved greater than 95 percent VOC reductions (greenhouse gas emissions) over their emissions with windrow, as demonstrated in their compliance testing.

The commissioning of the upgraded facility and performance testing were completed this past spring. Now it’s fully operational, and ESD is scaling to a capacity of 40,000 tons per year to include about 20,000 tons that could be food waste mixed with 20,000 tons of yard waste. 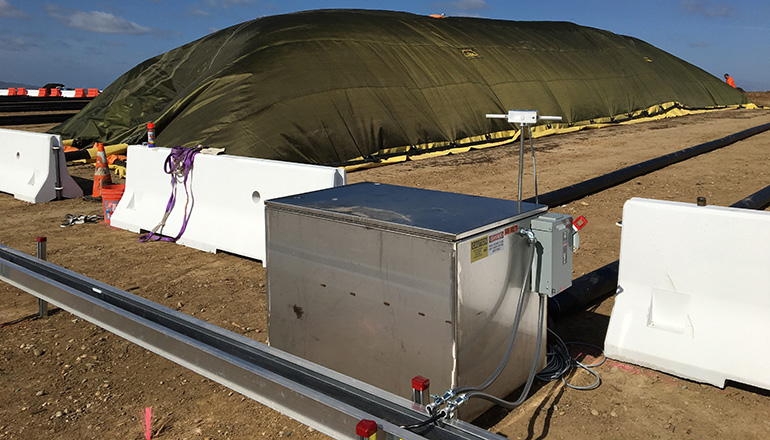 The project is expected to operate at full-scale by the third quarter of 2019.

The city actually first tested a GORE system in 2009, when it was evaluating different approaches to aerated pile systems.

Based on its dry, desert-like conditions, it was concluded that positive aeration with a cover would best assist with the parameters it was struggling with, which was mainly moisture content.

“Our rows were too dry. We looked at negative aeration that would push air to a biofilter. But we did not want to manage a large biofilter on the landfill surface, and we would still be struggling to have enough moisture for the system. So, with our operations and moisture in mind, we decided on covered piles,” says Robertson.

First, she and her staff wanted to ensure the technology was operationally feasible at their facility. Staff operated on a dirt deck while most operators used the technology on concrete.

“We learned through the pilot that the system could be employed on our dirt deck with our equipment. It was user-friendly, so our staff could easily operate it, and it would not require additional staff,” she says. 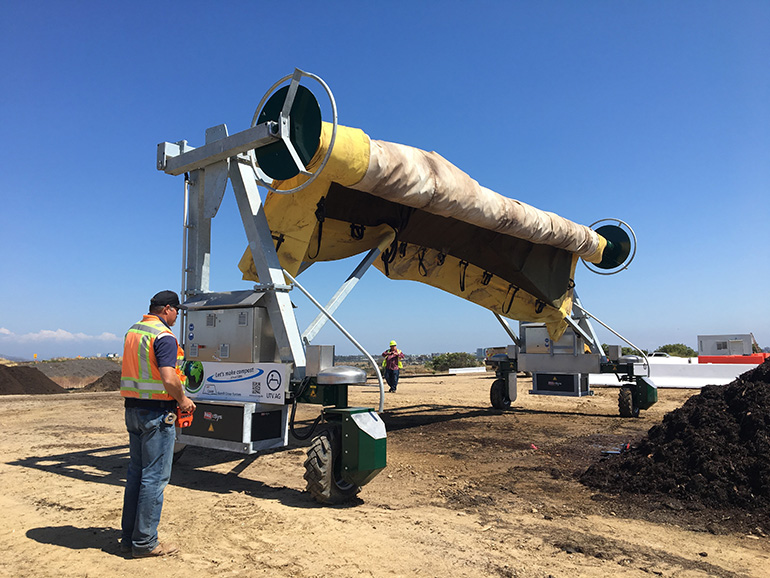 The city earned a $3 million grant from the California Department of Resources Recycling and Recovery (CalRecycle) to move forward with the project in 2017.

Woods, who has commissioned more than 20 GORE projects, is excited about installing them on these disposal sites. “Waste is already going to the landfill, but instead of putting it in a hole, we are putting it into reusable products, and it is being done without having to site a new location,” he says.

An additional feature that Sustainable Generation installed at Miramar is its Internet of Things (IoT) compost control system.

It’s a plug-and-play system where all integration of compost processes is done by computer. The technology speeds installation and startup of a facility. The software system also collects data and allows adjustments to be made remotely in real time, based on that data, such as around temperature.

“We don’t consider IoT to be a necessary component. But it’s an added bonus to able to remotely monitor, identify what may be a problem and address the issue,” says Robertson.

She says the city’s expectations moving forward are better management of compost parameters, in particular moisture, as well as oxygen that enables microbes to break down organics. 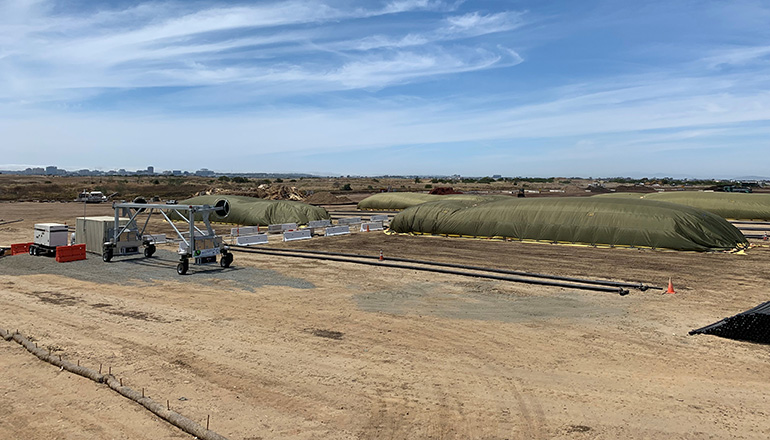 Ken Prue, recycling program manager for San Diego’s ESD, weighed in on how the operation, the largest permitted composting facility in the San Diego region, fits in with the city’s zero waste goals, especially as California aims to landfill no more than 11.5 million tons of organic waste by 2020 and no more than 5.7 million tons by 2025. CalRecycle estimates 75 to 100 new or expanded organic waste recycling facilities are needed to accommodate this material.

“The addition of an aerated static pile composting system was identified in the city’s zero waste plan as one of the key strategies to help increase the city’s waste diversion rate to 75 percent,” says Prue. “This system will enable the city to better process additional clean, separated food scraps that will come to the Greenery (compost site) because of increased collection efforts resulting from the implementation of California’s commercial organics recycling requirement. It will also help bridge an infrastructure gap until necessary privately operated anaerobic digestion facilities are developed in the region.”

All compost products produced at the Greenery are available to the public. Sales are approximately $500,000 a year but have been as high as $1 million.