The latest numbers are in for post-consumer prices for high-density polyethylene; PET beverage bottles and jars; and sorted office paper. On balance, prices haven’t moved much on any of the commodities.

The closing national average price reported in May was 30.9 cents per pound.

After a two-year roller coaster ride, the national average price has gradually returned to its current 33 cents per pound range, the same level reported in May 2013. 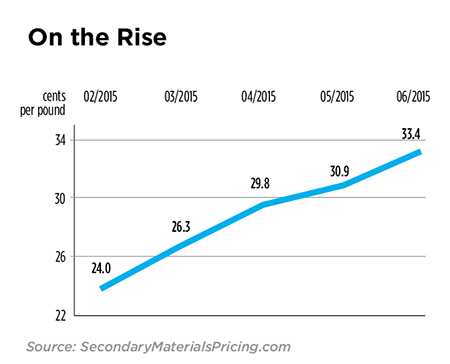 During the past six months, the national average price of post-consumer PET beverage bottles and jars remains steady, in the 14.2 cents per pound range (see graph).

This current price is in stark contrast to the reported average of 21.9 cents per pound in March 2014.

Furthermore, two years ago the national reported average for this post-consumer material was even higher, at 31.4 cents per pound in April 2013. 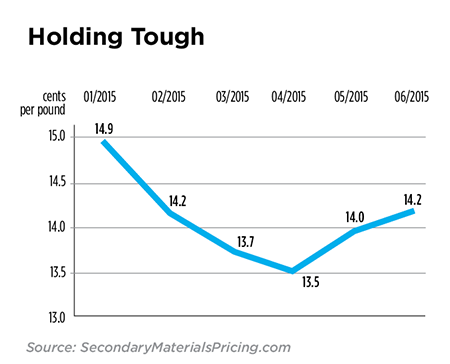 The price for post-consumer sorted office paper (PS-37) has remained steady at the $164 per ton level since February.

However, this represents a gradual average drop of $9 per ton during the past year.

Effective June 2014 the average trading price for this grade was in the $173 per ton range.

These published prices are for mill-size bales, FOB (freight on board) dealers’ plants, as reported on the Secondary Fiber Pricing (SFP) Index. 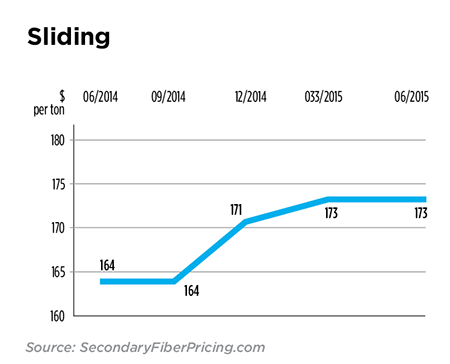 Robert Boulanger is currently president of Recycling Markets Ltd., and director of the Commodity Pricing division. He has extensive experience in the operation and management of recycling plants, and is a long time publisher in the recycling sector.