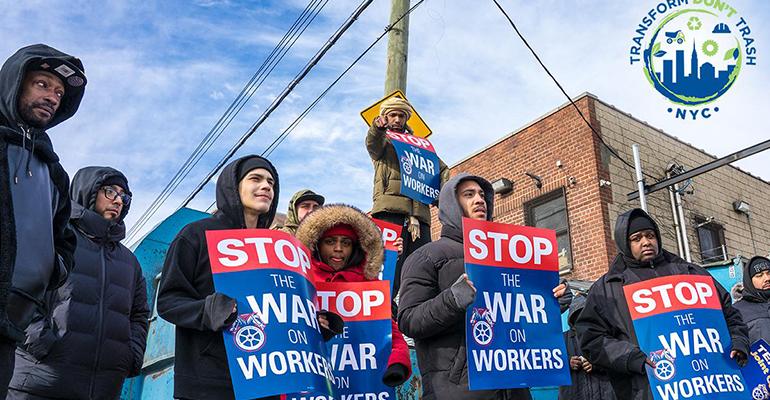 Advocates say a CWZ system would reduce greenhouse gas emissions and improve safety. Critics, however, say zones and franchises are not the right answer for NYC.

During a New York City Council Sanitation Committee hearing on June 27, city officials reiterated that the city’s current commercial waste industry is “unsafe, unfair and unsustainable.” The hearing provided advocates and critics alike of the city’s proposed commercial waste zone (CWZ) franchise system an opportunity to voice their opinions in front of the council.

Before the hearing, a coalition of New Yorkers rallied alongside City Council members for a bill to create a citywide CWZ system. The rally included sanitation workers and environmental justice, safe streets and small business advocates, who then testified during the City Council hearing on the waste zone legislation. In addition, there was a competing rally of small businesses and industry groups.

In May, New York City Council Member Antonio Reynoso introduced his version of a bill that would create a commercial waste zone system dividing the city into at least 20 zones with each zone serviced by one carter. This is much different and more exclusive than the plan initially unveiled in 2018 by the City of New York Department of Sanitation (DSNY), which stated the city would be divided into 20 zones, each served by three to five carters selected through a competitive process.

“For years, the private carting industry has operated with blatant disregard for the safety of workers and pedestrians and the health of our environment,” said Reynoso in a statement. "My bill, Intro 1574, will authorize the city to enact a commercial waste zone system to finally transform this industry for the sake of workers, communities and the environment. A zoned system will make routes drastically more efficient—this means improved pedestrian safety and a reduction of vehicle emissions equivalent to the removal of one in five cars off of NYC streets. Furthermore, in order to operate in one of these zones, companies must comply with stringent labor, safety and environmental standards. I have fought tirelessly alongside my allies to transform the waste industry, and I urge my colleagues to support this bill."

Advocates have maintained that a CWZ system will address the private carting industry’s “egregious practices” by requiring companies to comply with stringent standards to service waste zones. Critics, however, have continued to express their concerns about whether franchise zones are the right choice for the city. 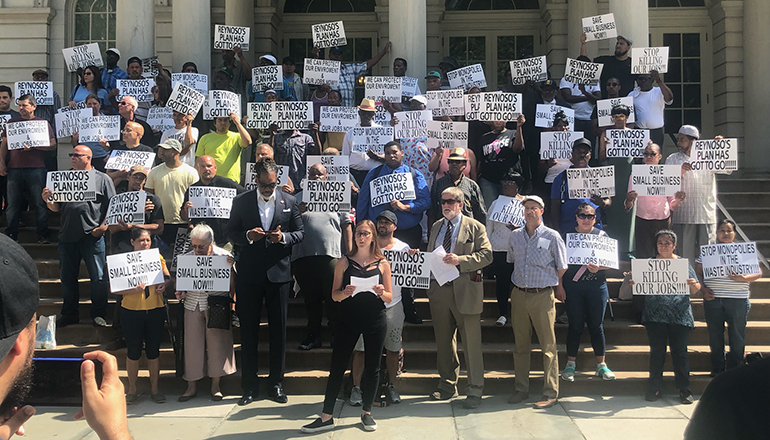 “After more than three years, the initial council hearing showcased the near-total lack of consensus about whether a zone system is desirable, and, if so, what kind—although the monopoly-zone idea was clearly dismissed,” says Kendall Christiansen, executive director for New Yorkers for Responsible Waste Management, a consortium of 25 locally-owned and operated waste service providers. “While some business groups reiterated their desire for choice and competition, there was no enthusiasm for DSNY’s untested multi-hauler zone system—and will be less so as more is learned about how it might actually operate, with a thousand details yet to be determined.”

During the public hearing, DSNY's Deputy Commissioner for the Bureau of Legal Affairs Robert Orlin highlighted safety and customer service issues within the city’s current system, but nixed the idea of an exclusive, one-carter-per-zone system.

“In an exclusive system, nearly all small- and medium-sized carters would be wiped out,” said Orlin during the hearing. “We spoke to scores of businesses and customers during the process and the message is clear: Choice matters. Customers demand high-quality and responsive service, and they want to be able to terminate their carter if the service does not meet their needs. An exclusive zone model would create a monopoly in each zone, eliminating businesses’ leverage and creating a lopsided power dynamic between carter and customer. In this monopolistic system, carters would have no incentive to offer less than the maximum price, and without pressure from regulated competition, service quality would suffer.”

Orlin went on to say that DSNY’s plan “preserves the element of choice, albeit in a more organized fashion than exists today.”

“Some businesses would prefer that we keep the current system despite the very real costs in externalities, such as air and noise pollution from excess truck traffic,” he explained. “But, as I hope you will hear from many today, the city’s plan seeks to achieve a balance between serving the needs of customers and achieving the other program goals. Lastly, creating an exclusive zone system puts a greater burden on the city and the department to regulate individual service agreements and resolve disputes, while our non-exclusive system allows the customer to fire their carter if their service is not up to par. In an exclusive system, the city would be forced to mediate each and every claim.”

Days before the hearing, one of many statistics from a newly released Transform Don’t Trash NYC Transitioning New York City report claimed that a commercial waste zone system could avoid up to 2 million tons of greenhouse gas (GHG) emissions per year. The report, “Fighting New York’s Climate Emergency with Waste Zones,” also noted that less than 25 percent of NYC’s commercial waste is recycled or composted now, which is lower than in cities with exclusive waste zones like Seattle, San Jose and San Francisco; Seattle achieved a 65 percent commercial recycling rate in 2017.

“There can be no more debate and half-measures on climate change. The time to transform New York’s commercial waste system to sharply reduce both greenhouse gas emissions and local air pollution is now,” said report author Justin Wood from New York Lawyers for the Public Interest in a statement. “A strong commercial waste zone system will avoid up to 2 million tons of CO2, eliminate 37 diesel truck trips to the moon and back each year and finally give our small businesses access to sustainable, affordable waste services while creating hundreds of good green jobs for New Yorkers. We’re far behind other cities, where we should be leading. Passing Intro 1574 will restore New York as a national leader on climate justice and sustainability.”

@NYC_SafeStreets “these companies don’t put money into the safety of their trucks and it kills people. This bill will fix that” #donttrashnyc #PassCWZforNYC pic.twitter.com/XXnb0VGZuL

The report also states that recycling and composting create more jobs than landfilling and that a robust CWZ system can create hundreds of high-quality green jobs in the NYC area while also ensuring that edible food and other goods find their way to New Yorkers who will benefit from them. In addition, a CWZ system is expected to save 18 million diesel truck miles a year, advocates say.

“The current system for commercial waste handling is an overlooked contributor to global warming. Roughly 1,100 diesel-powered trucks racing along city streets, spewing pollutants into the air and mixing food waste with trash headed for shipment to landfills where the organics are a major source of planet-cooking methane emissions,” said Eric A. Goldstein, NYC environment director at the Natural Resources Defense Council, in a statement. “An exclusive zone system, as this report shows, can slash these airborne emissions and transform the city’s commercial waste collection system from a renegade source of global warming pollution to a national model of sustainability and equity.”

Several major business groups, however, expressed their concern for and opposition to a CWZ system, particularly a more exclusive system, in a letter to City Council Speaker Corey Johnson two days before the June 27 hearing. The groups requested that the Committee on Sanitation and Solid Waste Management add Intro 996 to the public hearing agenda.

“We remain very concerned that the proposals for a system of zones and long-term franchises are not the best or right answer for New York City, and that responsible alternatives—such as that framed by Intro 996—should be considered,” the letter stated. “Despite more than three years of consideration, no consensus has formed as to how best to proceed, suggesting that any changes sought should be carefully considered and agreed to by all stakeholders, without resorting to a political struggle.”

“Our concerns have only been heightened by the continuing situation in Los Angeles, which reports a surge in illegal dumping in downtown LA as businesses reject the zoned system’s higher costs,” the letter went on to say. “At a time when we see our small businesses struggling to survive, the additional cost could stretch their already thin profit margins to a breaking point.

We believe that improvements to the existing system—previously ignored by the Department of Sanitation’s advisory process—are a superior solution that maintain the many benefits of the open-market system while avoiding the chaos, high risks and devastation that would accompany a zone system, which would be impossible to correct once implemented. To the extent that improvements to the commercial waste system are warranted, stakeholders and the city can initiate those discussions immediately—without waiting three to four years for implementation of a zone-franchise system—and generate important progress through collaboration.”

During the public hearing, a signatory of the letter, Nelson Eusebio, director of governmental affairs for the National Supermarket Association, said the CWZ proposal as written would have a tremendous impact on small businesses, such as supermarkets that rely on commercial carters to remove their garbage.

“Many of our members have had long relationships with these carters and establishing waste zones with one exclusive vendor would create a monopoly of the waste zone,” he said. “We are concerned that an exclusive, one-vendor system will lead to a decrease in service. By removing the free-market aspect of the provisions, the bill will force small businesses into a system where they have no bargaining power. For a waste zone system to work in New York City, there has to be more than one vendor in each zone. While we do not support any zone system, if we need one to support the business, we would propose a system where there are at least five vendors in each system so that small businesses have the ability to choose between different providers.”

Moving forward, the City Council is expected to vote on the legislation later this year.