The Power of the Checklist

In my high school driver’s education class, seat belt use was mandatory. After a lifetime of never wearing a seat belt, this requirement was not welcome—it chafed and I felt hemmed in. Back then, no one wore seat belts. Hordes of us would pile into the back of station wagons without regard to them. It was just not normal to use them.

Eventually though, it became second nature and the seat belt holdouts seemed silly. Accident data clearly shows the importance of seat belt use with respect to reducing fatalities. Wearing seat belts is not even a decision anymore. It’s an established habit, a behavior that is automatic and doesn’t even require thought. As a nation, we have created a culture of safety (at least with respect to seat belt use) through a combination of punitive measures and changing of cultural norms.

Can we achieve the same results with industrial safety?

One way to inculcate a culture of safety is with the humble checklist. Atul Gawande makes a compelling case for its use in his book, The Checklist Manifesto. In it, he tells the story of how a B-17 bomber crashed while the plane was being evaluated. Although the crash investigation established pilot error as the cause, newspapers dubbed the B-17 bomber “too much plane for one man to fly.” Boeing, in an attempt to save the plane, developed the first aviation checklist. Since then, checklists have been standard in the aviation industry. Each plane has many checklists covering a myriad of different situations and pilots do not think twice about using them—it is second nature. 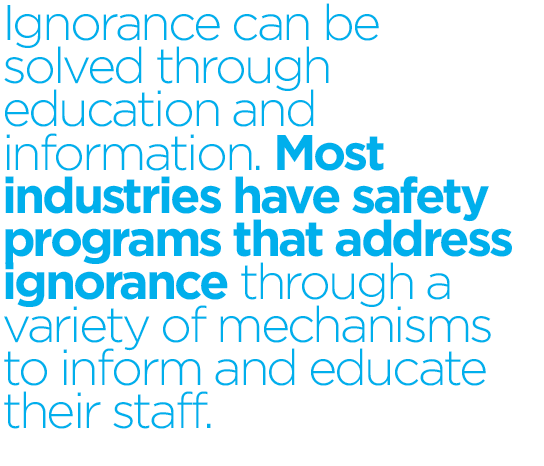 Gawande goes on to show how professionals can successfully navigate the increasing complexity of their responsibilities using checklists. As a physician, he describes the results of one study that showed checklists reduced medical complications and errors.

Incompetence is the simplest problem to solve. People demonstrating incompetence need to be eliminated from the system for their own good and everyone else’s.

Ignorance can be solved through education and information. Most industries have safety programs that address ignorance through a variety of mechanisms to inform and educate their staff.

Today, many failures can be chalked up to ineptitude. Many tasks have become so complex that mistakes are inevitable. It is easy to skip a step or to forget to verify something or to plan for every possible outcome. Thus, checklists.

Despite this, there is a resistance to checklists. Many people feel that their professional training prepares them for the work and checklists are too simplistic. Or, they feel that checklists will prevent them from doing their jobs by lulling people into a false sense of security. Checklists actually do the opposite—well-developed checklists provide professionals with the benefit of previous experience in a short, easily digestible chunk. The best example is US Airways Flight 1549. Capt. Chesley B. “Sully” Sullenberger was flying an Airbus A320 that was struck by a flock of Canada geese causing loss of power. With three minutes remaining, Sully pulled out the plane’s checklists. By closely following the right checklist, Sully successfully ditched the plane by gliding it onto the Hudson River with no loss of life. Sully’s skill as a pilot is not diminished by his use of checklists—but, he certainly benefited from the techniques and processes recommended by the list.

NWRA is trying to break the cycle of ineptitude and provide tools, like checklists, not only to those who work in waste and recycling, but also to the general public, to yield increased safety in our industry. A safety priority for the Association and our members is the Slow Down to Get Around campaign. Disseminating simple instructions to drivers and championing efforts to enforce these behaviors through legislation in various states we expect will eventually make it second nature for someone to slow down around a garbage truck and recognize the role they play in improving safety for all.

For more information on checklists, read Gawande’s book or check out his 2007 article in the New Yorker. Although we are well on our way to eliminating incompetence and ignorance, we need to make sure that we also focus on ineptitude.

Anne Germain is director of waste and recycling technology for the National Waste & Recycling Association and may be reached at (202) 364-3724 or [email protected].