A Blueprint for Recycling: C&D Recycling in Wisconsin

Until four years ago the Wisconsin Division of Facilities Development (DFD), the agency responsible for building and maintaining all state-owned properties, did almost no recycling on state building projects. Since January 2008 however, when Wisconsin started to require recycling on some projects, more than 140,000 tons of construction and demolition (C&D) waste has been diverted from landfills, representing a project cost savings of more than $4 million.

What led to this turnaround? How did this state agency go from recycling almost none of its waste to diverting more than 90 percent of it from landfills? 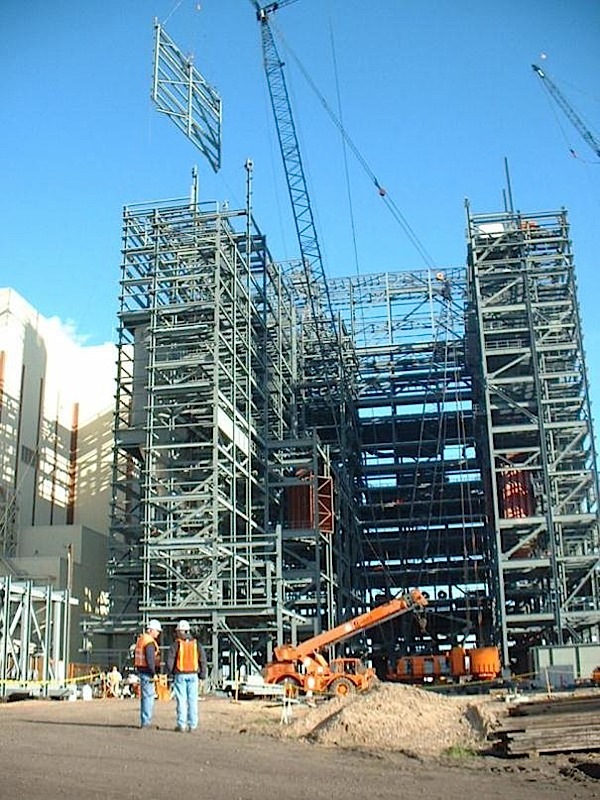 The story begins back in 2006 when the Wisconsin Building Commission, a Governor-appointed board with authority to allocate state tax dollars for building projects, adopted a Sustainable Buildings Policy that required state properties to use “sustainable practices in the planning, design, construction, operation and maintenance of all state facilities.” DFD staff, the operational arm of the commission, was directed to establish standards and specifications to implement the new policy. Utilizing published standards from the U.S. Green Building Council, the American Institute of Architects and other “green” building programs DFD assembled specifications and guidelines that would, among many things, increase energy efficiency, decrease pollution, improve water efficiency and minimize waste in state facilities and building projects.

Some of these standards though, were voluntary – particularly those related to C&D waste. Construction, demolition and renovation project contractors were “required” to recycle and divert waste from landfills, but there was no reporting requirement and no enforcement mechanism. The result was that some contractors recycled waste materials, some did not, and no consistent record was kept to document the success or failure of these programs.

As one DFD staffer put it, “If everyone knows there is no cop on the road, is there really a speed limit?”

Meanwhile, another state agency, the Wisconsin Department of Natural Resources (WDNR), became concerned that the state’s landfills were filling rapidly and that construction and demolition related debris accounted for a substantial portion of the waste, nearly 30 percent. The agency had grant funds available for the development of innovative programs that would address major waste and recycling issues on a statewide basis, and they sought proposals. 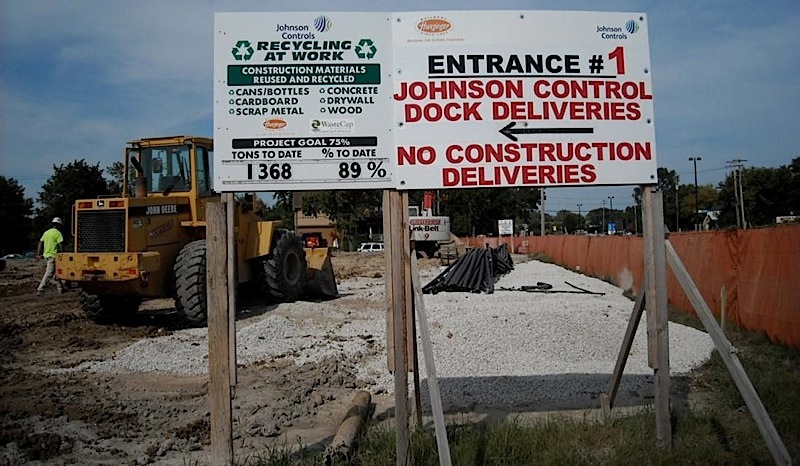 WasteCap Resource Solutions, a Wisconsin-based non-profit company that had experience in conducting construction waste management programs on state building projects, filed a grant application with the WDNR that proposed to help the Facilities Development agency test its new construction waste management and waste diversion guidelines on five projects widely distributed around the state. The goal of this test was to see if the DFD could implement a minimum standard of a 50-percent recycling/diversion rate on its projects throughout the state. Most believed that the standard was realistic in the urban areas of Wisconsin, but many doubted that it was achievable in the state’s more rural areas.

In a rare display of intergovernmental cooperation, the WDNR agreed to fund the program. The department reasoned that if the program was successful, it had the potential to significantly impact the amount of C&D material that entered landfills, not just through the diversions realized on the state projects themselves, but also because the program would expose many state contractors to how construction recycling management programs can work and how they can reduce project costs. This new knowledge would then hopefully be carried over to the contractors’ other, non-state projects.

Work on the pilot projects began in early 2008 and continued through 2009. The five projects in the study included the construction of a new residence hall on a University of Wisconsin campus in Kenosha located in the southeastern corner of the state, all the way to the demolition and construction of a new student union building in Superior, 400 miles to the northwest. Three additional new construction and renovation projects were located in other regions of the state.

WasteCap worked with the general contractors and DFD staff on these projects to set up the waste management and recycling programs, and helped educate the workers on the projects in best methods and practices. They also helped find outlets for the materials that needed to be recycled and kept records of the results.

Those results were impressive. Every project in the study easily met the 50-percent waste landfill diversion standard. In fact, the average recycling rate for all projects was a remarkable 84.8 percent with more than 40,000 tons of recycled debris. The savings in project costs by avoiding tipping fees was estimated to be more than $1 million.

Back to the Drawing Board

The pilot program was so successful that it gave DFD the confidence to require a minimum diversion rate of 50 percent on all demolition projects and on all major new construction projects beginning in 2010. It also required that these projects collect recycling and diversion data and report their results on a regular basis. 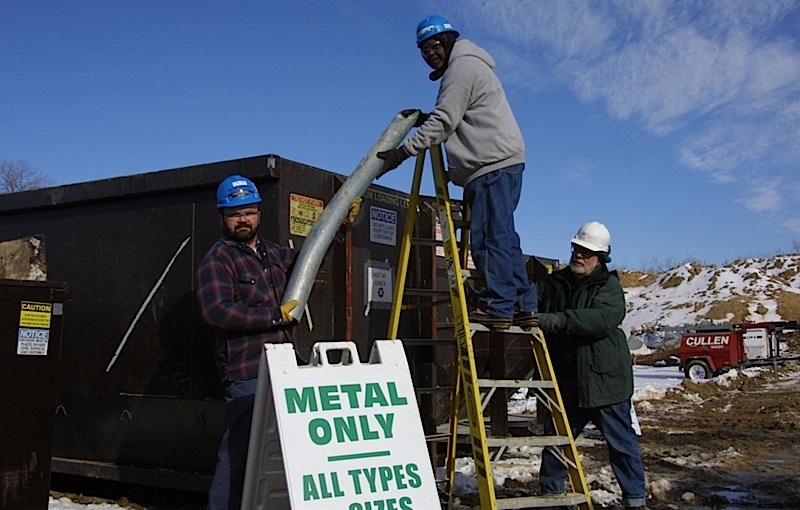 “At that point we figured we were pretty much done,” says Ralph McCall, senior project manager for WasteCap and the principal point man on the DFD work. “The program had proven it was cost effective in all regions of the state,” he said. “Markets were available for the materials that needed to be recycled, and the contractors could see the benefits.” More work was needed to perfect the centralized reporting system, McCall adds, and DFD staff needed some training on how to administer the program, but it was felt those were minor details that would soon be ironed out.

As it turned out, WasteCap seriously underestimated the complexities involved in making changes, even small ones, in the way DFD conducted its business. DFD has about 100 employees organized into two bureaus and five sections. As became clear, any change in procedure in one section inevitably affects someone or something in another section.

For example, DFD knew that in order to implement their recycling policy the recycling specification and requirement needed to appear in the bid and contract documents for a project, but while the Bureau of Architecture and Engineering recognized the need, it was the Bureau of Capital Budget and Construction Administration that needed to alter the documents. This required discussion and time. And project contracts were not the only issue.

The online waste reporting system that was developed for DFD needed to be integrated with the DFD system, which required the assistance and cooperation of the DFD’s information technology section. How recycling would find its way onto the agenda for project management meetings was an issue. Who would review the contractor recycling reports and how the recycling rules would be enforced all became topics that needed to be discussed and worked out.

One of the biggest stumbling blocks was determining what criteria would be used to select projects for the mandatory recycling rules and where could the rules be relaxed a little. In theory, the Building Commission’s Sustainable Facilities Policy requires recycling on all DFD projects, but in a practical sense it may not apply in all cases. The feeling was that it was probably not necessary for a contractor to file a waste management plan and submit recycling reports when the project only involved a one-month time frame. DFD staff felt they needed some flexibility in enforcing the rules.

“As we worked our way through the issue it became apparent that there were three broad categories of projects – major projects of more than $5 million in capital cost, small projects of less than $150,000, and medium-sized projects that cost anywhere from $150,000 up to $5 million,” says McCall.

It was clear that major projects would be required to adhere to the recycling policy, according to McCall. Contractors would be expected to file a waste management plan before beginning work, report their recycling results each month in the DFD reporting system and file a final recycling report at the conclusion of the project. Failure to do so would result in the delay or withholding of payment to the contractor.

Small projects would still be required to recycle, but they would not need to file a plan or report their results, McCall said. If the contractor does some recycling they are encouraged to report it, but it is not required. 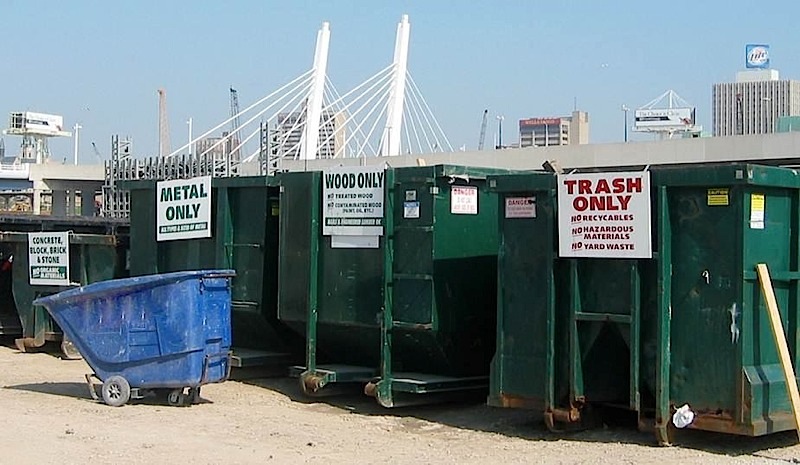 The level of recycling required for medium-sized projects will be established during the design phase. During design, DFD project managers and the architect will determine the appropriateness and extent of recycling required based on project specifications. Some projects, like a $4 million upgrade of a University of Wisconsin campus building, may not necessitate any recycling plan or reporting; whereas another, like a $2 million addition to an office building, may be appropriate for inclusion in the program.

In the end DFD made significant modifications to its Policy and Procedures Manual to explain the program and define staff and contractor responsibilities, and of course the specification and contract language was changed to accommodate the new rules.

In four years, with only partial implementation of the recycling program, DFD has gone from recycling zero project waste to recycling about 90 percent of it at a savings to the projects of around $1 million each year.

Perhaps more importantly the DFD program is helping to usher in a new generation of contractors who are familiar with recycling techniques and their potential to reduce project costs, yielding benefits for DFD, the contractor and the environment.

Joe Liebau Jr., has been with Milwaukee-based WasteCap Resource Solutions for three years, and was recently named executive director. He has been involved in environmental issues his entire life. Currently, he is working on large construction projects offering waste reduction and recycling services.