UCB’s Krasnow Thinks Outside the Box 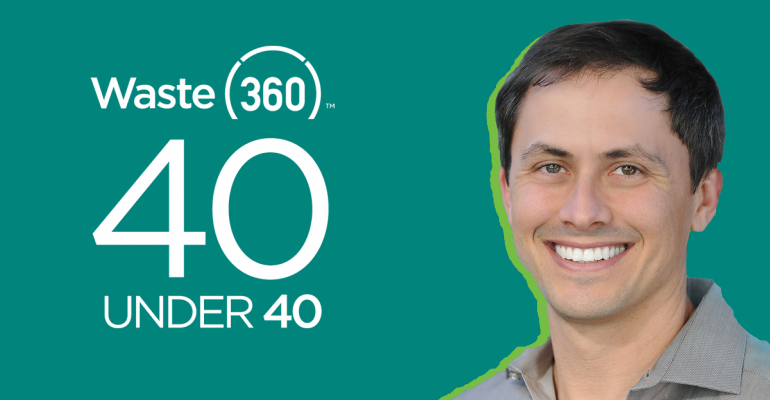 Since joining UsedCardboardBoxes (UCB) in 2006, David Krasnow has helped to transform the company into a multimillion dollar enterprise. His focus on designing a more effective software to track their programs, implementing more technology into the company’s processes, and utilizing his experience as a venture capitalist played a key role in the company’s growth. Now, UCB is the largest processor of used Gaylord totes, produce bins and shipping boxes in the US.

Krasnow, a 40 Under 40 award recipient, spoke to Waste360 about his journey with UCB, as well as the brand’s expansion with UCBZeroWaste.

Waste360: What are your roles at UCB and UCBZeroWaste?

David  Krasnow: I'm both the Chief Operating Officer and Chief Financial Officer of UsedCardboardBoxes and UCBZeroWaste. I helped found the company with Marty Metro, the CEO, back in 2006, and my role and responsibility as COO and CFO is overseeing all the operations and finances of the company.

With UCBZeroWaste we've really been designing that company as we've been running another company. I've been responsible for building that. [For our clients] that’s making sure that we're overseeing all the waste for them, coming up with strategies for how to reduce that waste, and building all the technology to track it.

David  Krasnow: The company was started because when Marty was moving, he saw how expensive brand-new boxes were, and he didn't want to buy them brand new. He was trying to find used boxes and struggled, looking in dumpsters and things like that for boxes. The idea was born of collecting boxes from people and connecting them with people that needed to move. That spurred a lot of iterations of the company.

At the time, the model was a retail model and he got introduced to the venture capital firm that I was at, and we said, we're interested in investing, but not under the model of connecting movers. We thought that there was still a market for that, but we wanted to think bigger. Getting boxes from businesses to businesses would be a much more scalable company.

We found that there were lots of companies getting rid of boxes by what I like to call the technical term, the “gagillion.” We then found other companies that needed low-cost boxes for distribution or for collecting recyclables or exporting. We provide used boxes and Gaylord totes for them. They save lots of money, it's a great environmental story, and it gets people more money than the OCC [old corrugated containers] rate.

Then, we were working with big manufacturers and they came to us and said, "Look, you're doing an amazing job. You're paying us more than anyone else. You have this amazing software that tracks it all. Can you help us with everything else?"

At first, we said, "No, we're the box guys," but we saw that there was a change in the marketplace and there was an opportunity to help companies with managing and tracking everything. That's how UCBZeroWaste was born.

Waste360: What services does UCBZeroWaste offer?

David  Krasnow: A lot of the companies that we serve at UCBZeroWaste are consumer packaged goods companies. We will take over the management of any solid waste stream. We try to move things from the trash to recycling and recycling to reuse.

We built in-house software that tracks everything for multi-location companies with graphs, charts and landfill diversion rates, over time. We try to help them move towards their zero waste goals as cost effectively as possible, but also track it so that they can see their improvement.

Waste360: What are some of the challenges that you've tackled?

David  Krasnow: A lot of these big companies are so focused on their core business and they want to do the right thing, but they just don't know how. There are so many interesting companies that have solutions for these manufacturers and the manufacturers don't even know about it.

These are things that companies are just throwing out, spending hundreds of thousands of dollars a year. They just think of it as the cost of doing business. Bringing in those new ideas is a challenge, but that's where you get the big results.

Waste360: You helped to implement employee benefits and compensation that allows employees to reap the benefits of their success. As a COO, what is the corporate culture you're trying to cultivate?

David  Krasnow: We tell people, “The world is your oyster at UsedCardboardBoxes.” We don't set limits on people. We want people to be hungry and aggressive, and we incentivize people to do that.

We have laborers that are sorting boxes, and generally speaking, they're above minimum wage, but they're not high paying jobs. It's just basic warehouse labor, sorting and stacking boxes. We implemented a program where they could share, and the more that they sort, the more money they get. It’s not based on hourly. We had one gentleman, he made $65,000 last year as regular warehouse labor, making multiple times that of other people.

Everybody in the company has some sort of compensation that grows with the company hitting its goals or them doing better. That way, everybody has a stake in the company. We put in a sale program for our salespeople, where if they sell a certain amount, we get them a company Tesla. We've gotten multiple people company Teslas. We're very creative. We like to make sure that people share in their success. At the same time, we also have high expectations, and we expect you to work hard.

Waste360: What is on the horizon for your company?

David  Krasnow: In terms of UsedCardboardBoxes we have three of our own locations, and our goal is to open up more. We're also interested in acquiring some companies to help us grow our physical footprint.

On the ZeroWaste side, we've been really pushing hard to get some more big national names. One of our favorites is McCormick. They were named the most sustainable food manufacturer in the world by Corporate Knights. We run their entire sustainability program throughout North America. We're excited to expand that to more companies.

Also, a lot of the software we use internally is for our own clients, but we're hoping to launch a version that can be used by anyone. We're looking at doing that sometime this year.