Industry Builds the Future of Recycling Amid China Ban Woes 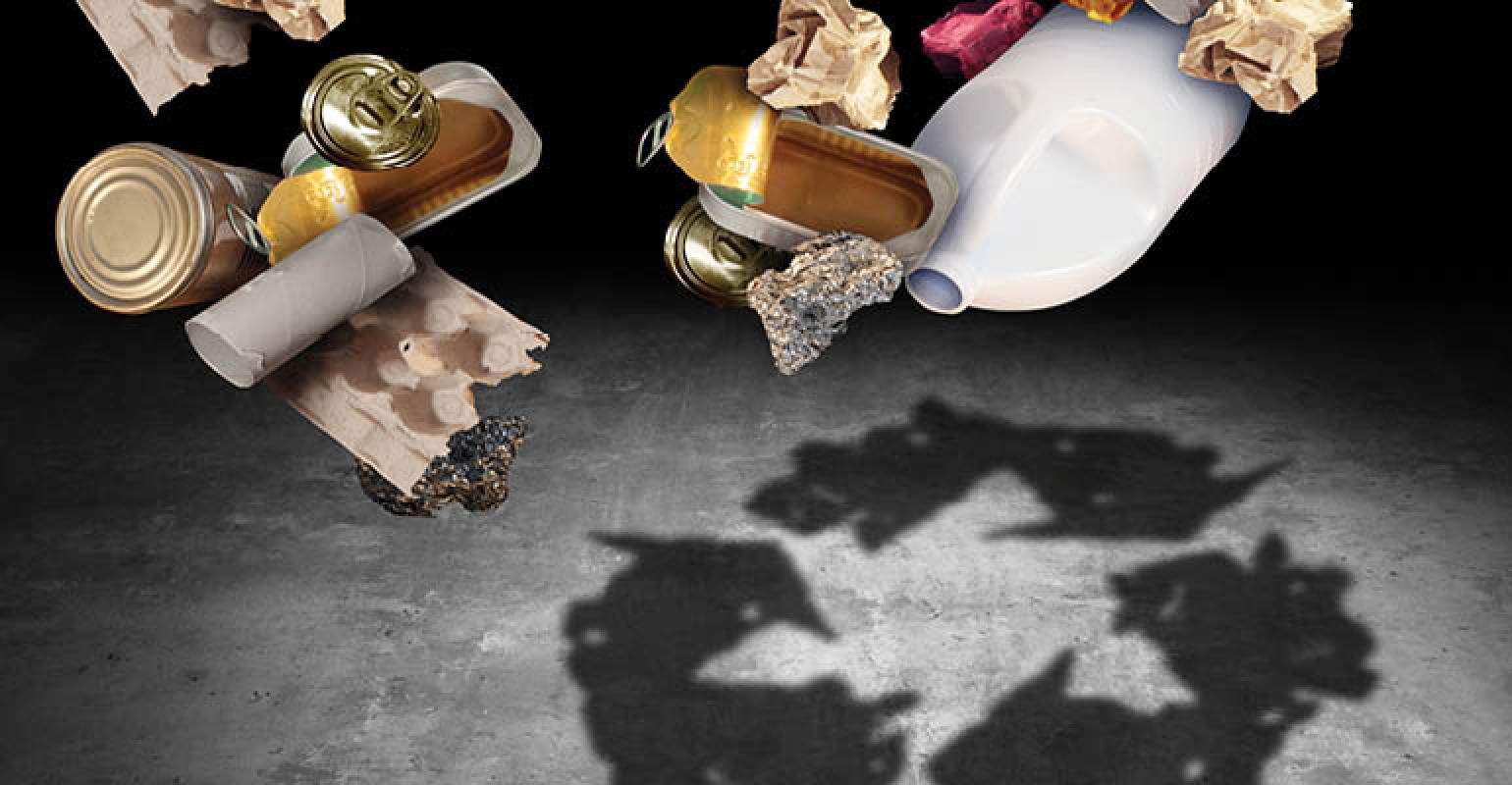 SWANA, Waste Management and the city of Fort Worth, Texas, discussed the impact of China’s waste import ban and contamination standard in a recent webinar.

The waste and recycling industry in North America and elsewhere is feeling the impact of China’s waste import ban and 0.5 percent contamination standard, which went into effect earlier this year. Many companies and individuals are seeking new markets for materials, and some have even been forced to landfill materials to relieve some of the excessive processing costs and buildup of materials.

In a recent webinar, “Beyond China: Building the Future of Recycling,” hosted by the Solid Waste Association of North America (SWANA), David Biderman, executive director and CEO of SWANA; Susan Robinson, director of federal affairs at Waste Management; and Robert Smouse, assistant director of solid waste for the city of Fort Worth, Texas, discussed the current situation in China, how it’s affecting the waste and recycling industry in North America and what the industry can do to overcome the challenges that come along with China’s waste import ban and contamination standard.

“As we approach the one-year anniversary of China’s announcement that it would be imposing waste import restrictions, it’s important to recognize that the announcement wasn’t written on a blank slate,” said Biderman in the webinar. “Four years earlier, Green Fence was launched to increase inspections of imported recyclables, educating people in North America about the importance of not sending garbage over in recycling bales. National Sword began in 2017 … and since the ban went into effect [in January 2018], the industry has faced a variety of changes, challenges and questions. At SWANA, we want everyone in the recycling chain to have the same information and to be aware of the situation so we can make decisions based on accurate information.”

To stay up-to-date on the news coming out of China and to let government officials know how the country’s actions are impacting the recycling industry in North America, SWANA is in communications with the U.S. Environmental Protection Agency and other federal agencies like the U.S. Department of Commerce and the U.S. Trade Representative. Additionally, SWANA is relaying that information back to the North American recycling industry via a series of updates. The third update in the series was released earlier this month.

SWANA also recently established a Recycling Task Force to provide guidance concerning the challenges facing recycling programs in both the U.S. and Canada. The Recycling Task Force is focusing on three main areas: reducing contamination and improving the quality of materials at materials recycling facilities (MRFs), creating demand for recycled content and developing an opportunity to get federal funding for recycling infrastructure, education and programs. 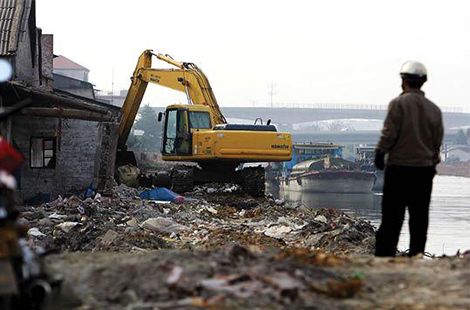 “A year ago, more than 200,000 tons of mixed paper and about 75,000 tons of scrap plastics were sent to China, and now, in the first quarter of 2018, nearly zero tons were sent due to the new restrictions,” said Biderman. “In the short term, we need to prioritize education, update technology in MRFs, identify new markets for materials and be more transparent about costs associated with recycling as well as the revenue that’s generated from the sale of recyclable material.”

One large key player in the industry that’s feeling the impact of China’s waste import restrictions is Waste Management. In the first quarter of 2018, the company saw a 36 percent decrease in average recycling commodity prices at its recycling facilities and an uptick in operations costs and transportation costs due to making the switch to send materials to areas like Vietnam and India. Some of those areas are now establishing criteria and launching bans of their own because the material is too much for them to handle.

“I think of our current situation as a chapter in a story, and it’s not one point in time but a 30-year-old history,” said Susan Robinson, director of federal affairs at Waste Management, in the webinar. “The story is one that doesn’t have a final chapter because policy changes are likely to continue into the future. As an industry, we need to remember that recyclables are feedstock and used to manufacture products, and that right there is the reason why we will make it through these current challenges. Markets may look different in the next couple of years, but if we rethink our recycling programs, we can make them more resilient.”

China is a resource-poor country and a larger exporter and manufacturing country, according to Robinson. By the end of 2016, 30 percent of all recyclables in the world were imported into China, including 50 percent of all paper and plastics that were recycled. The U.S. alone shipped 30 percent of its material to China.

“Waste Management is the seventh largest exporter of anything out of the U.S.,” said Robinson. “In 2017, about 27 percent of our fiber went to China, and in 2018, that number was down to 5 percent. In May, that number was actually zero, and we are very close to zero now [for the month of June].” 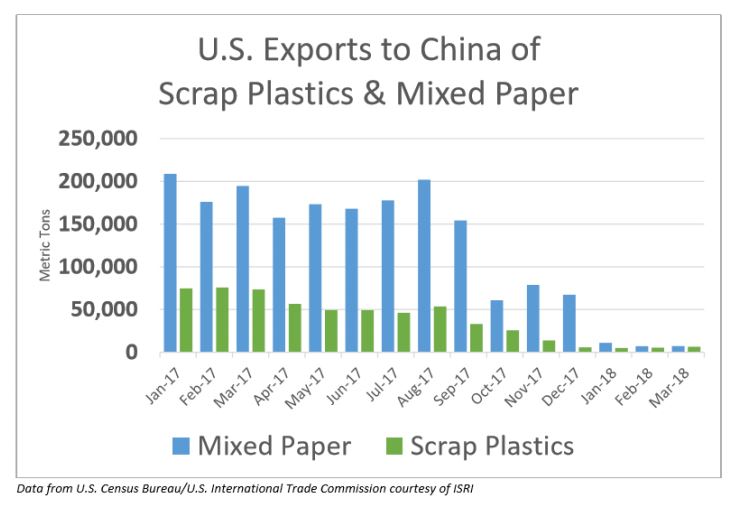 Part of this decrease is due to the change in shipping patterns. According to Robinson, containers may not be in the right place, and it’s both expensive and hard to get shipped first because the containers may end up in parts of the world where they can’t be filled with product to come back.

As China moves forward toward achieving its goals of reducing carbon intensity by 40 to 45 percent below its 2005 levels by 2025, cleaning up water in key river basins by 70 percent, achieving self-efficiency by 2020 and improving its overall environment, the country’s communist party recently outlined a strategy for reducing pollution and affirmed its intention of eliminating imports of recyclables by 2021.

“By the end of 2018, China will close the door to all post-consumer plastics,” said Robinson. “Any baled PET or HDPE won’t be allowed in unless it’s been processed into pallets or flakes. In North America, mixed plastics have very little to no market … When our MRFs were first designed, they were designed to handle different material. They weren’t designed to handle deli trays, yogurt cups, etc., but now we are seeing newer technologies that allow us to handle those types of materials.”

While MRFs are integrating these new technologies to recycle more material, they are also facing the ongoing challenge of contamination. Part of this issue is due to more municipalities and companies making the switch to single stream recycling. While single stream recycling often causes an uptick in more material being sent into the recycling stream, that material isn’t always recyclable because businesses and residents may not know what can and cannot actually be recycled so they just start placing everything they can in recycling bins. 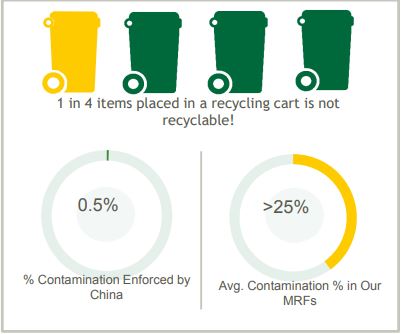 “For every 2,000 pounds of material collected, about 450 pounds is contamination,” said Robinson. “That number has climbed over the years because material has been making it through the MRF and into bales that are sent to end markets. This has driven up our cost because we now need more labor to start pulling out that contaminated material before it ends up in bales.”

To help educate residents and businesses on proper recycling, cities like Fort Worth, Texas, are conducting audits with their haulers and leaving tags on bins to inform residents of which materials cannot be recycled. 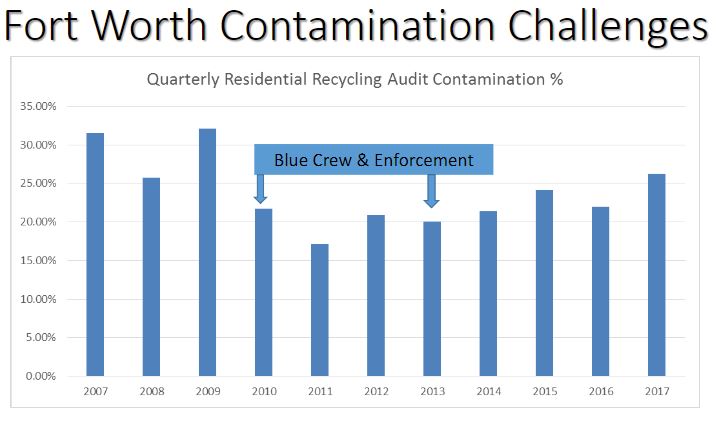 “In an effort to reduce contamination, we created a Blue Crew that randomly goes out and audits recycling carts in neighborhoods before recycling services are completed,” said Robert Smouse, assistant director of solid waste for the city of Fort Worth, in the webinar. “If the crew sees something in a recycling bin that shouldn’t be in the bin, they will leave an oops tag to inform the resident. If there is a large amount of material that isn’t supposed to be in the bin, they will remove those items from the bin and place them in a clear recycling bin with a $10 fine notice. If residents continue this gross behavior, we will remove their recycling bin and replace it with a larger trash bin and not allow them to participate in the recycling program for six months.”

In addition to the audits and oops tags, the city is utilizing catchy saying like “Recycle this, not that” and informative labels with specific instructions and guidance on its bins to help residents further understand what can and cannot be recycled. 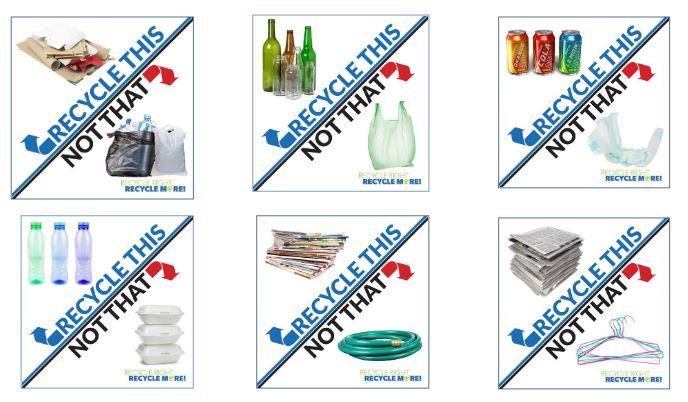 “Quality is key, and we are really starting to move toward improving quality in response to the moves from China,” said Smouse. “High contamination levels have cost the city over five times as much to process materials as recycling and dispose of non-recyclables as it would just to recycle materials properly. In fact, majority of our cost is processing. Overnight, from March 31 to April 1, our cost went up to $50 per ton.”

As these companies and municipalities make adjustments to comply with China’s waste restrictions, they are starting to rethink how recycling programs are run and how they can get the best bang for their buck for materials.

“As the cost of recycling increases, maybe we should start focusing more on upstream recycling, which is really where we get the most environmental benefits,” said Robinson. “Recycling is one tool in the toolbox to achieve the goal of improving the environment, and we need to focus on recycling correctly. When we accept a huge list of materials, we send the message that we want everything, and I think that increases confusion at the bin. By bettering our education efforts and improving the quality of materials, we can maneuver through this market challenge and create a better future for recycling.”